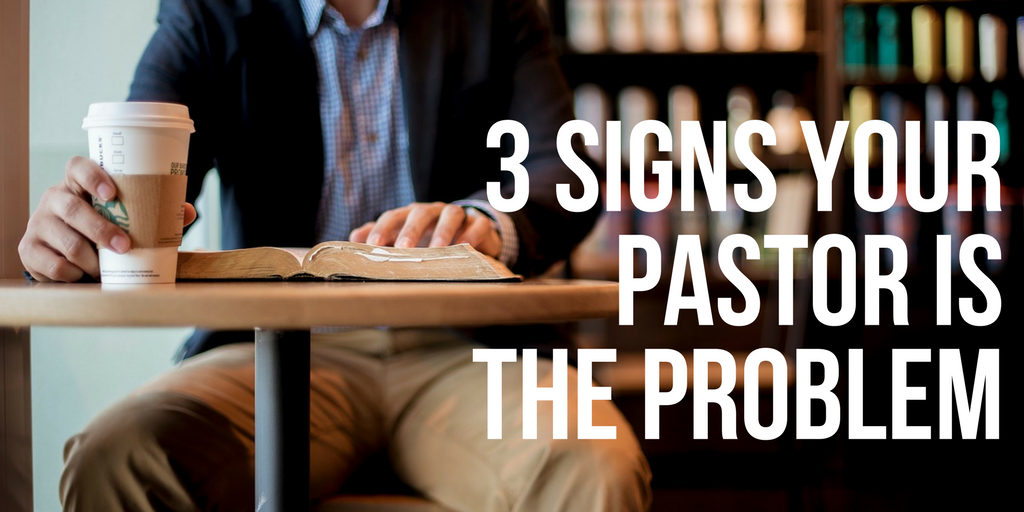 Most pastors are not bad people. I obviously don’t know the heart of every pastor on the planet, but I do know that if someone has chosen to be a pastor it’s likely they got into the ministry to honor God and help people.

Therefore I believe Christians should give their pastor the benefit of the doubt for as long as they can without being unwise or naive. But let us not assume that just because someone becomes a pastor they are definitely not a problem for the church.

So here are 3 common signs your pastor really is the problem in the church.

1.A Bad Pastor Will Teach You He Could Never Become a Problem

One of the major problems I see when it comes to disciplining a pastor is that many in the church simply refuse to believe that their pastor is capable of sin or of disqualifying himself from the pastorate. Before the evidence is even presented they have already decided it is impossible for their pastor to actually be the problem.

The Bible warns Christians about false teachers, false prophets, and wolves masquerading in sheep’s clothing because they actually exist. The Bible warns Christians about bad pastors because there really are bad pastors in the world. In Matthew 7:15-16 Jesus said, “Beware of false prophets, who come to you in sheep’s clothing but inwardly are ravenous wolves. 16 You will recognize them by their fruits.”

When Jesus said “beware” and that they will come “in sheep’s clothing,” he meant this. It should be no surprise that those who are false prophets are those you would never imagine to actually be a false prophet. A bad pastor will actually train his flock through persuasive, repetitive, mind-numbing teaching that subtly makes the point that he could never actually be an issue for the church.

Assuming the best when there are clear signs the pastor is a problem is unbiblical. Having a predisposition that your pastor could never actually be a problem is the first problem that needs to be fixed in a church with an unhealthy leader. The church cannot be helped and the pastor cannot be disciplined if those involved have lifted the pastor so high he is absolved from normal accountability.

2. A Bad Pastor Always Points the Finger and Is Always the Victim

A pastor should be defensive if he is accused of wrong doing in an unbiblical way. If there’s a witch hunt in the church to remove the man at any cost, then of course he should point these flaws out in those who are making the accusations.

Most people refer to Matthew 18:15-20 when rebuking a pastor. However, that passage is more related to individual offenses between two Christians. If a pastor has sinned against you personally, of course you should use this passage. However, when a pastor is doing something wrong but it may not be directly against you, there is a different route to be followed. 1 Timothy 5:19-20 states:

Do not admit a charge against an elder except on the evidence of two or three witnesses. 20 As for those who persist in sin, rebuke them in the presence of all, so that the rest may stand in fear.”

Accusing a pastor of wrong doing is not wrong. It is only wrong if you do not follow this biblical model. If this biblical model is followed and a charge is brought to the elders about a pastor from multiple reliable sources and there is observable evidence (not just judgments on the person’s motives), then the pastor in question should not be defensive.

I’ve heard of instances where this biblical model was followed, but some in the church were so reluctant to believe a group of reliable men, they trusted one man (the pastor being accused) instead of the group. Ironically, if the pastor cries out that he is being wronged by these men and he is the only one saying this, he is violating 1 Timothy 5:19-20. He makes an accusation against the elders, pastors, or congregants opposing him, but he alone is the one making these claims. He is accusing without the support of witnesses. If the church listens to his return fire on his accusers even though it is his word against the groups, a big problem will occur and the problematic pastor will persist in sin and ruining the church.

3. A Problematic Pastor Usurps the Other Elders or Forces Them Out

So your pastor really may be the problem when he’s confronted and his response is that the accusers are lying. It’s a double red flag when his next statement is that not only are they lying, you as the congregant must never talk to them again. How convenient?

A good pastor will encourage you to weigh through the evidence, but they will just caution you to truly rely on the facts, or lack of facts, and not persuasive words. A bad pastor will not only accuse those who followed the biblical process of rebuking the pastor while calling them liars, but they will also encourage their sheep to outcast the accusers before they can even share their concerns so their voice is silenced.

An unhealthy pastor will usurp the elders, or run them out of town, and then accuse them of not staying and abandoning the flock. If no one is available to talk accept the head pastor in charge, it probably means that head pastor has total control, has a figure head elder board, and has made sure those with real information about his sin are unable to speak with the congregation.