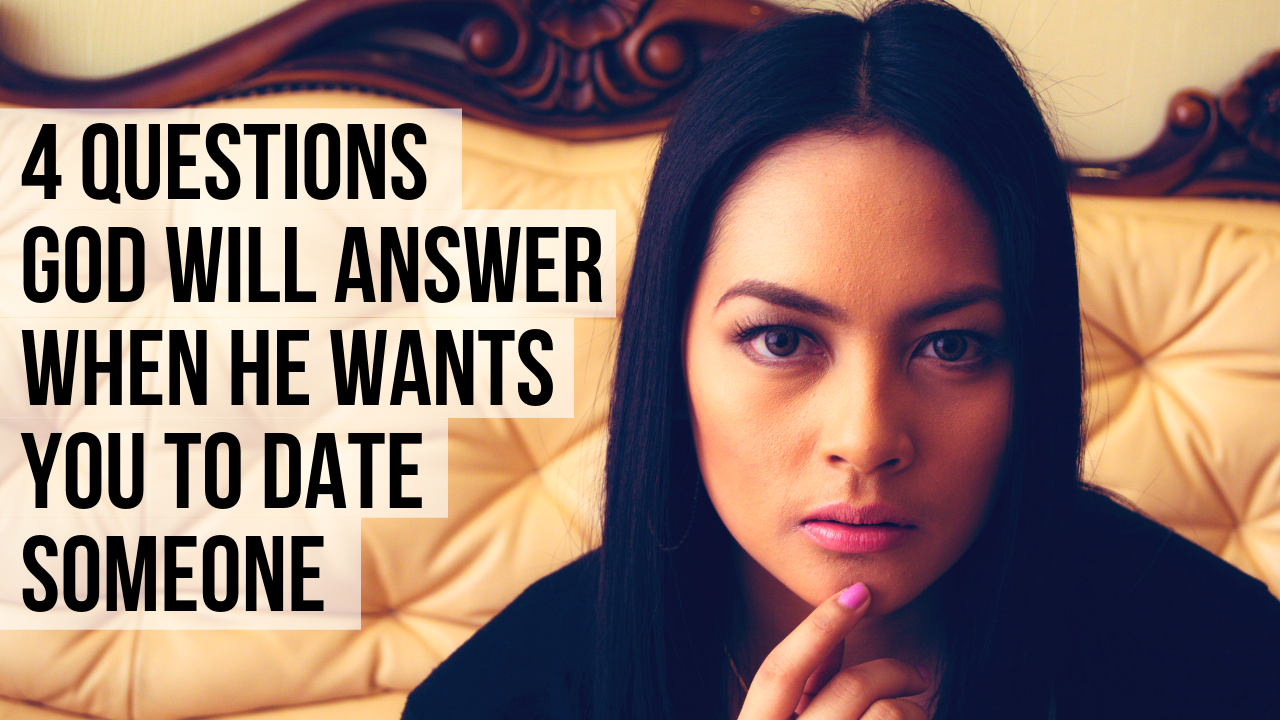 There are many different approaches to Christian dating, all of which have their pros and cons. Some people are very cautious and guarded while others are much more open and willing to date someone faster.

The benefit of being quicker to date someone is that you don’t overthink it and you allow the relationship to progress without a lot of pressure. However, one of the dangers of being quick to date is that you are more likely to get hurt when you don’t know the other person that well.

With that said, I believe a Christian single person who wants to honor the Lord and protect their heart while dating should seek God’s answers to these 4 questions before entering into an official relationship with someone.

1. When God Wants You to Date Someone, He Will Answer the Question, “Is there a parallel between this person’s words and deeds?”

Most Christians know that 2 Corinthians 6:14 teaches us that we must be equally yoked in our relationships. However, many of us interpret that as simply meaning if someone proclaims with their mouth that they are a Christian, then you are allowed to date him or her. In the Bible, however, proclaiming Jesus Christ as Lord with your mouth is only the first sign of a Christian. In addition to openly stating their faith in Jesus, they also must then live their life in such a way that shows they truly are a Christ follower.

Notice what Proverbs 20:6 states, “Many a man proclaims his own steadfast love, but a faithful man who can find?” This verse means that many people say the right thing. It’s easy for a man or woman to tell you that they love God and that they love you. But as this verse explains, many people “proclaim” this and yet their behavior is not faithful over time and thus their words are proved false. The meaning of Proverbs 20:6 is clarified further by what is stated just a few verses later in Proverbs 20:11, “Even a child makes himself known by his acts, by whether his conduct is pure and upright.”

So when God wants you to date someone, he will make it clear that you are equally yoked. But this will not happen merely through words but also through observing the way this person lives their life.

2. When God Wants You to Date Someone, He Will Show You the Answer to the Question, “Am I rushing into this relationship or acting in wisdom?”

There’s two common problems that happen when a Christian single person is wondering if God does or does not want them to date someone. One problem is that they want all the answers before anything happens. They want God to reveal their entire future with this person before they will feel comfortable moving forward. God rarely does this. He will rarely tell you that you are going to marry someone before you have even dated this person. Oftentimes God will only reveal the future once we start moving forward in the present. If we never act before we know everything about the future, we will always stay stuck right where we are at.

On the other hand, however, it is also a common problem to rush ahead too quickly and hurt oneself in the process. Sometimes a Christian single person can want a relationship so bad that they do not take the time to truly ask the Lord for guidance and wisdom. Or they rush the process of hearing God and end up hearing what they want rather than what God is actually saying.

With all that said, I don’t believe there is a perfect formula for every start to a dating relationship. Some people will be more nervous than others. Some people will need to be friends for a year first and others may feel led to start dating after a week of knowing someone. I’m not here to go beyond what the Bible actually says. I don’t believe in telling everyone that all relationship situations are the same. However, what I do believe is that before God will release you to date someone, he will give you the peace that you have done your do diligence to seek God’s guidance.

This doesn’t mean that if you feel led to date someone but it doesn’t work out that failed and didn’t hear God. Rather, it just means that before you date someone you truly pray about and feel released by God to progress forward. God won’t take away all the risk and reveal everything to you, but you should feel released to at least give this relationship a try before you start dating someone. For as Proverbs 20:25, “It is a snare to say rashly, ‘It is holy,’ and to reflect only after making vows.” This verse means that you should seek God’s guidance before you make a decision and not after.

3. When God Wants You to Date Someone, He Will Show You the Answer to the Question, “Do I really have to date this person to find answers to the questions I still have or do we need to get to know each other more in the season we are currently in?”

Why won’t God let people skip the dating process and just reveal everything to a couple so that they can jump right into marriage? Why is it unwise for a man and woman to go from a season of friendship right into a season of engagement and thus skipping their season of dating?

One of the reasons God requires that his people figure out the path he wants for them through taking small steps forward rather than huge jumps forward is because each season of life answers important questions for us. It is my belief that the most idea timing for the start of dating relationship will be based on need rather than on want. In other words, it is wise to start dating someone when you need to date them to figure more information out rather than just dating them quickly because you really want to.

You can figure out if someone’s words and deeds match by being friends with them or by going on a few dates with them first. You don’t have to enter into a committed dating relationship to learn this important information. However, if you want to know if you two are romantically compatible and if you two truly do want to be together in marriage one day, you will certainly have to enter into a season of dating rather than remaining in a season of friendship.

So when God wants you to date someone, he will make it clear that you need to date them to find the answers to the questions you have. He will show you that you have taken advantage of the season you are in now and to progress forward you will need to enter into a new season with this person. For as Proverbs 20:4 states, “The sluggard does not plow in the autumn; he will seek at harvest and have nothing.”

4. When God Wants You to Date Someone, He Will Show You the Answer to the Question, “Am I acting in integrity or am I lying to myself and to God?”

Everyone watching reading this article has a unique situation. There will be some similar questions we all have, but there will also be many unique questions that only pertain to you. So one of the main ingredients to entering into a dating relationship in a way that is pleasing to the Lord is that the people involved are acting with integrity and truthfulness. As Proverbs 20:25 states, “Bread gained by deceit is sweet to a man, but afterward his mouth will be full of gravel.”

When we lie to ourselves so we can do what we want, things might go well at first but eventually the lies will catch up to us. It’s not easy to live with honesty, but in the end it will save you so much trouble and heartache.

So God will not tell you everything about this relationship. He will not guarantee it will work out the way you thought it might. You might marry this person or you might break up. But one sign that God does want you to give this relationship a try in dating is when he reveals that you truly are acting in honesty and not deceiving yourself so you can date this person even though you know God is saying no.

You won’t know the future, but you should know you are moving forward authentically, with biblical motives, and with good intentions before dating someone. If you feel you are deceiving yourself to make this work, resist this and submit to God. You won’t regret it.