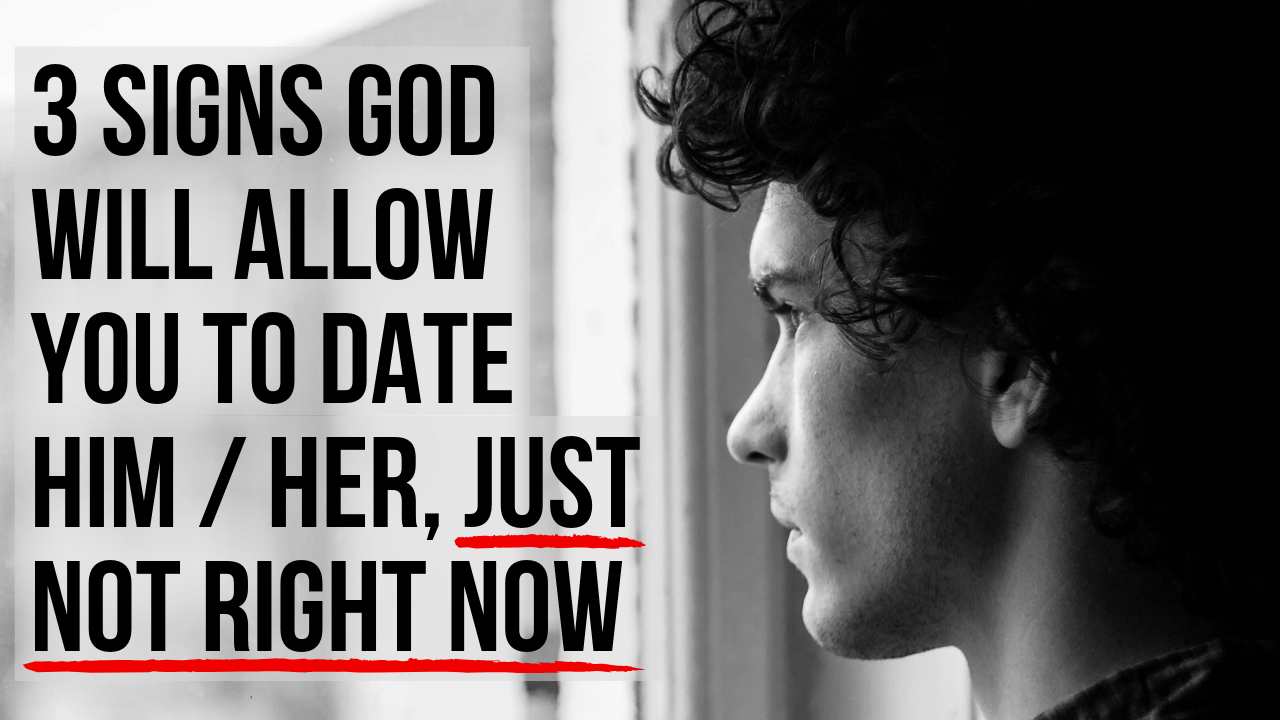 One question I get a lot is, “How can I know if me and this person I really like are meant to date but just not right now in this season of life?” Another variation of this question is, “How do I know if my ex and I will ever get back together? Should I wait for them or is God telling me to fully move on?”

Normally God is telling you to move on. It is far more likely that when a relationship does not work out, it will also not work out in the future if you were to try it again. Additionally, when you like someone but they do not like you in return, normally it’s far more likely that this will remain the same no matter how long you wait for this person’s feelings to change.

Sometimes, in rare instances, however, I do believe it is possible for a relationship not to work out because God is planning to bring these two people together in the future and not right now. I personally know of a few instances of this happening.

So here are 3 scenarios where God may lead you to date someone but just not right now.

1. If You and This Person Both Like Each Other But You Both Also Know You Are Not Prepared to Be in a Godly Relationship, This Could Be a Sign that God Will Bring You Back Together in the Future

Notice the emphasis I am placing on the word “both.” Normally what happens in a relationship that does not work out is that one person wants to be together but the other person does not. Or, what is also common, is that both people realize after a season of dating that God does not want them together and thus the breakup is mutual.

What is a rarer is when two people genuinely like each other but they also both recognize there is some sort of issue in each of their lives individually that will prevent them from honoring God together in a relationship.

Perhaps the most common example of a situation like this is when the issue is being too young. Sometimes a young man and a young woman both truly like each other but the Holy Spirit convicts them that they are not individually mature enough in the Lord to be in a serious relationship at this point in their lives. This scenario can certainly happen with older adults as well, but it more commonly occurs with younger people.

While I believe situations like this are rare and thus in most cases two people should not wait and put other relationships on hold in hopes of being with this person in the future one day, I do believe it is possible for this to happen when both the man and woman realize they like each other but they both individually need to mature more in the Lord first. For as the Song of Solomon 8:4 (NIV) states, “Daughters of Jerusalem, I charge you: Do not arouse or awaken love until it so desires.”

2. When Both the Man and Woman Take Time a Part but they Verbalize a Plan on Reconnecting in the Future, This Could Result in a Future Relationship God Wants to Happen

In addition to mutually recognizing the need to mature in the Lord individually as we discussed in point 1, another important factor that would increase the likelihood of a relationship occurring in the future is when a man and woman verbalize a plan with each other to reconnect with one another at some point.

The most common example of this scenario would be when a boyfriend and girlfriend agree to go on a “break.” This is often viewed differently than a full-blown breakup. Rather than saying to each other, “This relationship will never work so lets breakup for good,” a “break” often occurs when there is a lot tension in the relationship and both people realize they need some time a part to get the clarity they desire to have.

Sometimes a break turns into a breakup and the couple just goes their separate ways. But sometimes the couple do what they said and after a defined period of time, they come together again to see if anything has changed in their relationship.

While I think this can be helpful in some dating relationships, I would caution people against going on indefinite breaks where two people go their separate ways while not really knowing if they will ever speak again. In those instances, a clean breakup would be better so your heart can truly move on.

Another caution would be to not verbalize getting back together in the future with someone you did not have a serious relationship with. In instances like this, the danger would be that one person is waiting for a relationship to happen one day while the other person is just out their living their life without giving the relationship a second thought.

So this scenario of verbally expressing a plan to separate for a period of time to then get back together later in life should only be used when the relationship is serious and you clearly define how long the break will actually be. If things are ambiguous it’s best to make a clear decision to be together or to fully split up so you can move forward in life one way or the other. This can be confusing so ask the Lord for guidance as James 1:5 states, “If any of you lacks wisdom, let him ask God, who gives generously to all without reproach, and it will be given him.”

I want to be cautious here because I don’t believe relationships are simple and predictable like math equations. Math is always the same. You put certain variables together and you will always get the same results. Relationships are not designed that way. With relationships, I think it is much wiser to emphasize general principles rather than absolute rules.

With that said, it is helpful to understand the basic principle in life that to get different results you have to do something differently. Throughout the Bible we see that in many ways we reap what we sow as Galatians 6:7 and Proverbs 2:8 explain.

The reason I believe most relationships that don’t work will still not work in the future if tried again is because usually not that much changes in two people that would cause a different result to occur in the relationship.

But sometimes major changes do happen. It’s not common and I don’t believe you should waste your life waiting years and years for something major to change so the relationship works out, but if something major does change then I think a relationship that did not work could possibly work now that things are different.

For example, perhaps you were involved in a long-distance relationship that was just too hard so it didn’t work out. But then something major changes at work and suddenly you move to the same city as this person. Perhaps now you begin to date and your relationship can develop more traditionally and then it works out between you two because you have time to grow more naturally together. But on the other hand, to break up because the distance was too hard and to then try to date again one day even though you are still long-distance would not be wise.

In summary, if nothing has really changed between two people, it’s best not to try to make this relationship work when it did not work in the past.