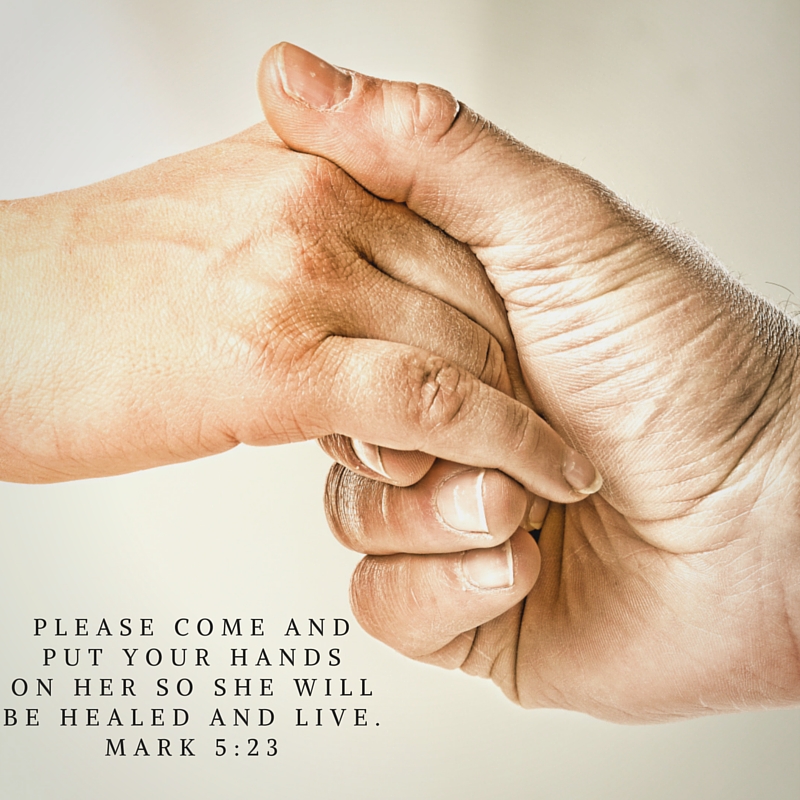 “Go home to your friends and tell them how much the Lord has done for you, and how he has had mercy on you.” And he went away and began to proclaim in the Decapolis how much Jesus had done for him, and everyone marveled. – Mark 5:19-20

But the woman, knowing what had happened to her, came in fear and trembling and fell down before him and told him the whole truth. And he said to her, “Daughter, your faith has made you well; go in peace, and be healed of your disease.” – Mark 5:33-34

And immediately the girl got up and began walking (for she was twelve years of age), and they were immediately overcome with amazement. And he strictly charged them that no one should know this, and told them to give her something to eat. – Mark 5:42-43

The demon possessed man use to live alone among the tombs, but once he was healed he then was sent by Jesus to proclaim Christ in the city. He used to live among dead bodies because he was filled with dead spirits, but now he was proclaiming Jesus among the living because the Spirit of Life had healed him. But what would have happened if the demon possessed man went back to the cemetery because he wasn’t sure if the demons would come back?

The woman with a chronic discharge of blood use to have to hide her disease. She had to secretly weave her way through the crowd in fear of the shame that would come if other people knew she touched them. She lived a life of seclusion, secrets, and shame. But when Jesus healed her, she instantly went and told the “whole truth” (Mark 5:33).

Jairus’ daughter was dead, but now she is eating, which is something she could never do while dead. Jesus doesn’t tell her to lie in the bed just to make sure she was fully recovered. He tells her to get up and live the healed life, unafraid that the healing might not be real.

Once we are healed, we must leave our wounded lifestyle behind and live out our new life in Christ.

To be clear, there’s no point to pretend you have something that you really don’t. If you haven’t truly been saved, if you haven’t been truly healed, then there is no point to pretend you have. But some of us have been saved, we have been justified, we have been healed, and the problem is that we lack the courage to go and live the healed life, doubting the healing, fearing that we might get hurt again.

And so we come into Jesus’ presence, get filled with his Spirit, but then go back to live alone in the grave yard, we go off in shame, quietly weaving our way through the crowds, afraid to touch anyone because we might make them unclean, or we just lay there in bed acting like we are still about to die.

After you are healed, you can negate your healing by not walking in it. When you act wounded when God has restored you, you rob yourself of the restoration God purchased for you on the cross. A fear of the past destroys your present and your future. But when you are in the presence of Jesus, the past has no power of you.

If you want to never return to the darkness, you must painfully seek to remain in the light. Each of the three people healed in Mark 5 immediately got up and did what they couldn’t have done if they weren’t really healed.

Some of us once were healed . . . but we still don’t trust it, so we keep acting like we’re wounded. We keep living under the lie that there is still something wrong with us. But once Jesus heals you, you have to “immediately” (Mark 5:42) “go” (Mark 5:19, 34) and live free, choosing to experience that healing and never turn back to your old life. To act as though you haven’t been healed is to wound yourself again.

When Jesus rescued the women in John 8 he told her to go and sin no more, Jesus told the crippled man in John 5 to pick up his mat and walk, and Jesus told Peter in John 21 once he reinstated him after Peter’s betrayal to go and feed his sheep. When Jesus heals you he expects you to leave your wounds behind, leave your old life in the past, and go and live a new healed life.

So many times the problem isn’t that Jesus didn’t give us the healing, it’s that we don’t have the courage to live in it and to walk differently than we used to when we were burdened with the disease and sin Jesus has set us free from:

“Not that I have already obtained this or am already perfect, but I press on to make it my own, because Christ Jesus has made me his own. Brothers, I do not consider that I have made it my own. But one thing I do: forgetting what lies behind and straining forward to what lies ahead, I press on toward the goal for the prize of the upward call of God in Christ Jesus. Let those of us who are mature think this way . . . . let us hold true to what we have attained.” (Philippians 3:12-16)

So in conclusion, if you want healing, you have to ask Jesus personally (Part 1), you have to stop asking other sources (Part 2), and once you’ve truly been healed, you must take up your mat and start walking, living the healed life, no longer afraid of the wounds from the past (Part 3)

For when you are in the presence of Jesus, the past has no power of you.

(Note: This is a 3 part series on how to be spiritually healed by Jesus Christ. In Mark 5 Jesus heals a demon possessed man, Jairus’ daughter, and women with a chronic discharge of blood. While all of Jesus’ miracles glorify God, their main purpose is to act like visual aids to his sermons about the gospel. His miracles showed physically what he was trying to teach people spiritually. Mark 1:37-38 explains, “Everyone is looking for you.” 38 And [Jesus] said to them, “Let us go on to the next towns, that I may preach there also, for that is why I came out.” So as we study Mark 5, we’re not going to be focusing on how to receive a physical healing. What we’re talking about is how to receive a Christian spiritual healing, a healing to the heart, from Jesus.)