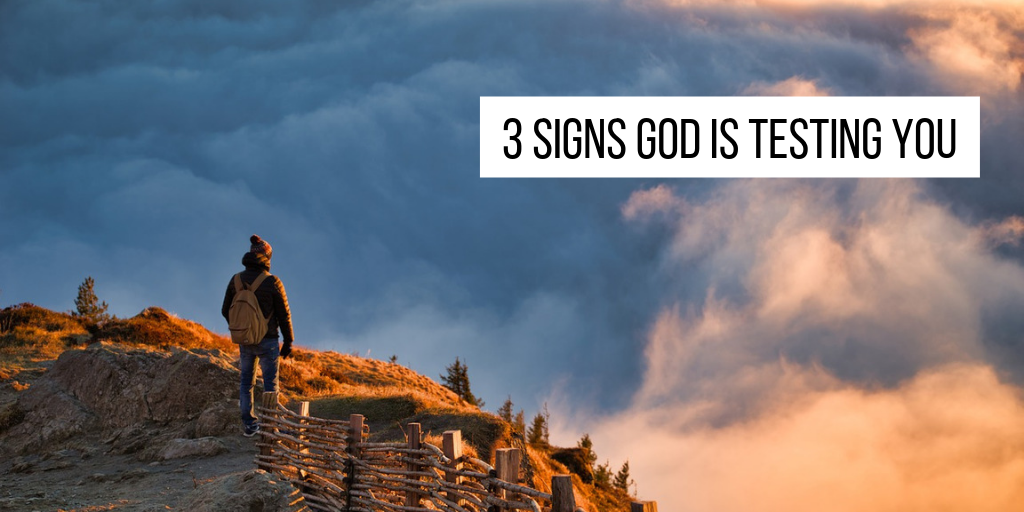 Before we can talk about “God testing you,” we first have to clarify the differences between a test and a temptation. While the Bible is clear that God can initiate a test in your life, it is also clear that God will never tempt you with sin.

A test is when difficult things happen in life that make you choose if you will follow God or turn from God. A temptation, however, is when you are enticed to sin. God will never entice you to sin. According to 1 Corinthians 10:13, God allows temptations, “God is faithful, and he will not let you be tempted beyond your ability, but with the temptation he will also provide the way of escape, that you may be able to endure it.” Even though God allows temptation, James 1:13-15 teaches us that God never causes temptations. It says:

Let no one say when he is tempted, ‘I am being tempted by God,’ for God cannot be tempted with evil, and he himself tempts no one. But each person is tempted when he is lured and enticed by his own desire. Then desire when it has conceived gives birth to sin, and sin when it is fully grown brings forth death.”

So as we discuss these different points about tests in our life, we must make sure we are not confusing the meanings of a “test” compared to a “temptation.”

1. God May Be Testing You If a Trial in Life Is Causing You to Rejoice Because of the Faith God Has Granted You

Before God called me to fully invest in AGW Ministries, I was one of the pastors at a local church here in Cleveland Ohio. As a pastor you get to sit with people in their darkest hours. When someone would get cancer, lose a loved one, or go through some financial trial, there were two very different responses people would have.

One group of people would ask in bitter confusion, “Why would God allow this?” I’m not shaming these people. God knows we’ve all asked that question at some point in life. However, another group of people would have a very different response. Instead of being offended and hurt that God allowed this to happen, instead they would say something like, “I’m just so grateful God is with us. I don’t know how we would get through this without him. God’s is good. God’s got this.”

Oftentimes God will actually use a trial in our lives to increase our joy. 1 Peter 1:6-7 says this:

In this you rejoice, though now for a little while, if necessary, you have been grieved by various trials, so that the tested genuineness of your faith—more precious than gold that perishes though it is tested by fire—may be found to result in praise and glory and honor at the revelation of Jesus Christ.”

When you have a solid and mature faith in Jesus Christ, the trials of life only heighten your hope in him. When you know that life does not hold the promises of joy your heart needs and that those longings are actually only fulfilled in Christ, the tests in life only deepen your appreciation for your Savior.

So if a difficult season in life is actually causing you to have a greater appreciation for how much God loves you and supports you no matter what is happening on this broken planet, this is a sign God is allowing this test for your good and his glory.

2. God Is Testing You If a Trial Is Making You Aware of Your Need for More Faith in Him

While a test from God can certainly make us increase our joy in him, sometimes this process of increasing our joy needs to start by exposing our deficiencies.

God tests us so we can get a clearer understanding of our own level of faith. Through a test God opens our eyes to areas of our lives that God wants us to improve upon with him. Throughout the Bible God asks people questions, but he never asks them a question for his own benefit because he is all knowing, for as Psalm 139:4 states, “Before a word is on my tongue you, Lord, know it completely.”

For example, when Adam and Eve sinned against God and they were hiding in the garden, God asked them, “Where are you?” (Genesis 3:9). God knew where Adam was. But God wanted Adam to realize where he was. By asking Adam a question, it forced Adam to assess himself and thus become aware of his own current condition.

Likewise, God often puts tests in our lives not to cause us to fall or to lose faith but rather to make us aware of how far we have already drifted from him. Tests often do not make us lose faith or gain faith; rather, they simply reveal the level of where our faith currently is already. Without the test, however, we often have an inaccurate view of our own level of maturity and faith. Before Jesus multiplied the fish and bread to feed the five thousand, in John 6:5-7 it states:

Lifting up his eyes, then, and seeing that a large crowd was coming toward him, Jesus said to Philip, ‘Where are we to buy bread, so that these people may eat?’ He said this to test him, for he himself knew what he would do. Philip answered him, ‘Two hundred denarii worth of bread would not be enough for each of them to get a little.’”

Jesus asked Philip a question so Philip could become aware of his own lack of understanding about God’s power to provide. Jesus didn’t do this to shame Philip or play mind-games with him. He wanted Philip to grow from this so in the future he would have a different response next time he faced a trial only the power of God could overcome. Philip now had an opportunity to see how much he was relying on his own strength so he could work on this lack of faith and do better in the future.

Just as a test in school is not meant to teach you something but rather gauge how well you have learned the content, so too does God use tests to make us aware of what we need to work on with him. So if a trial is exposing an area in your life where you need to mature and have more faith, this is a sign God is testing you to help you become aware of the areas he wants to work on with you.

3. If a Difficult Trial Is Giving You an Opportunity to Reap the Rewards of Trusting God, This Is a Sign God Is Testing You

Even when hard things happen to us in life, we have to remember how much God truly loves us. But this begs the question, “If God loves us so much, why does he let hard things happen to us?” That is a monumental question with different levels of answers, but one answer is that God’s love does not cause him to always do what is easiest for us but rather what is best for us. Because our time on earth is limited and we have an eternity ahead of us, God often gives us opportunities in this lifetime to reap eternal rewards in heaven that in the long-run will be far better for us than the temporal comforts this world provides.

A test on earth is an opportunity to reap a reward in heaven. This is the main point we can learn from the test that God put Abraham through when he asked him to sacrifice Isaac. When God stopped Abraham in Genesis 22:12 he said, “Do not lay your hand on the boy or do anything to him, for now I know that you fear God, seeing you have not withheld your son, your only son, from me.”

Here we can see the other side of God’s omniscience. The Bible clearly teaches that God knows everything, but God still gives humans the free will to actually live their lives rather than mindlessly follow a precoding like a robot. When God tested Abraham, he was giving Abraham an opportunity to trust God and reap the rewards. For as it says in

When you read through sections of the New Testament, you learn that Abraham’s faith in God during the tests of life are meant to be an example for us all. Without tests, we do not have the opportunities to trust God, and without an opportunity to trust God you can’t reap the rewards that come through faith. And by rewards I don’t mean that we are earning good things through our works, but it is clear that God sends his blessings (most importantly the blessing of salvation) through the means of faith. Without tests we would never get a chance to express true faith:

By faith Abraham, when he was tested, offered up Isaac, and he who had received the promises was in the act of offering up his only son, of whom it was said, “Through Isaac shall your offspring be named.” He considered that God was able even to raise him from the dead, from which, figuratively speaking, he did receive him back.” (Hebrews 11:17-19)

“Yet he did not waver through unbelief regarding the promise of God, but was strengthened in his faith and gave glory to God, being fully persuaded that God had power to do what he had promised. This is why ‘it was credited to him as righteousness.’ The words ‘it was credited to him’ were written not for him alone, but also for us, to whom God will credit righteousness—for us who believe in him who raised Jesus our Lord from the dead.” (Romans 4:20-24)

“Blessed is the man who remains steadfast under trial, for when he has stood the test he will receive the crown of life, which God has promised to those who love him.” (James 1:12)

So if you are going through a test in life, this is an opportunity from God to express trust in him.