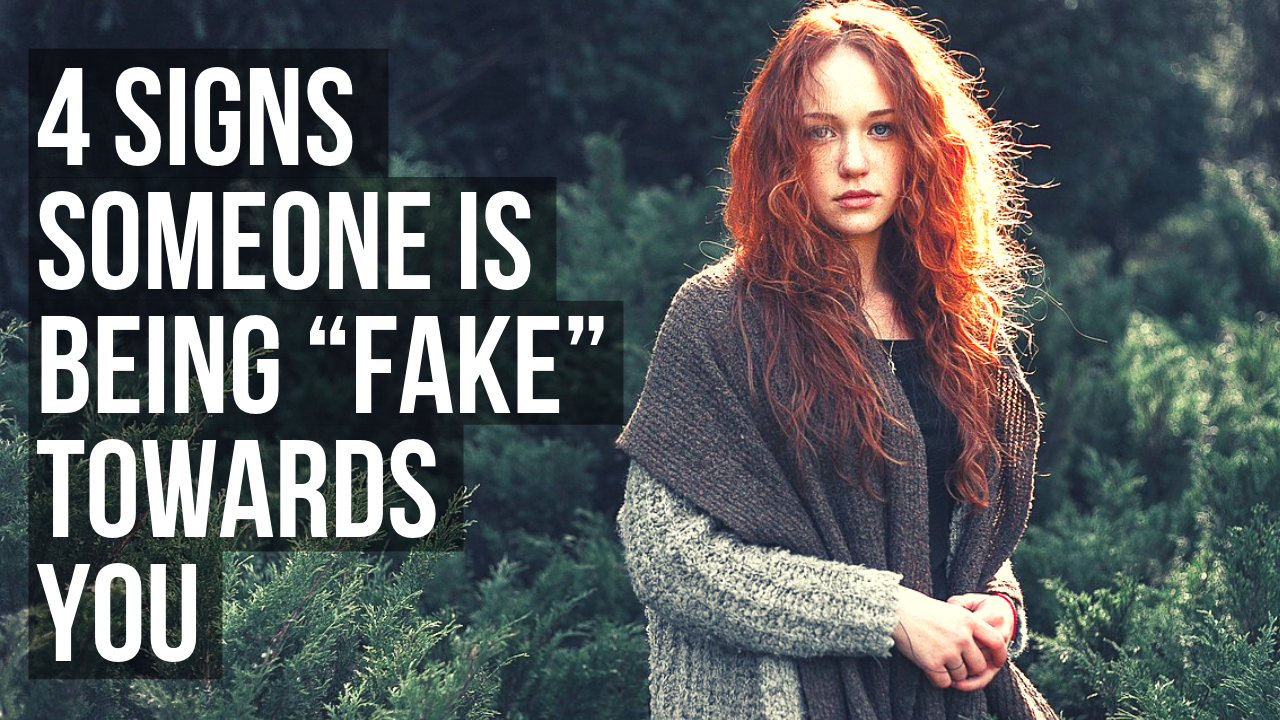 When someone is being “fake” towards you, it means they are acting one way but in reality they have different intentions than what they are portraying. As Christians we must be careful because the Bible says we are not supposed to judge other people’s motives.

However, the Bible also says to use discernment and to avoid being deceived by others (Romans 16:17-18). So the key is to not judge someone’s heart because only God can do that but you should judge people’s external actions and how they treat you.

So here are 4 signs someone is being “fake” towards you.

And on a quick side note, today is the last day to get the eBook version of my newest book at its reduced price. It’s called 100 Relationship Signs: How to Know What God Is Saying to You in Singleness and Dating. For more information, you can click here.

1. Ridiculous Flattery Is a Sign of Someone Being “Fake” Towards You

One of the most common pieces of evidence for someone being fake towards you is over the top flattery. There’s certainly nothing wrong with admiring someone, sharing compliments, or being encouraging. But there’s a big difference when someone is intentionally trying to flatter you.

Flattery is defined as “lavish insincere praise and compliments given to someone, especially to further one’s own interests.” When someone compliments you with phrases that begin with “the greatest,” “the best,” or “the most” this should be seen as a red flag.

Psalm 5:9 states, “For there is no truth in their mouth; their inmost self is destruction; their throat is an open grave; they flatter with their tongue.” It’s great if someone really values something about you, but to think we are better than everyone else is setting ourselves up to be deceived by fake people.

2. When Someone is Trying to Keep You in Only One Part of Their “World,” This Is a Sign They Are Being Fake

When someone is not being genuine with you, they will usually try to contain their lies by keeping you in only one part of their life and not sharing other parts of their world with you. Perhaps you are talking to someone online and every time you try to set up a face-to-face they make up some lame excuse. Or perhaps you feel like you are really connecting with a guy or woman at work but every time you try to meet them outside of work they keep putting it off.

When someone only flirts and shows interest with you in certain contexts, this is usually a sign they are being fake and hiding something from you.

3. Bragging About Yourself Is a Sign of a Fake Person

When people want you to see them differently than they really are, they will often feel compelled to brag about themselves. One incredible passage of Scripture to see this in is Galatians 6:12-14 (NIV). Paul states:

Those who want to impress people by means of the flesh are trying to compel you to be circumcised. The only reason they do this is to avoid being persecuted for the cross of Christ. Not even those who are circumcised keep the law, yet they want you to be circumcised that they may boast about your circumcision in the flesh. May I never boast except in the cross of our Lord Jesus Christ, through which the world has been crucified to me, and I to the world.”

Paul is warning the Galatians that these false teachers are being fake because they are only trying to compel the Galatians to get circumcised so that they could boast about how they have made more converts. Paul, on the other hand, says that he is not being fake towards them because his desire is not to boast in worldly things but only in the gospel of Jesus Christ.

So when someone is boasting about themselves and what they have done, this is a sign of a fake person. For as Proverbs 27:2 instructs, “Let another praise you, and not your own mouth; a stranger, and not your own lips.”

4. People Who Act Fake Towards You Make Lofty Promises but Have No Follow Through

Finally, perhaps the most efficient way to spot someone who is acting fake towards you is by comparing what they say to what they do. Proverbs 25:14 states, “Like clouds and wind without rain is a man who boasts of a gift he does not give.”

Imagine being a farmer who gets excited to see rain clouds so his crops will grow but then the rain clouds never actually produce any rain. This would be very frustrating as a farmer. Likewise, when you get into a relationship with someone who makes lofty promises but then is not able to follow through on anything they say, you will feel very frustrated as well.

Avoid fake people by holding people accountable for the promises they make to you. Don’t give people chance after chance expecting them to finally follow through when they have consistently failed you in the past. It’s one thing to forgive people of sins when they confess. As Christians we must do that. But we must also guard our hearts (Proverbs 4:23) and accept when someone is being fake towards us because their words don’t match their actions.

For more information on how to navigate the confusion that often pops up in singleness and dating, you may want to check out my newest book called 100 Relationship Signs: How to Know What God Is Saying to You in Singleness and Dating. The ebook version will be at a reduced price for only 1 more day. You can click here to for more information.