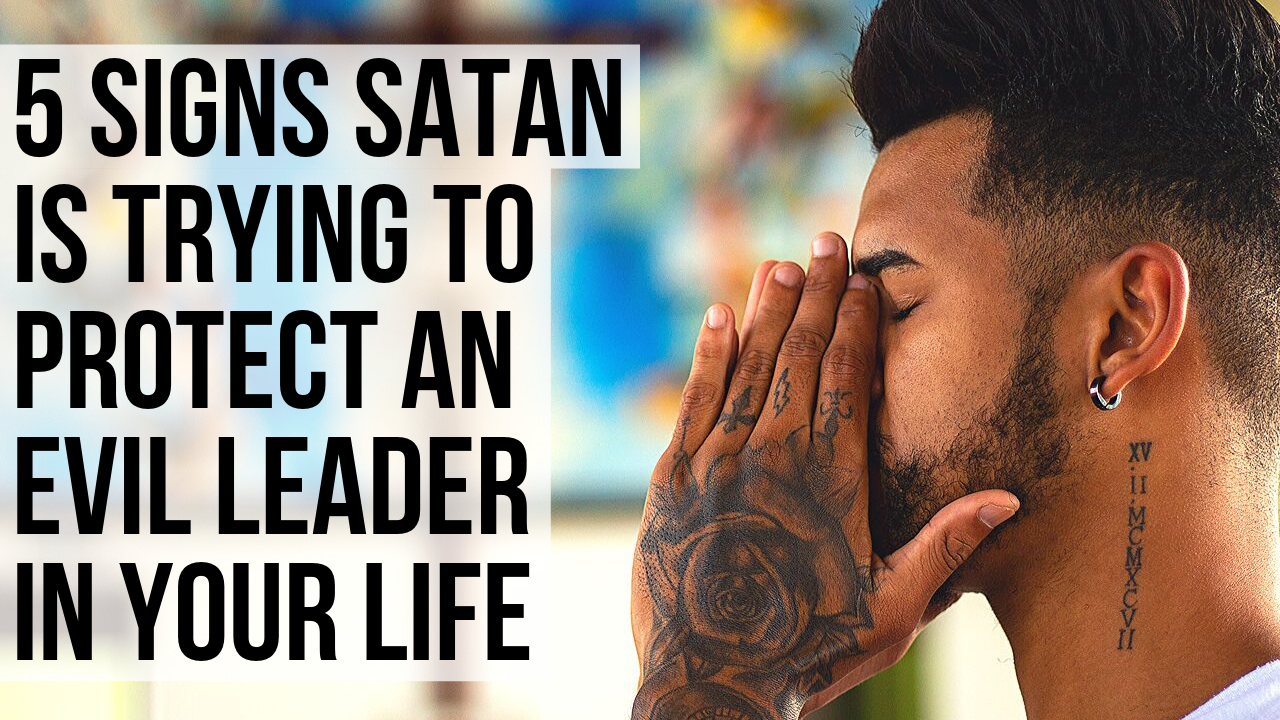 Satan wants nothing more than for people to follow corrupt leaders pretending to be genuine servants of Christ. So here are 5 phrases the devil often uses to keep people following a false “Christian” leader.

Of course this is true. Only Jesus lived a perfect life. But one way humans cope with their own sins rather than confessing and repenting to God is that they start comparing themselves to other people. When we feel like we are better than others, it can lessen the sting of our own failures.

Christians often do the same thing with the leaders they love but that they know are failing. Rather than honestly assess this leader for the failures in his life, Satan will tempt people to look outside into the world and say something like, “See, everyone is doing this. He’s not that bad.”

God has given us standards for Christian leaders for a reason. If someone does not honestly meet the requirements of passages like 1 Timothy 3:1-13 and Titus 1:5-9, then do not follow this person because they are not fit to lead according to the guidelines God himself has given us in his word.

2. “He Just Talks Like That to Us Because He Cares So Much”

This is unacceptable. There’s never a reason to speak sinfully to other people. Period. You can’t claim to verbally assault someone because you love them so much.

Excuses like these are lies put in the minds of beaten down followers by aggressive and controlling leaders. Satan loves abuse and he will try to warp the minds of people to start thinking abuse is a form of love.

These false leaders know they have to justify their unacceptable behavior so they shed tears in private meetings to “show how much they care.” They do everything they can to be perceived as a caring leader who is just so consumed with their work that they often lose focus and say hurtful things.

But James 3 is all about taming the tongue, and the opening verse starts with, “Not many of you should become teachers, my fellow believers, because you know that we who teach will be judged more strictly” (James 3:1).

It’s never okay to verbally abuse people no matter who you are. Period.

3. “I’m Sure the Board Is Keeping an Eye on His Financial Decisions”

Satan gains control over people who entered ministry with good intentions by playing on their love for money. It’s very consistent across the spectrum that bad leaders love money, which is why 1 Timothy 3:3 says an elder must not be a lover of money. Bad leaders want total control of the resources and they don’t want people knowing what they do with it.

So what they do is they tell everyone that other people are keeping them accountable. They tell the donors that the board is in charge of all the money. But then they tell the main board there is a separate financial board who makes all financial decisions. That separate board is then hand picked and easily manipulated by the evil leader.

There’s always some sort of way bad leaders avoid common sense financial transparency. When people have nothing to hide, they don’t hide anything. Bad leaders hide their financial control of church resources by giving limited power to so many different groups that in the end no one really has any power but the bad leader.

The signs are always there for people who want to see the truth, but when people don’t want to see their leader for the failure he is, they pass the responsibility for accountability onto someone else. Rather than ask the obvious financial questions everyone is thinking, Satan tempts them with phrases like, “Well I’m sure the board is keeping an eye on his financial decisions.”

The things is, if the board was actually keeping him accountable you wouldn’t even have those doubts you have about the size of his house, the cost of his car, the disappearing money, the extra vacations on the church credit card, or the reasons he needs those designers clothes even though everyone else in the church just shops at normal stores.

4. “So Many Outside People Are Against Him Because Satan Is Afraid of His Impact”

Satan does his best to help people explain away Bible verses about good leaders like 1 Timothy 3:7, “He must also have a good reputation with outsiders, so that he will not fall into disgrace and into the devil’s trap.”

It’s quite a brilliant trick when you think about it. One way the enemy stays hidden is by tempting people to look for him in the wrong places. To keep his false teachers safe, Satan gets deceived people to blame the good guys. Satan tempts the naïve to believe that those people who are exposing the false teacher are actually following Satan themselves. This is exactly what the false teachers said of Jesus in Matthew 9:34, “But the Pharisees said, ‘He casts out demons by the prince of demons.’” To keep his false teachers safe, Satan tempts the people to outcast those who are willing to expose the lies of these bad leader.

A reputation should speak for itself. So if you find yourself needing to explain away this leader’s bad reputation, this is a red flag.

5. “I Can’t Say Anything Because It Would Hurt the Church Too Much”

This last phrase is deeply frustrating to me because it is so backwards and cowardice. It makes no sense to me when people try to cover up the sins of bad leaders because they are afraid of what other people will think of the church. Would you rather your church be built on a lie or to be so committed to truth the church is willing to rebuke anyone, including its own leaders?

What’s far more damaging is when the sins of leaders are covered up for years, thus allowing this bad leader to continue hurting people even when they should have been rebuked already. Satan maximizes the damage of false leaders by making people feel too ashamed to expose the corruption in the Christian community.

Sadly, Satan builds up his false teachers on the backs of weak congregants. Behind every aggressive leader is a passive group of followers too afraid to expose their own leader’s sins. It’s literally a match made in hell. Satan always seeks to pair a strong-willed leader with weak-willed supporters.

The simple truth is that we should always do the right thing regardless of the consequences. There’s no price too great that should not be paid for the truth. God loves truth. God is truth (John 14:6).