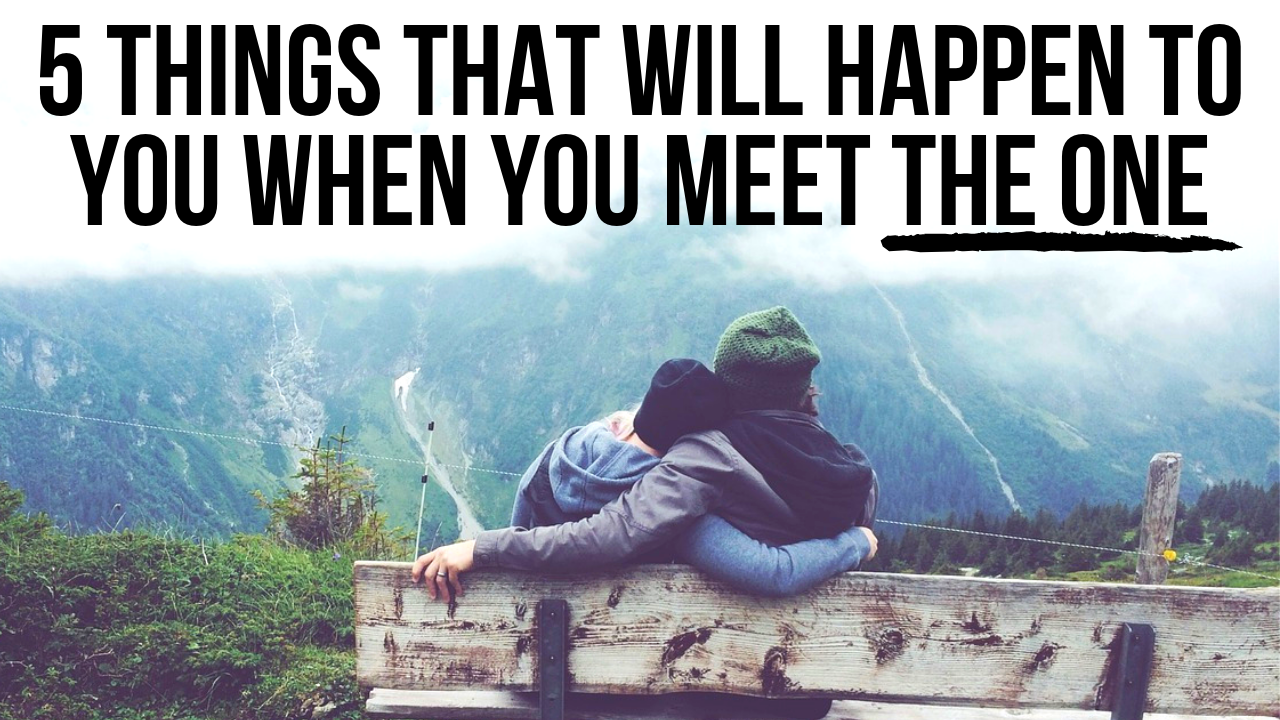 Here are 5 things that will happen in your life when you meet the one God has for you.

And since this is such a big topic, if you have more questions about meeting your future spouse, you might want to check out my book called The One: How to Know and Trust God’s Sovereign Plan for Your Future Marriage.

1. Your Connection with this Person Will Grow Stronger and Stronger Rather than Weaker and Weaker

Infatuation starts strong and grows weaker over time. When you meet the person God wants you to marry, you will have the type of relationship that will become deeper as time goes on.

It really doesn’t matter how your relationship starts. Some people have instant and strong chemistry with the person they end up marrying. Other people had no attraction at first but through friendship they started to have stronger and stronger feelings for each other. And some couples even disliked each other at first only to later give each other a chance which then led to a thriving relationship.

What is consistent, however, with all healthy Christian dating couples that end up getting married is that their connection with each other grows stronger through their season of dating rather than weaker. If your feelings for someone start strong but actually dwindle the more you get to know them, this is not the person God has for you.

And just to clarify, I don’t mean you will have greater and greater butterflies in your stomach or puppy love. I mean that as time goes on, your relationship with this person will move past that season of infatuation and move into a deep, secure love that is rooted in joyful commitment and truth.

2. You Both Will Gladly Change Your Relationships with Other People from the Opposite Sex

I don’t think that a dating couple or a married couple needs to totally reject all their friends from the opposite sex; however, they must fully recognize how different things must be now that they are committing to someone else.

A married man or woman, for example, should not be spending one-on-one time with a friend from the opposite sex on a consistent basis or in ways that raise suspicion. For as Ephesians 5:3 states, “But among you there must not be even a hint of sexual immorality.”

If someone is not willing to change their relationships with the opposite sex when you are dating them, this means they are probably not the person God wants you to marry.

3. God Will Not Spare You of Problems, But He Will Empower You Through All the Trials You Will Face Together

When God brings the person he wants you to marry into your life, this will not mean that your relationship will be perfect. Just because you go through storms together does not mean Jesus is not with you. For as Mark 4:37-38 tells us about the disciples who were caught in a storm, “And a great windstorm arose, and the waves were breaking into the boat, so that the boat was already filling. But [Jesus] was in the stern, asleep on the cushion.”

God’s presence in your relationship will not equate to calm waters. However, if God really does want you two to get married, he will empower you both to make it through the trials you face when you call upon Jesus for help. For as Mark 4:39-40 explains, “And he awoke and rebuked the wind and said to the sea, ‘Peace! Be still!’ And the wind ceased, and there was a great calm. He said to them, ‘Why are you so afraid? Have you still no faith?’”

So don’t be afraid if you go through rough waters together. If God wants you both to make it to the other side together, he will empower you to make it.

4. When You Meet The One God Has for You, God Will Bring You Both Into Agreement on Important Life Decisions

Most Christians know the importance of being equally yoked spiritually (2 Corinthians 6:14). However, two people can both be strong Christians who are glorifying God and yet still not be meant for each other.

When you meet the one God wants you to marry, practical decisions in life will also coincide to some degree. Yes, every couple needs to compromise. But if you want completely different things in life and neither of you are willing to budge, this probably means you are not meant to be.

5. God Will Remove All Doubts About Marrying This Person When You Meet The One

Doubts about how your future might look will still be present when you meet the one God wants you to marry. You certainly will not know what the future really holds in your marriage together. But if you still have doubts about whether or not you should marry this person, God has not yet fully given you the green light yet.

You can date someone you have doubts about because that is one of the goals of dating, to figure out what you don’t know about this person. But you should never marry someone when you are unsure if God actually wants you two to get married.

When God brings the right person into your life, you will know God wants you to marry him or her. If you are unsure, don’t do it. For as Romans 14:23 states, “But whoever has doubts is condemned if he eats, because the eating is not from faith. For whatever does not proceed from faith is sin.”

When you meet the one God has for you, you will know you are not just forcing this relationship to happen because you want it so bad. You will be confident that God is truly the one behind this union.

For more information on how to know who God wants you to marry, check out my book, The One: How to Know and Trust God’s Sovereign Plan for Your Future Marriage.