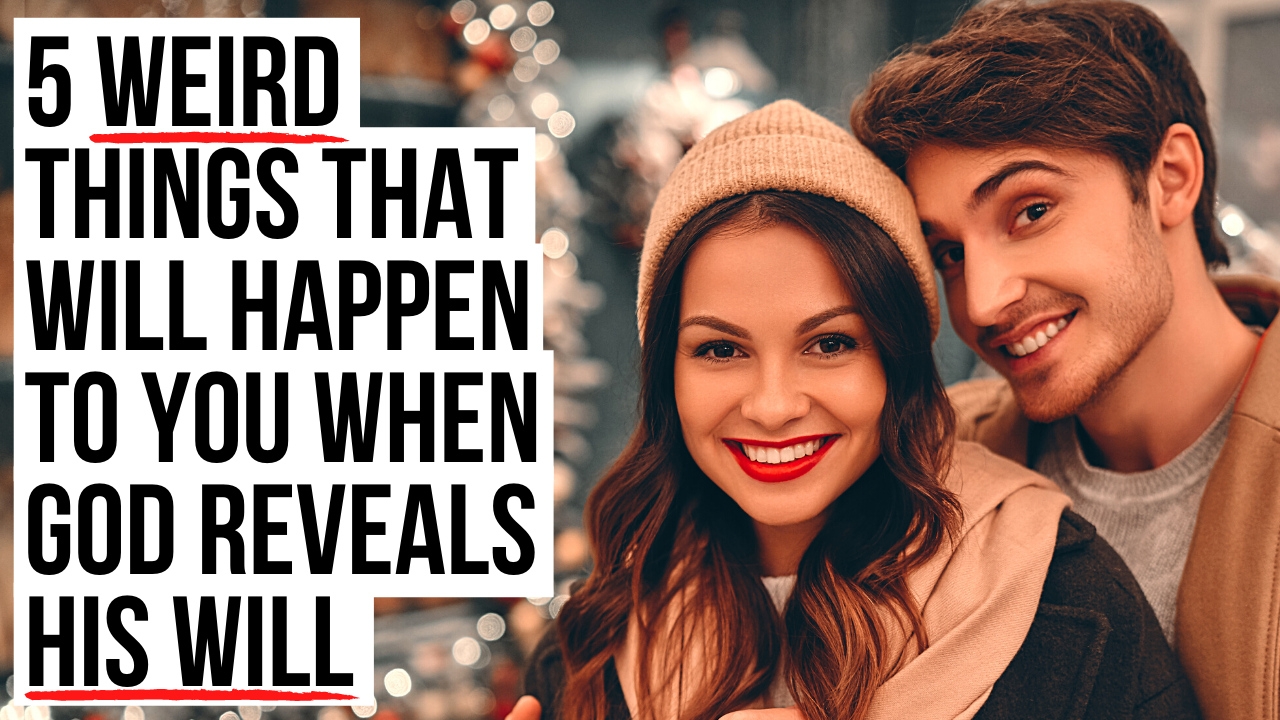 There are at least 3 very common ways that God most often reveals his will to us – through his word, through prayer, and through the circumstances of our lives. I strongly encourage all Christians to primarily focus on these three ways of knowing God’s will for you. I’ve talked about these three primary ways at many other points. (Click here for videos about knowing God’s will for your life.)

So in this article I wanted to talk about some different ways that are a bit more unusual but which God still does use sometimes to reveal his will to you. Again, go to God’s word if you really want to know God’s will, but sometimes God will help bring confirmation in these ways too.

1. Perfectly Timed Words of Wisdom from People Who Don’t Know What You Are Going Through Are Often Used By God to Reveal His Will to You

God often uses other people to help us identify what he wants us to do. What makes these experiences especially strange, however, is when someone says something that perfectly applies to what we are going through but they have no knowledge about this question or issue we are dealing with.

Perhaps someone shares a story from their past dating experiences that helps you now know what to do with a certain person you had been asking the Lord about. Perhaps someone randomly gives you a book about the exact topic you have been praying about. Or perhaps during Bible study someone shares some wisdom that perfectly applies to what you had just asked the Lord about in prayer the night before. The point is, though it can feel strange when it happens, God often does help us know his will through well-timed words of wisdom given through other people.

As Proverbs 15:22-23 states, “Without counsel plans fail, but with many advisers they succeed. To make an apt answer is a joy to a man, and a word in season, how good it is!”

2. Repeated Confirmation of the Same Message Is Often Used By God to Reveal His Will to You

Sometimes we are too quick to use the word “confirmation.” It’s possible to have a desire but then look for confirmation everywhere until you finally convince yourself that God is telling you what you want to hear.

One way to avoid deceiving yourself when it comes to looking for confirmation from the Lord is to look for multiple forms of confirmation. Sometimes, to drive home the point, God will align the sermon, the songs on the radio, your devotional readings, the podcast, and your friend’s words so that it seems you keep getting the same counsel no matter where you turn.

A great biblical example of this can be found in the book of Jonah. Strange things happened to Jonah, but they all were pointing Jonah in the same direction. God wanted Jonah to go to Nineveh. No matter where Jonah ran, God’s message to Jonah was the same.

When you keep getting the same message through multiple different means, this is a good sign God is really speaking to you.

3. Epic Desires That Lead You to Specific Callings Are Often Used By God to Help Reveal His Will to You

The way I’m using these terms is that an epic desire is something big and general and not totally defined but it is a strong passion in you nonetheless. But a specific calling is when God calls you to do a particular task for a particular season and it is very defined.

Our purpose as Christians is always the same – to love and glorify God. But our particular callings can often change throughout the course of our lives. God will often give you a general desire early in life but then it will be years later before he gives you a specific calling to fulfill that desire.

For example, perhaps you have always had a strong desire to help people. But throughout your life you have never had great clarity on what specific way God is best leading you to do that. But as you mature in the Lord, perhaps God is showing you that you have the gift of teaching and then God opens doors for you to start teaching other people through your church. Or perhaps you always thought you were going to marry person A but that was just an epic desire about marriage. Later on God reveals that he actually is calling you to marry person B, so now this is his specific calling.

One biblical example of this can be seen in the lives of the twelve disciples. They knew Jesus was the Messiah and they knew they wanted to follow him. But over the years Jesus refined their understanding of what it meant to be his follower. Their general desire to follow Jesus as the Messiah had to be refined so they could specifically follow Jesus in the way that he wanted them to. An example of this can be found in Mark 10:35-45.

The point is, it can be kind of weird when it feels like God is changing the plan. But in reality God is not changing the plan; he is oftentimes just refining an epic desire into a specific calling.

4. Failed Attempts That Lead You to Open Doors You Never Would Have Walked Through Is Often a Way God Will Lead You Into His Will for You

God’s sovereignty is so perfect that he even leads us down paths that look like failures to us but in reality, God just used these events to get us to the place he wanted us to be. Isaiah 55:8-9 says:

For example, perhaps you felt led to date someone but then you two break up. But through this relationship, you also gained a new group of friends, and in that new group of friends, you became friends with a particular person that you now are connecting with even more. Perhaps you then start dating this person and eventually get married. It’s possible God purposely led you to date person A so that you would meet person B.

Or perhaps you quit your job and go to a new company. But you quickly fear you make a big mistake because you really don’t like your new position. But while you are there you then meet a coworker who is seeking a business partner. You two hit it off and start a business that is really successful. As you can see, the examples are endless.

The point is, what you thought was a failed attempt could actually be God’s way of getting you to where he wants you to be.

5. A Strong Awareness of What You Don’t Want Will Often Be Used to Lead You Towards What God Does Want for You

Some people know exactly what God wants them to do and then they freely pursue that, sensing the whole time this is really God’s will for them. For most of us, however, that does not happen. What is far more common is that we simply know what we don’t want and we have less clarity about what we do want.

A powerful example of this can be seen in Acts 8:1-4. The early church was being persecuted in Jerusalem, but God actually used this to spread his word to new places. It states:

And there arose on that day a great persecution against the church in Jerusalem, and they were all scattered throughout the regions of Judea and Samaria, except the apostles. . . . Now those who were scattered went about preaching the word.”