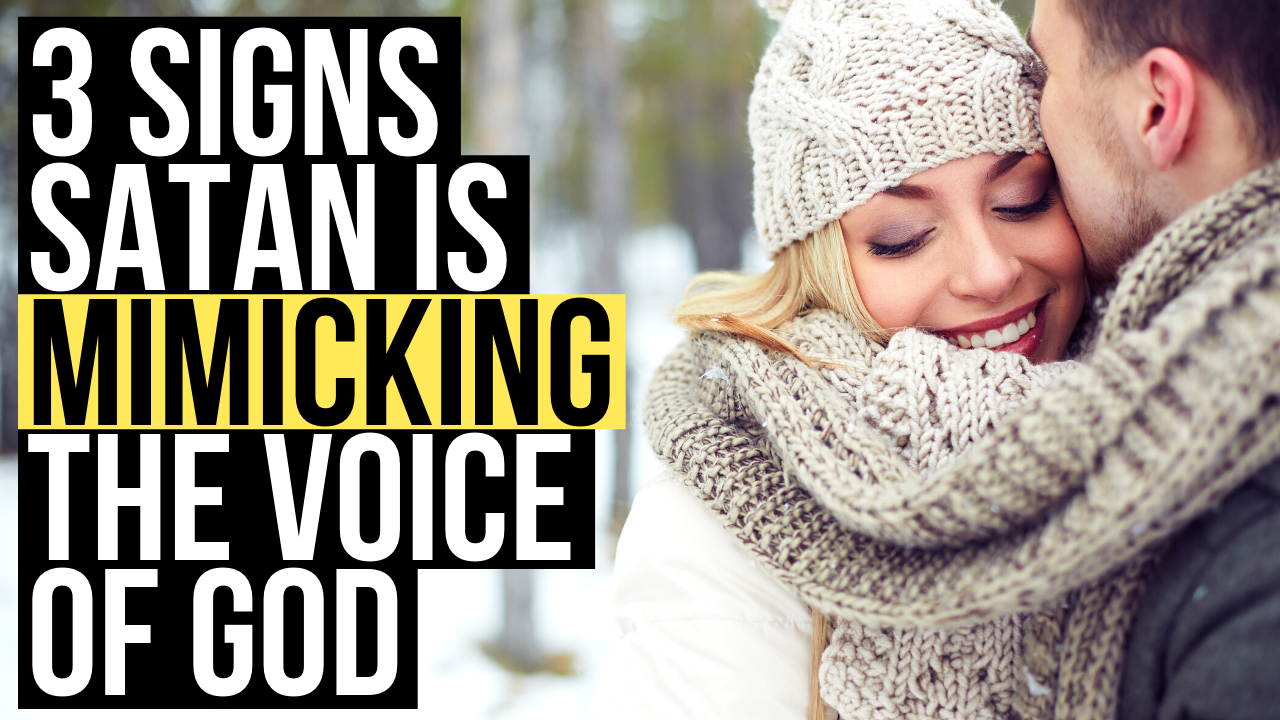 Here are 3 common ways Satan will try to mimic the voice of God to mislead you.

1. If You Are Being Tempted to Twist the Word of God to Make It Seem Like You Are Doing Something Righteous, This Is a Sign Satan Is Trying to Mimic the Voice of God

Satan is evil but he is not stupid. He is too cunning to just tempt all Christians to blatantly disobey the word of God. For some, a blatant temptation is enough. But for others, they need more convincing. One way he does this is by tempting them to justify their sinful desires through twisting the intended meaning of Scripture into what they want to hear.

One example of this attack that I have witnessed personally very often is when it comes to dating or marrying a non-believer. One passage of Scripture that many use to justify being equally yoked is 1 Corinthians 7:13 which says, “If any woman has a husband who is an unbeliever, and he consents to live with her, she should not divorce him.”

Satan often uses a Scripture like this to try to make people make a jump to what they want it to say, “See, if a believer is married to an unbeliever, this must mean God is okay with you marrying an unbeliever.” But notice that is not what this verse says at all. In context this verse is talking to Christians who are already married to an unbeliever. People often get married when they are unsaved and the one of the spouses gets saved after they have already been married. This was especially common when Paul wrote this letter because Christianity was just spreading, so many times only one person in the marriage would become a Christian. For more on this passage, you can watch, “Does 1 Corinthians 7:12-16 mean you can marry a non-Christian?”

My point is, it’s common for Satan to mimic the voice of God by tempting you twist the word of God. This was actually the same attack the devil tried to use against Jesus in Luke 4:9-13. In Luke 4:1-8, Satan tried to tempt Jesus twice, but both times Jesus refuted him by quoting Scripture. So the third time, Satan tried to twist Scripture to tempt Jesus. It says:

And he took him to Jerusalem and set him on the pinnacle of the temple and said to him, “If you are the Son of God, throw yourself down from here, for it is written, “‘He will command his angels concerning you, to guard you,’ and “‘On their hands they will bear you up, lest you strike your foot against a stone.’”

And Jesus answered him, “It is said, ‘You shall not put the Lord your God to the test.’” And when the devil had ended every temptation, he departed from him until an opportune time.”

Jesus gives us a valuable lesson here on how to interpret and apply Scripture. The Bible will never contradict itself. God will never lead you to obey one command but in the process break another. Going back to 1 Corinthians 7:13 and trying to use that as a reason to marry a non-believer, we know that is twisting what God intended because in 2 Corinthians 6:14 and 1 Corinthians 7:39 we are clearly told not be marry a non-believer.

So if Satan is trying to get you to justify a sinful desire by tempting you to twist the word of God, don’t listen. He is just trying to mimic the voice of God.

2. If You Are Being Tempted to Do a Bad Thing with “a Good Motive,” This Is Often a Sign Satan Is Trying to Mimic the Voice of God to You

When the Holy Spirit enters into a Christian, one of the signs of his presence is a loving conviction that lets us know when we’ve done something wrong or when we are about to do something wrong. One way Satan tries to circumvent the loving conviction of the Holy Spirit in our hearts is to tempt us to also focus on our hearts but in a way that twists our motives to make us feel it is okay to do something bad.

While good motives are extremely important to God, a good motive is still not a license to disobey his clear commands. One example of this attack is found in Acts 5:1-11. Here a married couple named Ananias and Sapphira owned a piece of land. They sold that land and gave a portion of the proceeds to the church, which was a good thing. But they also lied and said they gave all the proceeds from the sale to the church when in fact they did keep some for themselves. God was not displeased with them because they kept some for themselves. He was displeased because they lied about how much they were giving. In Acts 5:3-4, Peter said:

Ananias, why has Satan filled your heart to lie to the Holy Spirit and to keep back for yourself part of the proceeds of the land? While it remained unsold, did it not remain your own? And after it was sold, was it not at your disposal? Why is it that you have contrived this deed in your heart? You have not lied to man but to God.”

This couple was tempted by Satan to lie and make themselves look better than they were even though they were still doing a good thing. Don’t let Satan trick you by mimicking the voice of God. God will never lead you into sin even if you think you can do it with a good motive. God’s true voice will always call us to have good motives and good deeds.

3. Satan Often Mimics the Voice of God By Tempting You to Ignore Your Own Sin Because Someone Else Sinned Against You in a Greater Way

Satan often tries to use other people to wound us so deeply that we turn from God. But there are incredibly crafty layers to spiritual warfare. One attack that often has devastating effects occurs when someone does something extremely hurtful against us but then we allow this overt sin to tempt us away from recognizing our own sins.

For example, let’s say a couple has a dysfunctional marriage. Both the husband and the wife are saying equally hurtful things to each other. Neither of them is showing Christ’s love to each other. And things are just a mess in both of their hearts. But then let’s say that the husband takes things a step further and cheats on his wife. She finds out, she is obviously devastated, and then they divorce because he is unrepentant and wants to leave her.

The act of getting cheated on will have incredibly hurtful affects on this woman. Satan will try to use this wound against her and make her feel all kinds of untrue things. But perhaps one of the most damaging attacks Satan will try to use is to then tempt this woman to never examine her own flaws because her husband did something worse than she did.

Remember, before he cheated, they had a bad marriage that was equally both of their faults. They were both being incredibly cruel and hurtful to each other. While her cruel and sinful actions towards her husband are obviously still not an excuse for his affair, his affair does not then erase the sins she committed before this affair took place.

You see, when we are greatly hurt by someone and they do something extremely evil, Satan will try to use this huge sin to tempt us to always have “a get out of jail free card” which dramatically hinders our growth. For example, if the Holy Spirit whispers to her, “You are living in pride and hatred.” She will be tempted to say in our own heart, “Yes, but he cheated.” If she senses the Holy Spirit saying, “You are disrespectful to men and you are pushing good men away from you because you are judging them before you even know them,” she will be tempted to say, “Yes, but a man cheated on me in the past.”

My point is, Satan will often try to mimic the voice of God by tempting you to overly focus on the sins of others so you completely ignore the areas in your own heart that need work. This keeps you stuck and immature, unable to progress forward into the future blessings God wants to give you once you are mature enough to receive them.

So yes, God will validate that you were greatly wronged. But God will never lead you to stop growing even when someone does something terrible to you. But Satan will tempt you to never again look at your own self because this other person did something so bad. As Romans 12:21 states, “Do not be overcome by evil, but overcome evil with good.”