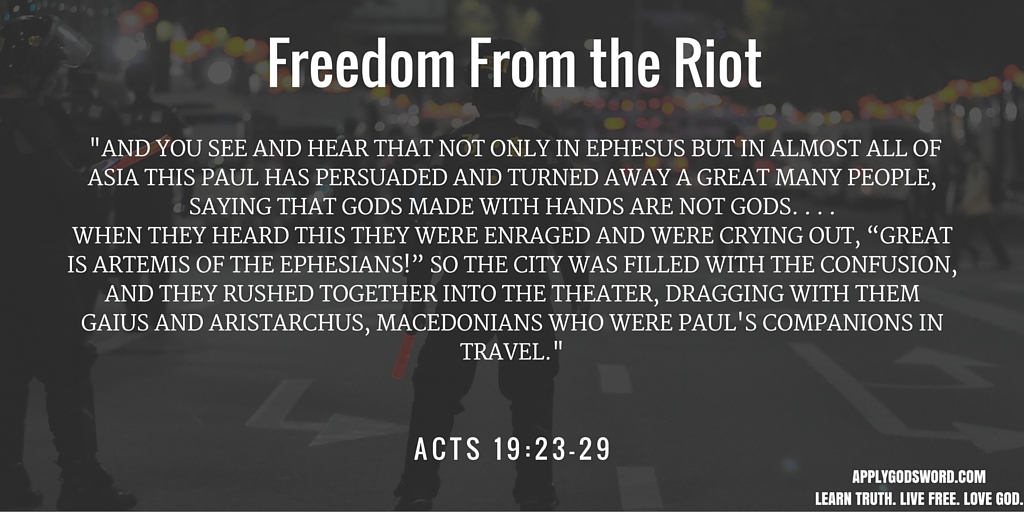 Each of us has those untouchable topics in our life. Whenever they are brought up, whenever we are confronted there, or whenever that certain itch is not scratched, being “enraged” and “crying out” (Acts 19:28) is sure to follow.

We don’t want to yell at our spouse when they confront our eating habits. We don’t want to go into a rage when our kids break a window . . . again. Nobody wants to get into the car after a long day’s work to then fume in fury as we sit helplessly in traffic. Nobody wants to rage and yell, and yet we do far more often than we would like to admit. Why?

When Paul preached the gospel in Ephesus, people started giving up false idols and no longer purchasing the statues of false gods. Those who were not followers of the Way but followers of these false gods were not ready to give up their idols. They feared that if Christianity spread, the temple of their gods, the production of their gods, and resources stemming from the selling of the statues (this money being a god itself to these people) would be taken away from them.

When people are not ready to give up their idols, that’s when riots happen. Just like the Ephesians who were scared of losing their false gods, when we are in danger of losing our idols, we riot the same as them. If someone becomes a threat to our gods or we can’t satisfy the idols of our hearts – our gluttony, our pride, our lust, our worldliness – that’s when the uncontrollable rage comes.

To Stop the Riot, I Must Start Worshiping God

So if you want to regain control of your life and no longer be a slave to your own rioting, you must take an honest look at what god in your life you are desperately still clinging to.

If I’m finding myself yelling at people and acting in ways I don’t want but also can’t stop, it means I am afraid of losing my idol. If the teacher calls about my son’s behavior every week and I end up getting defensive every time, dismissing everything she says and vehemently defending my son, it means he is my idol. If I burn inside every time my co-worker leaves my work station messy, perhaps control is my god. If I freak out my wife every time she talks about the bills piling up, perhaps providing has become my idol.

Whatever it is, if you hope to be free from getting sent into a riot, flinging hurtful words at those you feel are hurting you, then you must let God reclaim the rightful place your false god has taken for far too long.

You Can’t Force People To Give Up Their Idols

Lastly, if you are on the other side and are getting attacked because others think you are trying to take away their idols, after you have done your job in speaking the truth in love (Ephesians 4:15), you are free to do what Paul did, “After the uproar ceased, Paul sent for the disciples, and after encouraging them, he said farewell and departed for Macedonia” (Acts 20:1-2).

This doesn’t mean we leave our spouse or cut off every relationship with people when they lash out after we touch their idols; but it does mean that until people are ready give up their idols, it is useless to keep confronting them on it. Notice what Acts 19:9 states, “But when some became stubborn and continued in unbelief, speaking evil of the Way before the congregation, [Paul] withdrew from them and took the disciples with him, reasoning daily in the hall of Tyrannus.” Do as Jesus tells us in regards to those who are not willing to listen to the truth, “And if anyone will not receive you or listen to your words, shake off the dust from your feet when you leave that house or town” (Matthew 10:14).

Until people are ready to give up their idols, the only thing you will do when you try to take those idols away is create a riot. We must love them and proclaim the truth, but after they riot against this, we are free from our duty (Ezekiel 3:16-21).

Since we are all worshipers at the core, nothing will stop us from serving some god. The only hope any of us have is that we are worshipping and serving the only true God.