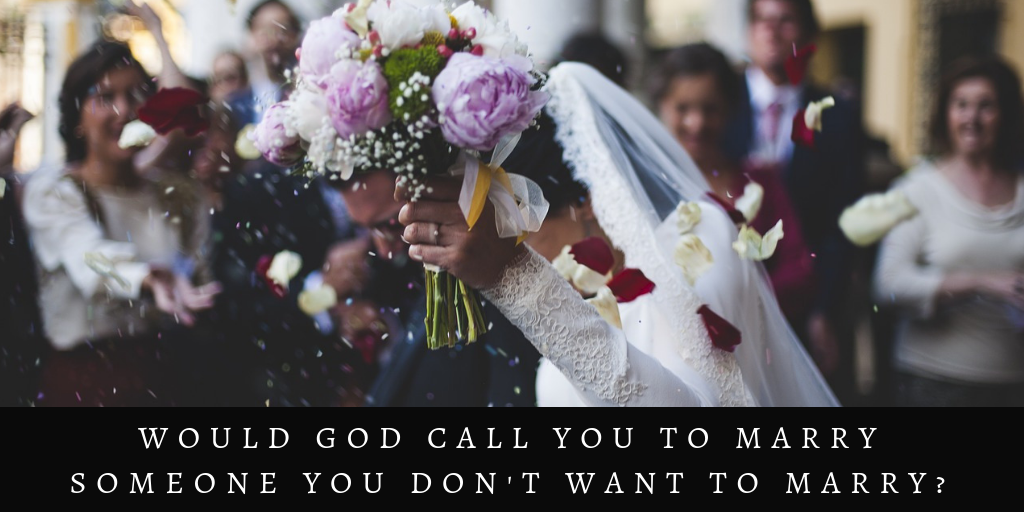 Here are three reasons I don’t believe God would call you to marry someone you do not want to marry.

No, Because Marriage Is an Option in the Bible and Not a Command

The first reason I do not believe God would call you to marry someone you don’t like is because within the Bible marriage is not a command for all people. You are not required to be married as a Christian. The Bible says you can choose to be married if you want, but it is not a biblical command for all Christians. Singleness is also a gift and a very biblical option (1 Corinthians 7:7). Jesus was single after all.

So how does one decide if they feel called to marriage or called to singleness? One way is to examine your desires as it talks about in 1 Corinthians 7. If you don’t want to be married, don’t get married. If you want to marry, you are free to pursue marriage.

No, Because All the Healthy Biblical Examples of Marriage Include a Desire to Want to Be Married

I don’t believe God would ever call you to marry someone you did not want to marry because there are no biblical examples of God doing this type of thing. Now, there are many bad examples of marriage and relationships within the Bible. However, oftentimes in the Bible stories are simply recorded because they are a part of the biblical narrative and are events that actually happened in history. Just because a story is in the Bible does not mean it is a story that God wants Christians to imitate.

(Also see, How Important Is Physical Attraction in a Christian Relationship/Marriage?)

No, But There Might Be Certain Things About Your Future Spouse that You Don’t Like that Much

But while there will be certain things you don’t like about your spouse, God would not call you to marry someone that you generally do not like overall and thus would not want to marry.

Christian marriage is supposed to reflect the relationship between Christ and the church (Ephesians 5:22-33). If God called Christians to marry people they did not want to marry, we would have to conclude that Jesus did not want to marry the church. This is obviously unbiblical. Jesus loves his church and a husband and wife should want to be married to each other.

While Jesus wanted to marry the church, this does not also mean that there are not sins within the church that Jesus does not dislike. In other words, God loves his people but there are sins within them that he wants to change. Likewise, when you get married, you should love your spouse and want to be married to him or her even though there will also be flaws in that person which you hope change as this person is sanctified and matures in Christ.