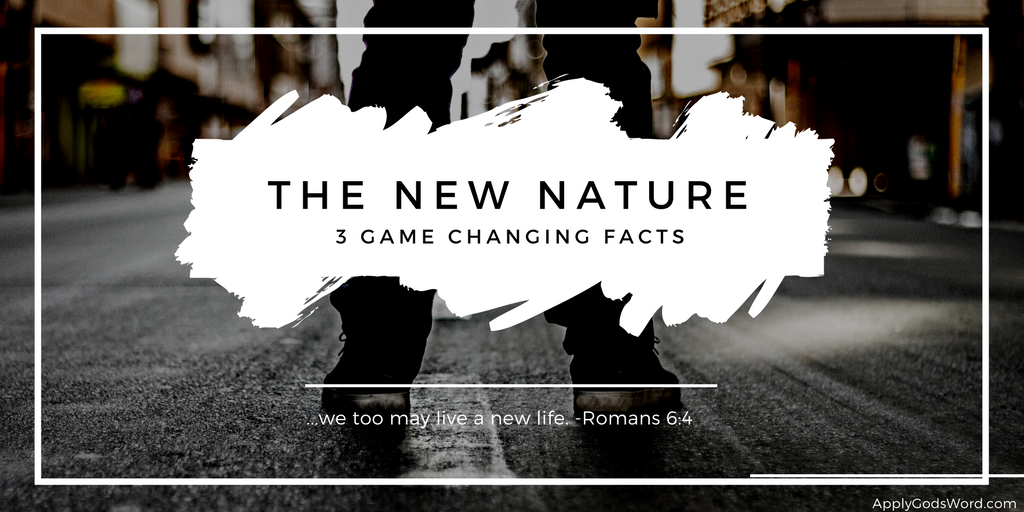 Martin Loyd Jones said, “Sanctification proceeds as we are led by the Holy Spirit to draw deductions from the doctrine of justification. Do you long to be holy? Do you long to have victory over sin in your mortal body? How can you do so? First, understand the doctrine. You cannot ‘work out your salvation with fear and trembling’ (Philippians 2:12-13) if we are unclear about the doctrine of salvation.”

The more we know the truth of God’s word in our minds, the more this truth is going to transform us and renew us into the image of God (Colossians 3:10).  Our actions reflect what we believe about God. As your realization deepens about who you truly are in Christ,the more deeply and consistently this reality will manifest into righteous living.

Fact 1: If You Are a Christian, You Are a New Person. You’re Not Becoming New

By definition someone can’t be both dead and alive. You’re either one or the other. Romans 6:4, 6-7:

We were therefore buried with him through baptism into death in order that, just as Christ was raised from the dead through the glory of the Father, we too may live a new life. . . . For we know that our old self was crucified with him so that the body ruled by sin might be done away with, that we should no longer be slaves to sin—  because anyone who has died has been set free (Greek word for “justified”) from sin. Now if we died with Christ, we believe that we will also live with him.”

Notice the past tense throughout these verses. You are not becoming a new person. When you become a Christian, you are instantly regenerated into a new creation through your identification with the risen Christ.  2 Corinthians 5:17 explains,“Therefore, if anyone is in Christ, the new creation has come: The old has gone, the new is here!”

Hebrews 1:3, “After he had provided purification for sins, he sat down at the right hand of the Majesty in heaven.” Vernon McGee says about this verse:

‘Sat down’ does not indicate that he is resting because he is tired, or that he doing nothing. It means that when he finished our redemption he sat down because it was complete. This is exactly what they seventh day meant in creation – God rested because it was complete; there was nothing more that he needed to do. Friends, you cannot lift your little finger today to add to the redemption he wrought for us on the cross [and in the resurrection]”

Fact 2: The New Nature Can’t Be Taken Away or Tainted When You Sin

The Greek words used in Romans 6:4 that are translated “new life” are “kainotes” for new and “zoe” for life. Kainotes means “newness of Spirit.” This is not like when I get a new pair of shoes, but when you see me in a year they are no longer new shoes. That type of newness is captured in the Greek word “neos,” which is a type of “new” that fades away and dies over time. “Kainotes” is word that denotes something that is a different substance of something else. It is that which replaces the old, obsolete with something that is better, superior, or more advanced.

For “life” Paul used the word “zoe” rather than the word “bios.” “Bios” refers to the type of life that is observable on the outside which you can record. It’s where we get our English word for “biography.” “Zoe” however refers to a metaphysical life, a life force that animates a living being.

Therefore “new life” or “kainotes zoe” in Romans 6:4 does not mean a fresh start, a new chapter in your biography, or a second chance. It means you have a new name written in an entirely different book. You are not a better version of the former you. You are now a totally new and different person. You are new in heart and in spirit (Ezekiel 36:26). You’re of different substance now unrelated to your sinful nature.

Nowhere in Romans 6 or in the entire Bible is there a claim that on this side of eternity someone will become totally sinless. There are people who teach that you can reach this state of not sinning any longer, but frankly they are just wrong.

Not only is there zero Scripture to support this idea, it is also obviously incongruent with real life. Nobody experiences a sinless life once they become a Christian. So how do you reconcile this idea that we are totally new in Christ and are no longer the sinful man we once were with the fact that we all still sin daily.

Fact 3: You Are No Longer Your Sin

Notice in Romans 6:2 that it says “we died to sin” but it does not say that “sin is dead.” In Romans 6:6 it states, “For we know that our old self was crucified with him so that the body ruled by sin might be done away with, that we should no longer be slaves to sin.”

The word for “done away with” in the Greek does not mean “annihilated or destroyed.” It means “rendered inactive, made of no effect.” It is the same Greek word used for “release” in Romans 7:2, “For a married woman is bound by law to her husband while he lives, but if her husband dies she is released from the law of marriage.” The law is still there but since her husband died she no longer needs to obey the law; its rendered inactive, powerless over her. Her contract was broken, therefore the law of her marriage no longer has authority over her.

In the same way, now that we are a new creation, it doesn’t mean the presence of sin has gone away, it just means the penalty of sin was paid for and the power of sin to control you has been defeated. Sin has no control over the new man because the old contract was broken. That’s why Romans 6:6 ends with “that we should no longer be slaves to sin.” Whatever you obey is your master. Because we died with Christ and are a new creation, we no longer need to obey sin anymore. Romans 6: 12-13 states:

So sin does not have control over the true you. However, what the sinful nature does still have control over is your body. The phrase in Romans 6:13 “any part of your body” or as another translations puts it, the “members of your body,” certainly includes your physical body parts; but it also includes your mental powers, the power of thought, the power of reason, the power of imagination, emotions, your appetite, your vocal chords – it includes everything that makes a person function as a human. So Paul is saying that although none of these things are sinful by themselves, they all can be controlled either by the power of sin or by your new nature in Christ.

It’s clear as can be that sin is not dead. If sin were totally dead then we wouldn’t have to worry about letting it reign in our mortal bodies as Romans 6:12-13 tell us to resist. And notice that the body is not the problem but rather the sin living in the body.

The body is not sinful but it is weak to sin’s control; the body is neutral by itself. It can be controlled either by sin or by righteousness. If the body were the problem then suicide would be the solution. But we all know from a general reading of Scripture that just because you die doesn’t mean you are made perfect unless you are Christian. People who die without Christ, as disrupting as it is to our human minds, go to hell when their earthly bodies die. The destruction of the body is not the cure.

Paul says in Romans 12:2 we are to offer our bodies as living sacrifices, holy and pleasing to God. We are told in 1 Corinthians 6:19 that our bodies are temples of the Holy Spirit. The Holy Spirit would not dwell in a sinful temple. God would not want a sinful sacrifice.

So in Romans 6:12-13 Paul is talking about three different things. 1. There’s “you,” meaning the true you in Christ. 2. There’s the sinful nature. 3. And there’s the body. So when your body commits a sinful act it is because your sinful nature is controlling your body.

Paul is making it clear that when you sin it is not the new you sinning. Jesus meant what he said, “The good tree cannot bear bad fruit and bad tree cannot bear good fruit.” It’s either one or the other. You’re not a bipolar Christian. You are not the middle aged Christian, somewhere between the old man and the new man. The “true you” is the new man in Christ.

You are not sometimes the old man and sometimes the new man. Your body is sometimes controlled by the old nature or the new nature. But the real “you” is now just the new nature. If you were truly raised from the dead in Christ, you will never die again to sin (Romans 6:7-10). But you are in a battle over control of your body. Martin Loyd-Jones explains:

Paul never says that sin is dead; what he does say is that we are dead to sin. Sin is still alive in our mortal body; and if we do not realize that and deal with it, it will soon reign in our mortal body. Sin is not eradicated out of us, and it never will be as long as we are in this mortal body. Sin is in our mortal body and it is always striving for mastery and for control in the Christian. It can never dominate over the life of Christ in him, but it is always striving to dominate his body. It may indeed dominate his body for a time, and when it does so, it is what we call “backsliding.” Sin is there . . . you always have to remember that, and not allow it to do so.”

So the big idea here is that the new life you have, the true you in Christ, is totally perfect. Jesus granted his perfections to you in full (justification), and now the rest of your life is a learning process on how to live from that newness (sanctification).