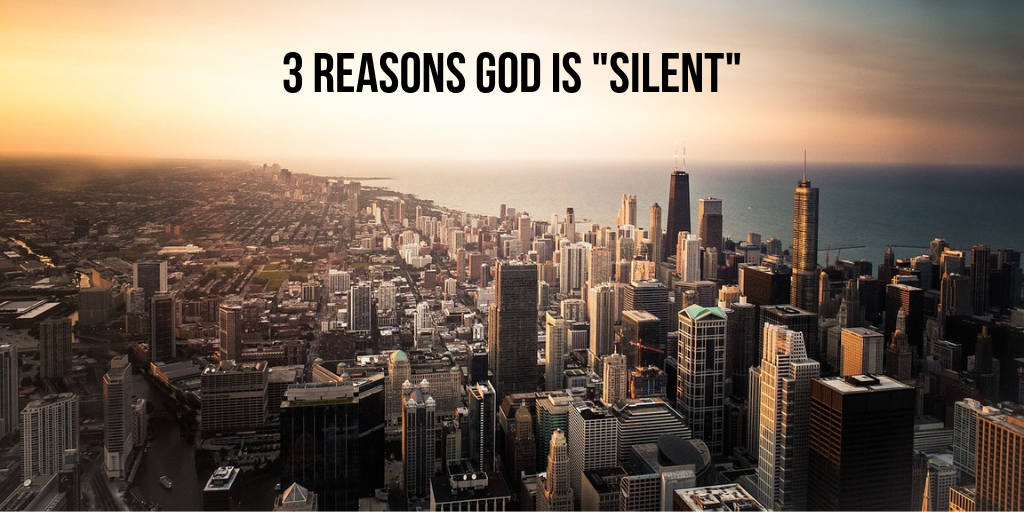 In Hebrews 4 we learn that Jesus Christ is our great high priest. This means that Jesus, God himself, mediates for us as we seek to come into the presence of God. So the first key to hearing the voice of God is to come before him through Jesus Christ, for without Christ we can’t truly have a relationship with God. As Hebrews 4:14-16 beautifully expresses:

Since then we have a great high priest who has passed through the heavens, Jesus, the Son of God, let us hold fast our confession. .  . . Let us then with confidence draw near to the throne of grace, that we may receive mercy and find grace to help in time of need.”

With that said, even when we truly are saved by receiving God’s grace through faith in Jesus Christ, throughout many seasons of life it will feel like God is silent. God is never actually silent. He’s always communicating to us. But here are 3 reasons it can sometimes feel like God is remaining silent.

1. It Will Feel Like God Is Silent If You Are Expecting God to Speak in Only One Certain Way

Many times the real reason we can’t hear God is because our expectations of how God will speak are blocking us from hearing God in other ways.

Sometimes we want God to speak through our circumstances and make something happen in our lives as a sign. But God may not want to do that this time. Instead he may want to answer you through his word this time as Hebrews 4:12 states he will do.

One example of Jesus seeming to remain “silent” when in fact he was not can be found in Matthew 11 when he was speaking to the crowds about John the Baptist. Matthew 11:13-19 states:

For all the Prophets and the Law prophesied until John, and if you are willing to accept it, he is Elijah who is to come. He who has ears to hear, let him hear.

But to what shall I compare this generation? It is like children sitting in the marketplaces and calling to their playmates,

When we lock ourselves into a certain set of expectations, we often miss out on hearing God. God is never silent, but he won’t always speak to us in the ways we are expecting.

2. God Will Seem Silent When You Are Asking Him the Wrong Questions

Sometimes it’s not that we can’t hear God; it’s just that God is not saying what we want him to say. God will seem silent when we are listening for him to only say what we want to hear but he is saying something different.

For example, you may want God to give you an answer about a relationship question you have, but God might be trying to talk to you first about your relationship with him. If you are focusing on a different topic than the one God is actually speaking to you about, it will feel like God is being silent. We have a great example of Jesus redirecting someone’s attention in John 21:20-22 when Peter was asking about John. It states:

Peter turned and saw the disciple whom Jesus loved following them, the one who also had leaned back against him during the supper and had said, ‘Lord, who is it that is going to betray you?’ When Peter saw him, he said to Jesus, ‘Lord, what about this man?’ Jesus said to him, ‘If it is my will that he remain until I come, what is that to you? You follow me!’”

Sometimes you will ask God a question but he will redirect you and tell you to focus on something else entirely. In this example Peter was asking about John but Jesus changed Peter’s attention away from John and pack onto Peter. But what if Peter would not let it go and just kept focusing on John even though Jesus told Peter he wasn’t going to talk about that? If Peter would have done that, Jesus would have probably stopped talking until Peter was willing to follow Jesus’s lead. I believe that because that is what we see Jesus do in John 19:9-11. In this passage Pilate is asking Jesus questions, some of which Jesus answers and some of which he doesn’t. It states:

He entered his headquarters again and said to Jesus, ‘Where are you from?’ But Jesus gave him no answer. So Pilate said to him, ‘You will not speak to me? Do you not know that I have authority to release you and authority to crucify you?’ Jesus answered him, ‘You would have no authority over me at all unless it had been given you from above. Therefore he who delivered me over to you has the greater sin.’”

In one moment Jesus remains silent because Pilate asks Jesus the wrong question. When Pilot asks a question Jesus did want to answer, he answered. Likewise, when God seems silent in our lives, sometimes it is because we are asking him the wrong questions.

God is the leader in our relationship with him. It is not our job to tell God what to do and what to say. Our job as followers of Christ is to follow wherever God is leading. When we ignore God’s leading it will feel like he is being silent.

3. It Will Feel Like God Is Being Silent When Your World Is Too Loud to Hear Him

Those who hear the Lord are the ones who consistently quiet their hearts to listen to him. As Psalm 62:5 states, “For God alone, O my soul, wait in silence, for my hope is from him.” Sometimes it feels like God is remaining silent when in fact he is speaking but there is too much noise in your life to hear what he is saying.

We have to find quiet places to hear God, both in practical ways and in internal ways. You need physical spaces where you can truly be alone with God when no one else is watching. But you also need to leave the internal noise behind you as well. All the thoughts, worries, and concerns that we have about our lives can often crowd out the voice of the Lord speaking to our hearts.

So if you want to hear the voice of the Lord in your heart, you need to still your heart so you can hear his voice.