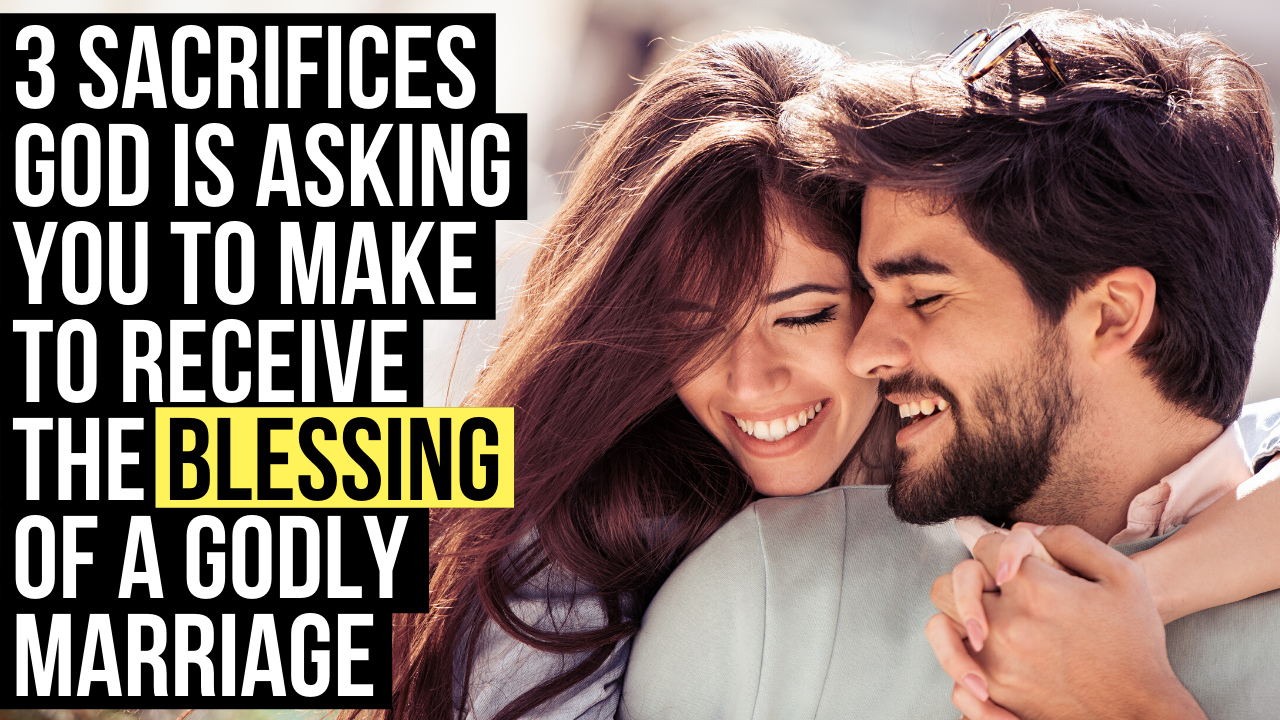 Here are 3 sacrifices God is calling you to make if you desire to have a godly marriage one day.

1. God Is Asking You to Sacrifice Short-Term Pleasure So He Can Bless You With Long-Term, Joyful Stability

Nowhere in the Bible does God say that we need to earn the good things he gives to us. If that was the case, none of us would receive good things from God because none of us meet the righteous requirements of God. Only through the gospel of Jesus Christ are we made right with God. Only by grace are we blessed with good things.

Nonetheless, God calls us to make sacrifices not to earn something from God but to receive something from God. There’s always a process of letting something go before God will give you something better. The primary example of this is in regards to our former ways of living before we were walking with Christ. Jesus said if we want to receive the new life he has for us by grace we have to leave our old lives behind. Ephesians 4:22-24 (NIV) states:

You were taught, with regard to your former way of life, to put off your old self, which is being corrupted by its deceitful desires; to be made new in the attitude of your minds; and to put on the new self, created to be like God in true righteousness and holiness.”

The Christian life is full of both rejecting and accepting. We have to reject what God does not want for us and accept what God does want for us. The same is true when it comes to a godly marriage. And notice I’m using the phrase “godly marriage.” Anyone can get married. You don’t have to make sacrifices for God to get married. The world is full of unbelievers who are married. But it is impossible to have “a godly marriage” without Christ in the middle of that relationship.

A godly marriage is formed when two Christian singles are rejecting quick pleasures and working towards long-term joy in God during their singleness as individuals and then they simply come together and keep doing the same thing as a couple. If you are not making biblical sacrifices for Christ in singleness you won’t magically start doing this in marriage one day.

So if you want the blessing of a godly marriage one day, you have to start the rejecting and accepting process right now in singleness.

2. God Is Asking You to Sacrifice Your Connection to Worldliness If You Desire the Blessing of a Godly Marriage

One of the sneakiest ways the enemy tries to keep Christians in a season of unwanted singleness is by tempting them to believe they are obeying God just as long as they don’t date an unbeliever. Many Christians put themselves in the relationship equivalent of “no man’s land” by choosing to only date a godly Christian but surrounding themselves with only unbelievers living in the world.

When you do that, you just end up getting stuck. You choose to not date a non-Christian, which is good. But you will end up dating no one because you never have any opportunities to develop friendships and meaningful relationships with other Christians. Usually what happens in a situation like this is that the person eventually breaks down and falls for an unbeliever even though they know deep down this is not what God wants.

So even if you are committed to not dating an unbeliever, you still have to make the sacrifice of breaking off your connection with the world. When you live with one foot in the world and one foot in the church, you are living a divided life that will keep you stuck right where you are.

Think of it this way: you should seek to become the type of person you would want to date. If you want to date a Christian who is faithfully serving Christ and staying out of sinful worldliness, you have to live that way as well or else that type of person will not be attracted to you. As James 4:4-5 states:

You adulterous people! Do you not know that friendship with the world is enmity with God? Therefore whoever wishes to be a friend of the world makes himself an enemy of God. Or do you suppose it is to no purpose that the Scripture says, ‘He yearns jealously over the spirit that he has made to dwell in us’?

The common argument against this counsel is, “Aren’t Christians supposed to love the lost and be a light to them?” Of course we are, but how can we in good conscience try to win people over to Christ as we simultaneously ignore God’ word by becoming unequally yoked with them, the very word we are telling others they should obey. God has called us to be light to the world but he has also called us not to be friends with the world. This means we are not to join in the ways of sin so rampant amongst non-Christians. It means we are called to be friendly and kind towards unbelievers but we are not to confide in them and depend on them as friends do, less we be led astray by their unbelief.

So if you want a godly marriage one day, you have sacrifice your connection to the world now in singleness. You can’t have one foot in the world and one foot looking for a godly spouse. If you are the only Christian in your circle of friends you will always feel alone and most likely will not find a godly spouse. Go all in with God if you want all of God’s blessings in your life.

3. God Is Asking You to Sacrifice Your Freedom from Spiritual Discipline If You Desire the Blessing of a Godly Marriage

One of the lies many Christians believe is that discipline and freedom are opposed to one another. But in fact, the opposite is true. Those who want to be free from spiritual discipline end up living as slaves to sin. But those who practice the spiritual disciplines end up being able to live free for Christ.

What do I mean by “spiritual disciplines”? I’m referring to those means by which our hearts are fed. God has an abundance of grace and joy he is ready to give us, but we have to take up and eat daily. When we reject the spiritual disciplines like daily prayer, daily Scripture reading, and weekly participation with our local church, it is like walking by a feast God prepared for us and going to eat some worms and maggots we found in the dumpster in some back ally.

Discipline will cause you to come into the presence of God even when you don’t feel like it, but once you are in his presence your feelings will change. I love what is said about the early years of Samuel in 1 Samuel 3:19-21. It states:

And Samuel grew, and the Lord was with him and let none of his words fall to the ground. And all Israel from Dan to Beersheba knew that Samuel was established as a prophet of the Lord. And the Lord appeared again at Shiloh, for the Lord revealed himself to Samuel at Shiloh by the word of the Lord.”

My point in saying all this is that if you want God to not let your prayer request for a spouse fall to the ground, the Lord must be with you as he was with Samuel. I’m not saying God will give you everything you want just as long as you do your daily devotionals. I’m just pointing out that if we want God’s will done in our lives, we have to follow God with all of our hearts.

God revealed himself to Samuel “by the word of the Lord.” If we want God to reveal himself to us so we can follow his path for our lives, including when it comes to relationships, we must eat daily from God’s word which will require sacrifice and discipline.