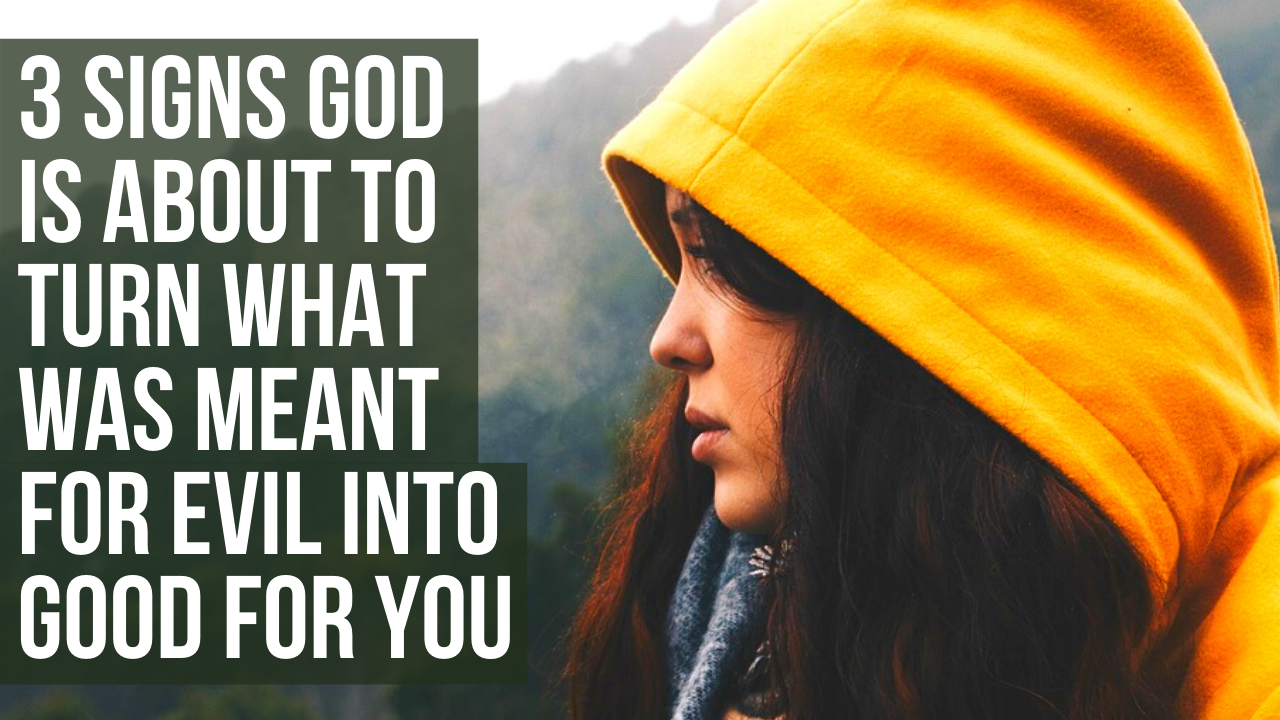 Here are 3 signs God is going to turn the evil someone meant for you into good instead.

1. If God Is Training You Through Someone Else’s Sin So You Can Help More People, This Is a Sign God Is Turning Evil for Good

The key Bible text for this idea of turning what was meant for evil into good is found in Genesis 50:20-21. Here we have Joseph who was actually sold into slavery by his brothers, but God used this evil act to actually place Joseph in a position of power which God then used to save his brothers and many others. Joseph said to his brothers:

‘As for you, you meant evil against me, but God meant it for good, to bring it about that many people should be kept alive, as they are today. So do not fear; I will provide for you and your little ones.’ Thus he comforted them and spoke kindly to them.”

Joseph’s story was really a foreshadowing of Jesus Christ. Evil people thought they were going to kill Jesus, but God actually used the crucifixion as the one means of true salvation for all people, including for the people who killed Jesus.

Likewise, God can turn evil for good in our lives when we allow him to empower us to use these evil attacks as opportunities to show the love of Christ. For example, if you forgive someone who sinned against you, you are showing that person the power of God. Satan wants you to spread more hate in return, but if you respond with forgiveness, God gets the glory. Or another example would be if you learn so much from a bad relationship that you are then able to see what you need to see so you can enter into a true godly relationship one day, this is God turning evil into good.

2. If God Is Exposing the Sins of Others Against You to Strip Away Negative People in Your Life, This Is God Turning Evil for Your Good

People often don’t know that they have a deadly disease until that disease starts forming some negative symptoms in that person’s body. Ironically, the diseases that hide themselves the longest are often the ones that do the most damage because the person did not even know they had this disease and thus they were not able to start treating it sooner. Early detection is crucial if you hope to survive a deadly disease.

Likewise, early detection of someone evil in your life is crucial as well if you hope to minimize the damage they will cause you. We can’t know people’s hearts; all we can do is observe their actions. Shady people who desire to sin against us, however, do their best to hide their sins as long as possible so they can do the most damage.

1 Corinthians 5:11 says, “But now I am writing to you not to associate with anyone who bears the name of brother if he is guilty of sexual immorality or greed, or is an idolater, reviler, drunkard, or swindler—not even to eat with such a one.” Proverbs 14:7 also states, “Leave the presence of a fool, for there you do not meet words of knowledge.”

How can you leave a fool if you don’t know that person is a fool? How can you avoid associating with someone who says they are a Christian but is living in sin if you are unaware of their sinful actions?

While it might be very painful when God finally exposes what someone has been doing against you in secret, in actuality this is God sparing you of the greater amount of pain that could have happened if this evil was not exposed. God turns evil into good when he shows us the truth about someone so we can either reconcile with them if they repent or so we can get them out of our lives and live free from the evil they were causing.

3. If God Is Allowing You to Proclaim the Gospel More Because of This Evil Person Coming Against You, This Is a Sign God Is Actually Turning What Was Meant for Evil Into Good

There are countless other ways that God turns what was meant for evil into good. I’d actually love to hear how God has done this in your life in the comment section below.

According to Scripture, one of the primary ways God uses evil for good in our lives is by using these bad things that happen as a way of proclaiming the gospel in ways that would not have otherwise have happened unless this evil occurred. One great example of this can be found in the life of Paul who was imprisoned by evil people for proclaiming Christ. In Philippians 1:12-14, however, Paul states:

I want you to know, brothers, that what has happened to me has really served to advance the gospel, so that it has become known throughout the whole imperial guard and to all the rest that my imprisonment is for Christ. And most of the brothers, having become confident in the Lord by my imprisonment, are much more bold to speak the word without fear.”

Because Paul was put in prison, God allowed Paul to witness to those in the prison. Paul’s boldness was then also used to inspire other Christians to be even more bold for the Lord as well. This is what God wants us all to do when someone tries to bring evil against us. When we keep proclaiming Christ even when people do bad things against us, this is how God turns what was meant for evil into good.