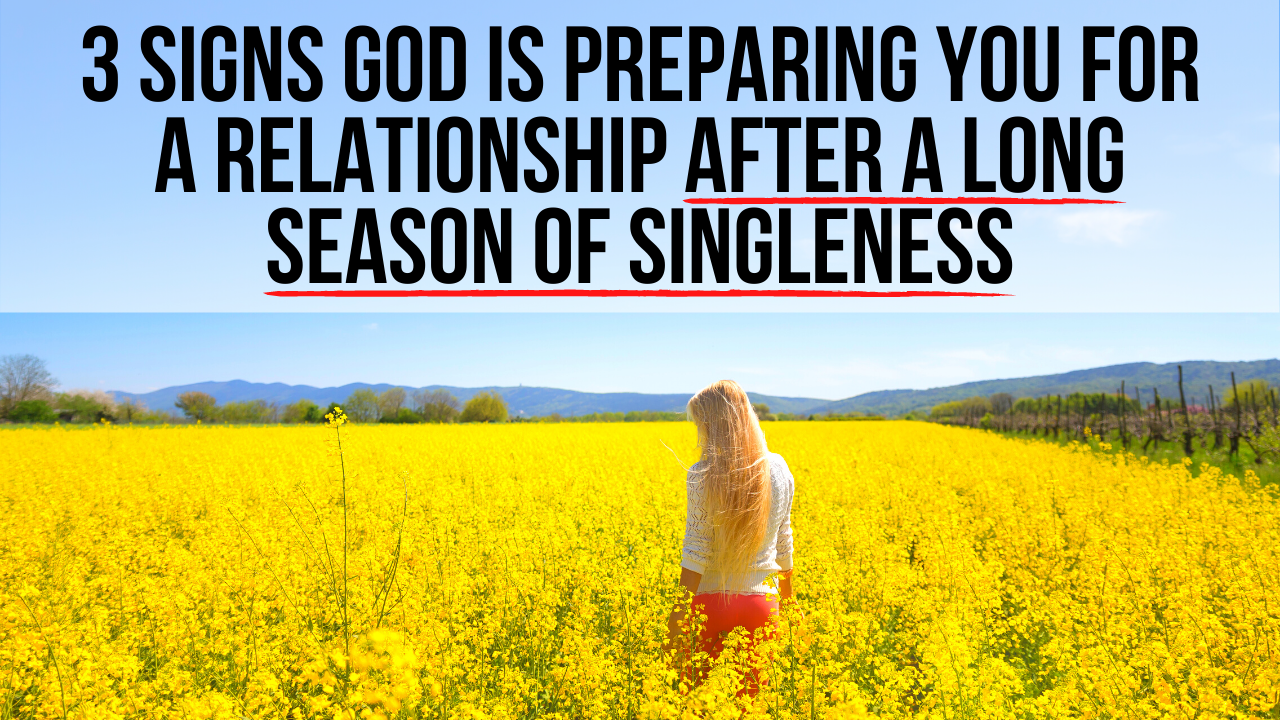 Here are 3 things that often happen when God is preparing you for a relationship after you’ve been in a long season of singleness.

Perhaps you thought you didn’t have the desire for marriage. Or perhaps you once had a desire for a relationship but then you thought it died after something painful happened to you. Those two things are possible. When God calls someone to a life of singleness, one sign this person has that call is a lack of a desire for marriage. And certainly some people can get so hurt by a relationship that they never want one again.

But what also happens even more commonly in my opinion is that people think they don’t have a desire for marriage or they think their desire for a relationship died because of a painful experience in their past, but in reality that desire was just sleeping. Song of Solomon 2:7 states, “Do not arouse or awaken love until it so desires.” This verse is often used to warn people not to awaken a desire for love too soon, which is a good warning. But it can also be used to point out that there is a right time for your desire for love to awaken.

There are many reasons God could have put this desire to sleep in you. Perhaps he had a special purpose for you during one season of your life where he needed you single, but then that purpose changes and you would be better off married now. Or perhaps he put that desire to sleep so you could refocus on him and he could heal your heart. Perhaps he knew you couldn’t heal properly if you still believed you would be married one day. Through your belief that you would be alone forever, perhaps God drew you to himself and in the process healed your heart. But now that you are healed and ready, perhaps he now awakens that desire for marriage again.

Either way, it’s clear in Scripture that romance is not a command. Rather, it is an option for those who desire to glorify God through it. So if your desire for a relationship has recently awakened when you thought it never would, this could be a sign God is preparing you for a relationship even though you have been in a long season of singleness.

2. If God Has Given You a Renewed Energy to Try Something Different That You Have Not Tried Before in Order to Meet The One He Has for You, This Could Be a Sign God Is Preparing You for a Relationship Even Though You Have Been Single for a Long Time

I grew up playing hockey, and I remember my coach making a really good point that helped our team break out of a losing streak we were in. He said something to the effect of, “If you want different results, you have to try something different. You guys keep doing the same things over and over again, so we keep losing. We have to try something different if we want to start winning games.” His speech made a lot of sense to the team so we were willing to try some different things and it helped us to start winning more.

This advice can be applied to specific parts of our lives in general (Proverbs 26:11). Yes, certain things are just out of our control. So I’m not saying that if you have been single for a long time this is entirely your own doing. There are many variables that truly are out of our control when it comes to relationships, so I’m truly not saying you are the only variable that matters when it comes to relationships. With that said, it is true that your actions are a major variable in the equation.

For example, one variable when it comes to meeting new people is the places we go. If you go to place A, you will meet different people than if you go to place B. So clearly this has some affect on people meeting others to date or not meeting anyone to date. But the person who decides where you go and where you spend your time is you. So your choices about where you spend your time and who you decide to spend it with directly impacts who you will meet which directly impacts the possibility of you meeting someone new.

3. If the Person God Has for You Is Finally Ready for a Godly Relationship, This Could Mean You Will Be in a Relationship Soon After a Long Season of Singleness

As I said in point 2, there really are variables that are outside of our control. One variable that I think many of us forget about is the other person in the future marriage God has for you. In other words, it’s possible you have been single for longer than you have wanted because the person God has for you was not ready for the relationship. You could have been ready for years but perhaps the person God wants you with needed more time.

This is one reason I think it is wise to pray for your future spouse even when you don’t know who they are. You can pray that God is strengthening them, helping them overcome temptation, and helping them get ready for you two to meet. I truly believe that God is never holding back something good just for no reason. When you two would both be blessed by being together and this relationship will glorify God, I believe God will give it to you without delay. When there is a delay, there’s always a good reason for it.

It’s kind of like Paul and Barnabas in their ministry partnership. Barnabas was serving the Lord before Paul was even converted to Christianity. But eventually God changed Paul and made him ready to be an apostle. Then Barnabas and Paul could team up in ministry.

Therefore, if the reason for the delay was that your future spouse needed some maturing to do before being ready to meet you, God could bring you out of a long season of singleness once that person is ready to honor the Lord with you.