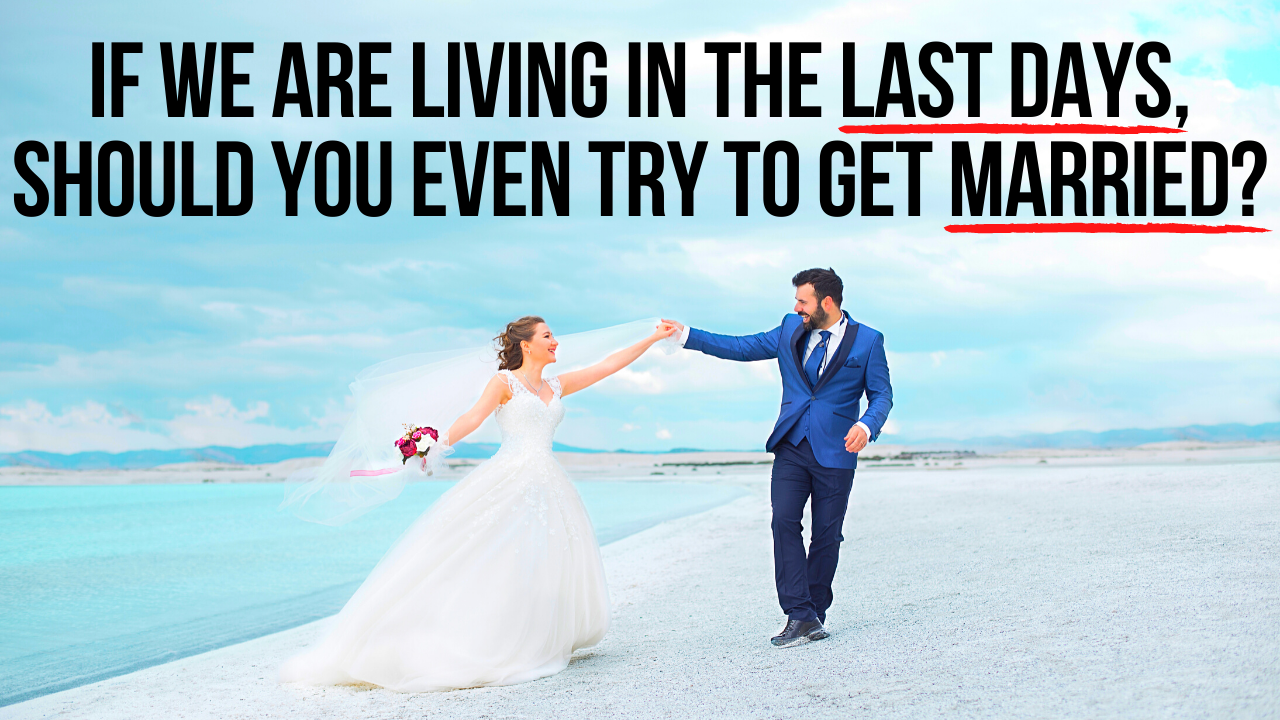 One comment I have received a lot lately goes something like this, “Wake up! Stop wasting your time with relationships. The end is near, God doesn’t want you to get married now!”

Is this true? If we are living in the end times, is it pointless to even try to date and then marry someone? Here are 4 points to consider.

Among Christians, the views vary widely about when Christ is going to return and how the order of events will happen. My goal in this article is not to add to that conversation. Rather, my aim here is to answer, “If we are in the end times, should people still try to get married?” In short, my answer is yes, I do believe people should keep getting married until the day Jesus returns.

One reason I believe this is because of the order in which God has given us certain truths about the end times and about marriage. Throughout the New Testament Christians are given instructions about how to get married, who to marry, and how to honor the Lord in marriage. But all of these instructions were inspired by the Holy Spirit after Jesus already told all of us to live as though the end could happen at any moment. For example, in Matthew 24:36-39, 44, Jesus said:

So even if we are living in the end times right now, it’s clear that all the biblical instructions about getting married and how to be a godly wife or husband still apply.

2. Marriage Is a Witness to the World About God’s Love, and We Are Called to Be a Witness Until Jesus Returns

And you will hear of wars and rumors of wars. See that you are not alarmed, for this must take place, but the end is not yet. For nation will rise against nation, and kingdom against kingdom, and there will be famines and earthquakes in various places. All these are but the beginning of the birth pains. . . . And this gospel of the kingdom will be proclaimed throughout the whole world as a testimony to all nations, and then the end will come.”

When talking about marriage, in Ephesians 5:32 Paul said, “This mystery is profound, and I am saying that it refers to Christ and the church.” Through a biblical marriage where a husband lays down his life for his wife and a wife willingly follows her husband, the world gets a picture of how Christ loves the church and how the church is to follow him. Marriage is supposed to be a Christian witness to the lost world.

1 Peter 4:7-8 says, “The end of all things is at hand; therefore be self-controlled and sober-minded for the sake of your prayers. Above all, keep loving one another earnestly, since love covers a multitude of sins.” Marriage isn’t the only way to show love, but it is a very important way to show love that was created by God. Even though the end is near, we are called to keep showing love.

3. Marriage Helps You Live a Holy Life, Which Is What We All Should Be Striving For Until the Day of Christ’s Return

Therefore, stay awake, for you do not know on what day your Lord is coming. But know this, that if the master of the house had known in what part of the night the thief was coming, he would have stayed awake and would not have let his house be broken into. Therefore you also must be ready, for the Son of Man is coming at an hour you do not expect. Who then is the faithful and wise servant, whom his master has set over his household, to give them their food at the proper time? Blessed is that servant whom his master will find so doing when he comes.”

Jesus didn’t say to stop doing what God has said to do because the end is near. Jesus said make sure you are extremely careful to do exactly what God has said because the end is near. God wants us all to live a holy life, and for some, God has called them to marriage so they can be better equipped to live a holy life. As 1 Corinthians 7:2 states, “But because of the temptation to sexual immorality, each man should have his own wife and each woman her own husband.”

4. Marriage Isn’t Ultimately About Us. Ultimately It’s About God’s Glory

I believe many people think they should stop trying to get married during the end times because they wrongly think marriage is primarily about human happiness. Certainly relationships and marriage can be turned into something worldly and sinful. But from the beginning, God created the husband and wife relationship in marriage to bring himself glory. Genesis 1:27-28 states:

This command by God does not change if we are in the last days. For in Matthew 24:46-51, Jesus said:

Blessed is that servant whom his master will find so doing when he comes. Truly, I say to you, he will set him over all his possessions. But if that wicked servant says to himself, ‘My master is delayed,’ and begins to beat his fellow servants and eats and drinks with drunkards, the master of that servant will come on a day when he does not expect him and at an hour he does not know and will cut him in pieces and put him with the hypocrites. In that place there will be weeping and gnashing of teeth.”

For these reasons, people should still pursue marriage even if we are living in the end times.