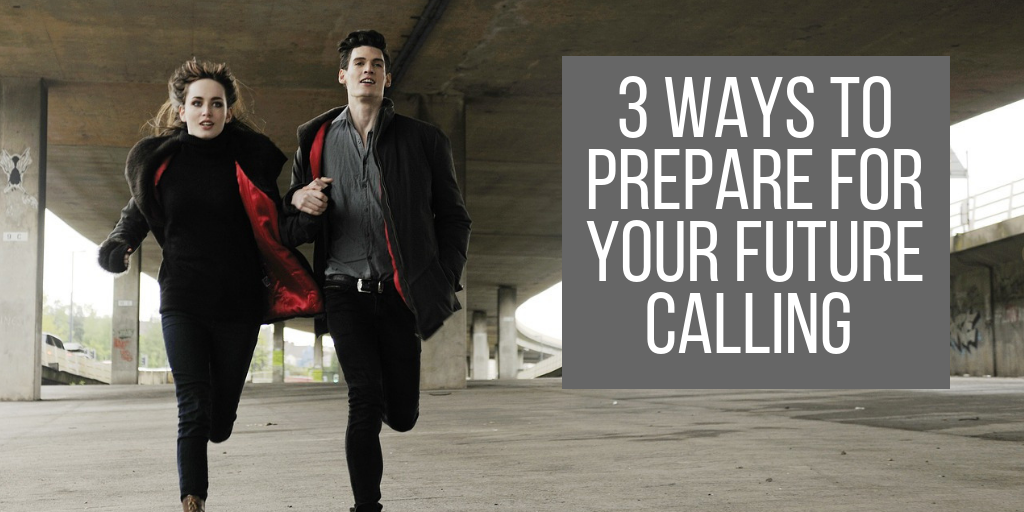 How can you prepare for you calling from God? By studying the early life of David in 1 Samuel 16, we can discover at least three ways to prepare for our callings in the future.

Prepare for Your Calling By Preparing Your Heart (1 Samuel 16:1-7)

When we start to think about preparing for our callings, words like “training”, “instruction,” and “schooling” might come to our minds. While these are certainly good ways to prepare for something in the future, when it comes to a calling from God, we must always start with our hearts.

When God starts working on someone, he always starts with that person’s heart. The heart of the human problem is always the problem of the heart, therefore God always begins with our inner core. All the practical skill in the world will not make you good at your calling if you have an immature heart.

For example, if you are called to leadership, you can have all the knowledge, tips, and latest strategies, but if your heart is full of evil you will become a corrupt leader. If God is calling you to serve, you can have all the knowledge in the world on the best social services to offer those in need, but if you are not humble in your heart you will not be a good servant.

And on the other hand, if you are a leader who has a lot to learn strategically but you are mature in your heart, you will need to learn those things you don’t know but you can develop into a good leader. If you are humble but you don’t know how to help people in practical ways, you can learn that side of service.

This is what we see with God’s development of David. Before David had the skills to be king, God anointed him to be kind. Why? Because David had the right heart even though he did not yet possess the right skills:

“When they arrived, Samuel took one look at Eliab and thought, ‘Surely this is the Lord’s anointed!’ But the Lord said to Samuel, ‘Don’t judge by his appearance or height, for I have rejected him. The Lord doesn’t see things the way you see them. People judge by outward appearance, but the Lord looks at the heart.’” (1 Samuel 16:6-7)

Prepare for Your Calling By Receiving God’s Anointing (Samuel 16:8-13)

When it comes to earthly callings, we need to make practical steps towards equipping ourselves so we are prepared for the tasks we want to do. But when it comes to a spiritual calling, we have to first seek the Holy Spirit’s filling, for if we are not walking in step with the Spirit we will not be able to adequately fulfill our callings in life.

Notice that before David did anything noteworthy like kill David, win military victories, or write any songs for the Lord, David was anointed. So often we think that to receive God’s anointing we need to do great things. But in the Bible we see that God’s anointing does not come on great men. His anointing makes men great.

“So as David stood there among his brothers, Samuel took the flask of olive oil he had brought and anointed David with the oil. And the Spirit of the Lord came powerfully upon David from that day on.” (1 Samuel 16:13)

From that day forward God was powerfully upon David. Because the Spirit of God was on David, he was able to walk in his calling. Don’t ever try to do God’s will without God’s power. If you want to walk in the plan God has for your life, you first must prepare by being empowered through the presence of the Holy Spirit.

All Christians are baptized in the Spirit, but we must also actively seek to be filled with the Spirit on a daily basis. You can have the Holy Spirit but walk out of step with the Spirit from time to time. But if you want to really fulfill your calling, you must become an expert at following the Spirit’s personal leading in your life (Ephesians 3:16).

Prepare for Your Future Calling By Fulfilling Your Current Calling (1 Samuel 16:14-23)

Rather, people feel called to be the preacher, to be the leader, to be the one leading the charge. And maybe one day you will have that calling. But I can promise you that you won’t go from zero to being a hero in one swift motion. If you always reject the service opportunities that are available, you will never become qualified to serve in the ways you really want to serve.

I love that David was anointed to be king but God did not immediately make him the king. David came in from the fields tending sheep, came into the house and was anointed by Samuel to be king over all Israel, but then God sent him back out into the fields.

In 1 Samuel 16:14-23, we see that David was enlisted in Saul’s army. Saul needed a harp player to help sooth his mind and David fit the bill. It would have been easy for David to have receive this call to serve the king but to then refuse because he felt he was supposed to be the king himself. But that’s not what happened. David humbly served in the calling God had for him now rather than holding out for the job position he really wanted.

Rather than feel entitled because of God’s anointing, David answered the call to serve, “So David went to Saul and began serving him. Saul loved David very much, and David became his armor bearer” (1 Samuel 16:21).