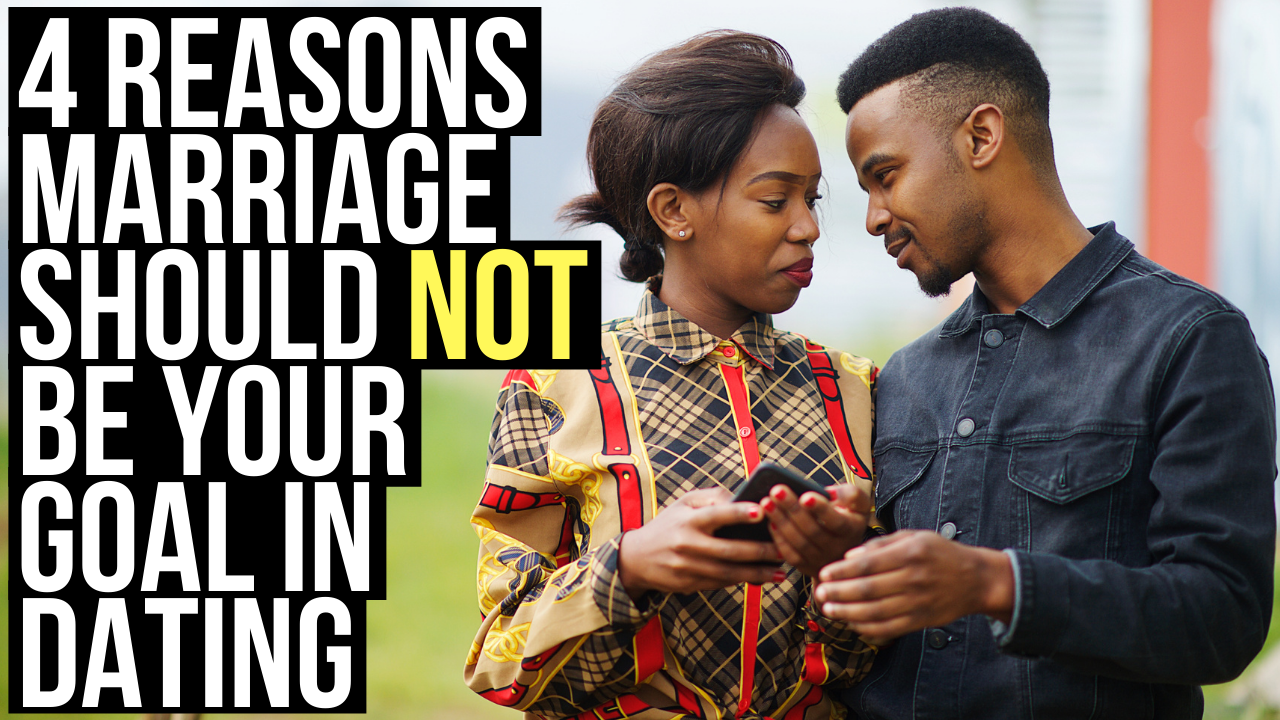 Here are 4 reasons I believe marriage should not be your goal in dating someone.

1. Clarity, Not Marriage, Should Be the Goal of Dating

Another danger in making marriage the goal of dating is that you will try to marry someone even when you see red flags. If you see marriage as a win and breaking up as a failure, you will try to stay together even when God is telling you to break up.

Therefore, don’t make marriage your goal for dating. Make clarity your goal for dating. A good passage to pray over is Ephesians 5:15-17, “Look carefully then how you walk, not as unwise but as wise, making the best use of the time, because the days are evil. Therefore do not be foolish, but understand what the will of the Lord is.”

2. Confirmation, Not Marriage, Should Be the Goal of Dating

As I said in point 1, if you truly know God is telling you to marry someone, I believe it is unwise to date them. Do what God says. Just marry them.

But when God is telling you to marry someone, he will give you an abundance of confirmation. When God reveals the one, you will date this person, the relationship will be healthy, and your inner feelings will be confirmed by outside evidence.

Proverbs 30:5 states, “Every word of God proves true.” When something is truly said by God, it will be confirmed in reality by actually happening.

3. Date to Learn More About Yourself and Others, Not to Marry the First Person You Date

There are basically two common schools of thought among Christians when it comes to the goal of dating. Some Christians fall into the “courting camp.” These people typically believe you should only court someone when you have a strong belief you want to marry this person. Other Christians fall into the “dating camp.” These people typically believe having a boyfriend or girlfriend is a good thing. Rather than dating to marry, they are fine with just dating to date.

Personally, I believe the courting mindset is too restrictive and the dating mindset is too worldly. Therefore, I believe you should try to take the best of both worlds. Unlike courting, use dating to learn more about yourself and others. Without dating, you will never really learn anything about the opposite sex, what you like, what you don’t like, who you relate to, and who you don’t. But if you just date to date, you will never get married and you will get stuck in worldly relationships.

Many people think that to get married, you must glorify God. Glorifying God becomes the entry price into marriage. This is not biblical.

This same thing is true for dating. Use dating to bring God glory. Want to know how to do that? Here’s an article I answer the question, “How can you glorify God in a relationship?”