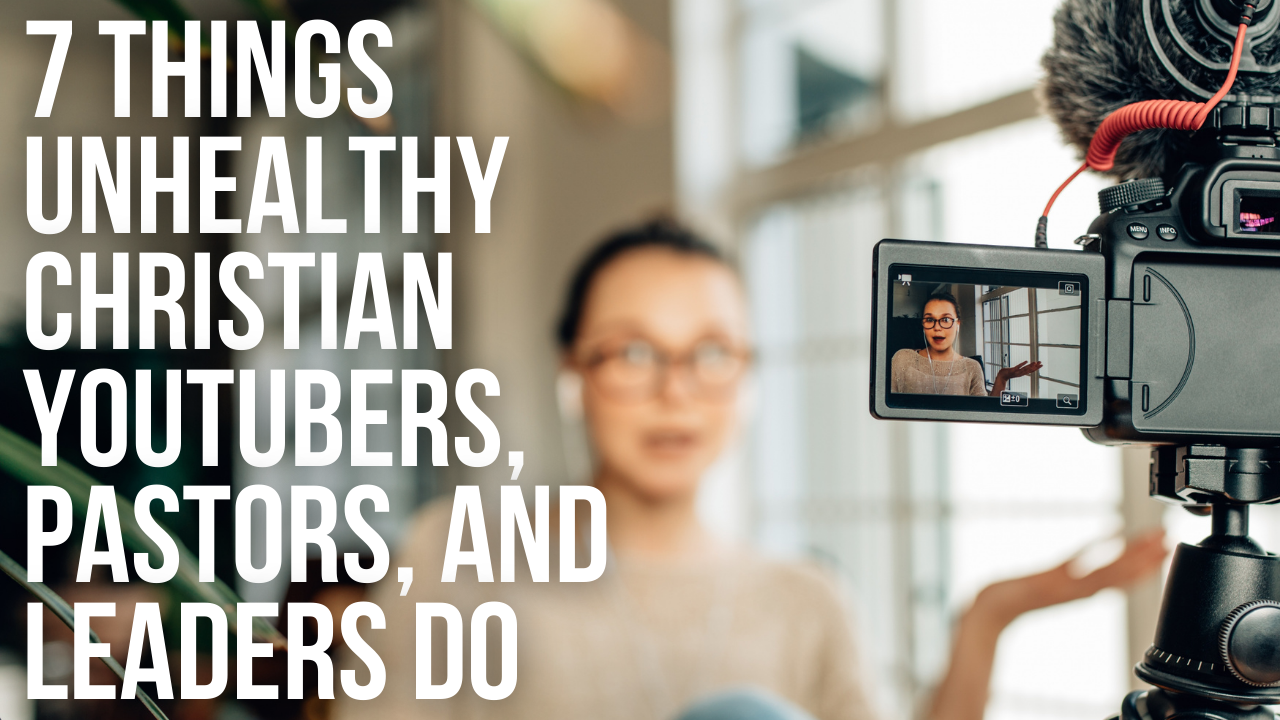 How can you avoid being misled by an unhealthy YouTuber, pastor, or leader? Here are 7 things to watch out for.

1. They Blame Their Audience When They Don’t Have What They Want

Have you ever been watching a sermon and then the pastor chastises his church for not clapping enough? I’ve personally heard pastors say things like:

There’s nothing wrong with asking your audience to like your video or subscribe to your channel. There’s nothing immoral about asking your congregation to clap when they agree with your point so you know if they are tracking along. And there’s nothing wrong with being a leader of a Christian organization and asking your employees, financial supporters, or the community around you to contribute to your cause so you can keep doing the good you want to do. But unhealthy leaders begin to blame others when they do not reach the goals they feel they should be reaching.

Instead of blaming others for not having what they want, a healthy leader seeks wisdom from the Lord to form healthy goals and create wise plans to reach those goals. Blaming the audience, the congregation, or the donors for not having what you want is a form of entitlement and it’s not healthy.

As Jesus said in Mark 10:45, “For even the Son of Man came not to be served but to serve, and to give his life as a ransom for many.”

2. They Use Other People’s Tragedies for Their Gain

I also think there is a time and place to talk about other people’s tragedies if you can do so in a way that lifts others up and brings God glory. Paul often talked about the trials others were going through (Philippians 2:25-30) because it can be helpful to publicly talk about other people’s trials as a testimony to the faithfulness of God (2 Thessalonians 1:4, 1 Thessalonians 1:6-10, Acts 17:11).

But this is a slippery slope. Publicly calling out others who you disagree with or talking about other people’s trials can quickly turn into unfruitful arguing and gossip (Proverbs 20:19 Proverbs 26:20, Proverbs 18:8, 2 Timothy 2:23-26). Ask the Lord to give you discernment when you listen to YouTubers, podcasts, pastors, and other Christian leaders so you can surround yourself with people who are seeking to obey Ephesians 4:29, “Let no corrupting talk come out of your mouths, but only such as is good for building up, as fits the occasion, that it may give grace to those who hear.”

3. They Focus on the Process Their Accusers Took Rather than Just Refuting Their Claims

Whenever some scandal breaks out in a church, the pattern is often very predictable. Sadly, when an unhealthy leader is accused of doing something wrong, this leader muddies the waters by diverting everyone’s attention away from the claims being made and towards the process in which the accusers took.

I can’t tell you how often I have seen Matthew 18:15-20 used by unhealthy leaders as a way of misdirecting unwanted attention away from themselves and back onto the accusers. They say, “Well these people didn’t even come to me about their accusations. They just went public. This proves they are not telling the truth because Matthew 18 states they are to come to me first.” This is a big misapplication of Scripture. First off, Matthew 18:15-20 is clearly a passage of Scripture giving counsel about personal sins between two Christians. It states right in verse 15, “If your brother sins against you . . .” (For more on this, you can read my article, 3 Ways to Misuse Matthew 18:15-20).

If my pastor sinfully offends me personally, I’m to go to him directly. If my pastor is stealing money from the church, cheating on his wife, or abusing other people, these are not direct sins against me. Rather, these are corporate sins against many people. A much more relevant verse for these types of issues is 1 Timothy 5:19-21 (NIV), which states:

Do not entertain an accusation against an elder unless it is brought by two or three witnesses. But those elders who are sinning you are to reprove before everyone, so that the others may take warning. I charge you, in the sight of God and Christ Jesus and the elect angels, to keep these instructions without partiality, and to do nothing out of favoritism.”

False accusations should not be allowed to ruin an innocent person’s character and reputation, thus we should be careful to verify the truthfulness of the accusations. But Christians also need to be careful they are not showing partiality to their favorite pastor or Christian leader by refusing to investigate accusations against an elder that need to be investigated. The church is commanded to publicly rebuke a pastor who is abusing his pastoral role.

The fact is, when someone has nothing to hide, they just tell the truth, refute the false claims, and provide any evidence they can to justify their defense. But when an unhealthy leader is accused, they divert the attention away from themselves by complaining about the process that they were accused with (Acts 5:28).

4. They Attack Their Enemies Character Rather than Logically Defeating Their Arguments

As Proverbs 9:7 states, “Whoever corrects a scoffer gets himself abuse, and he who reproves a wicked man incurs injury.” It’s fine if they don’t agree with the correction. No one should accept false accusations. Everyone should have the right to defend themselves. But if someone in power is trying to injure those who are correcting them, that’s a sign of an unhealthy leader.

It’s not wrong for Christian content creators to focus on a particular topic or niche. While I believe a church should preach expositionally through the Bible, meaning they are going through books in the Bible verse by verse, because the churches job is to equip the saints with the whole counsel of God (2 Timothy 3:16-17), it’s not wrong for parachurch ministries to have a less expansive scope. It’s not biblical to equate a church and a YouTube channel as the same thing. They are to be held to different standards when it comes to the demand to expositionally preach.

For example, over the years I’ve narrowed in on Christians singles who desire biblical relationship advice. Dave Ramsey has narrowed in on offering wise financial advice. Pastors who preach through the Bible expositionally on Sundays often write books about specific topics for the general public outside of their church. Having certain people focus on certain topics should be seen as an aid to the church, not a hindrance.

However, whether it be a church, YouTuber, podcaster, or some other teacher, it should be a red flag when you never hear this person talk about sin. Some people talk about sin more often than others, which is fine. But a Christian who is claiming to teach biblical ideas and principles can never avoid talking about sin forever if they are being authentic.

Sometimes bad teaching is not about what is being said but more so about what is not being said. The prosperity gospel movement is notorious for avoiding the topic of sin. While we should not beat people down or shame them for sin, as Christians we must talk about the bad news at times if we are truly proclaiming the Good News. Jesus died on the cross for our sins. Jesus was raised from the dead so we can be free from sin and death (See Romans 6).

Someone who only talks about health, wealth, and prosperity is unhealthy.

6. They Make Wild Predictions About the Future and Focus on Supernatural Signs and Wonders in Unbiblical Ways

If you’ve been watching this channel for a while, you know that I often use certain titles that say things like “5 Signs God Is . . ” or “3 Things God Will Do When . . .” or “When THIS Happens, It Means God Is . . .” But as I’ve discussed in numerous videos and articles, I’m not proclaiming or prophesying anything over you. Rather, I’m pointing out tangible, observable evidence that we can see in our lives so we can then wisely apply biblical principles so we can honor the Lord.

When I use the word “signs” I’m not talking about prophetic, supernatural signs, as Jesus warned us not to look for these types of signs (Matthew 16:4). Rather, I’m talking about a different type of sign that simply means “the evidence for what God wants you to do.” I believe God is always sending us evidence or “signs” that we must interpret through a biblical lens so we can obey Christ. For example, if someone is an unbeliever, this is a “sign” God does not want you to marry them because this is evidence that marrying them would violate 2 Corinthians 6:14 and 1 Corinthians 7:39. For more on this, you can read my article, What Does the Bible Say About Signs from God?

Sadly, however, over the years many new channels have popped up and have taken the general structure of my titles, but then proceeded to proclaim things over the viewers or claim a prophetic, supernatural sign will appear. This is not what I do and I think we should all be on guard against anyone who claims they know what God is going to do your life.

1 Thessalonians 5:19-22 states, “Do not quench the Spirit. Do not despise prophecies, but test everything; hold fast what is good. Abstain from every form of evil.” So yes, let’s not be disrespectful to someone who claims to be prophesying, but let’s also not fall for content that is simply a Christian version of the same old tricks “psychics” try to use once you pay them to look into their crystal ball, “I’m sensing God is doing this . . .” or “I’m sending God is doing that . . .” or “I’m sensing someone watching this is about to experience . . . .” That’s not the behavior of a good Bible teacher or someone with pure intentions.

As 1 Timothy 1:6-7 states, “Certain persons, by swerving from these, have wandered away into vain discussion, desiring to be teachers of the law, without understanding either what they are saying or the things about which they make confident assertions.”

7. They Try to Replace Jesus as the One Mediator Between God and Man

God has certainly blessed his people with varying gifts meant to be used for the benefit of others and for the glory of God (1 Peter 4:10-11).

But if our gifting is being used to steal God’s glory, this is unhealthy. This is one of my issues with some who claim to have a “deliverance ministry.” Jesus alone is the Savior we need. If anyone is trying to make you believe they are the only person who can help you, this is an unhealthy person. As 1 Timothy 2:5-7 states:

For there is one God, and there is one mediator between God and men, the man Christ Jesus, who gave himself as a ransom for all, which is the testimony given at the proper time. For this I was appointed a preacher and an apostle (I am telling the truth, I am not lying), a teacher of the Gentiles in faith and truth.”

Just as Paul was appointed to point to Jesus, so too is every healthy Christian YouTuber, pastor, or leader. When anyone begins to point to themselves as the solution to your problem, this is a sign of an unhealthy person.

Do you know how to identify a cult leader? Here’s an article called, 13 Weird and Dangerous Things Cult Leaders Say.