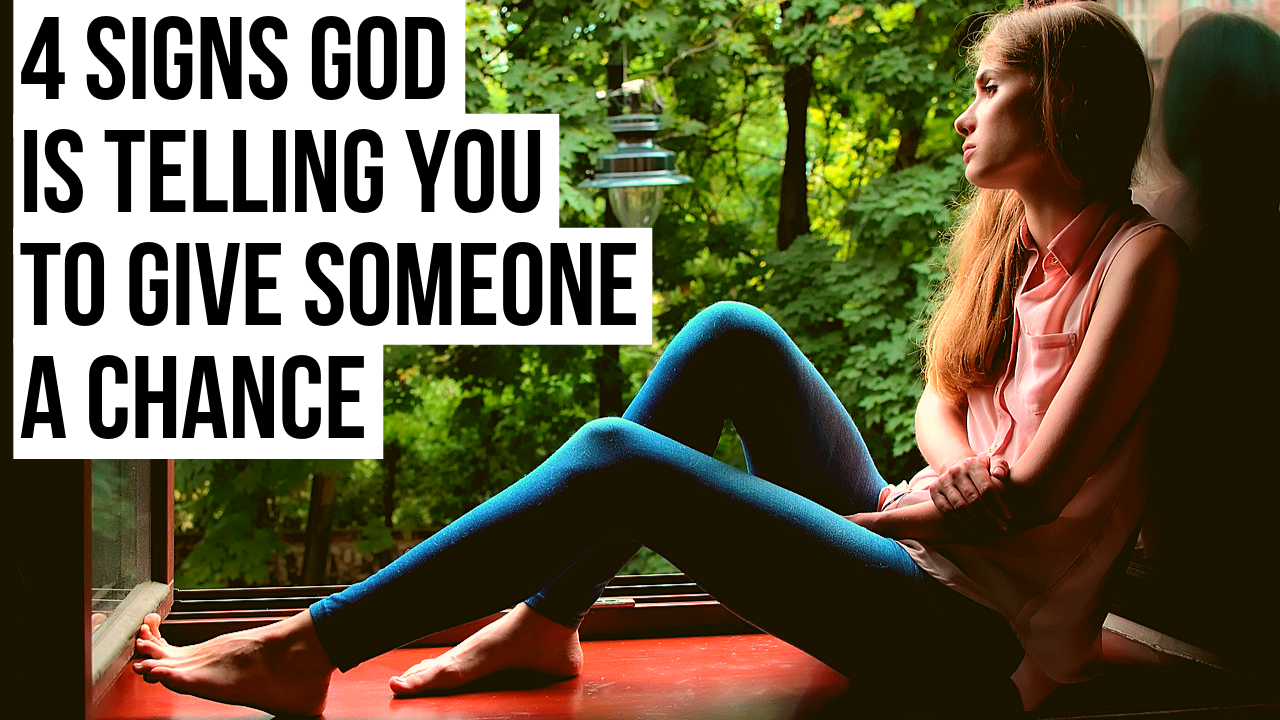 Here are 4 signs that might mean God is telling you to give someone a chance.

1. If You Are Unsure if You Like Someone and You Are in a Season Where You Are Prepared to Date, God Could Be Telling You to Give Them a Chance

In an effort to avoid getting hurt, Christians often shut down relationship opportunities very quickly when they are unsure if God does or does not want them to move forward. Oftentimes when a Christian is confused and kind of stressing out because they are just so unclear about what they should or should not do early on with a relationship opportunity, their default position is to just shut it down and play it safe.

While I am in no way advocating that people move forward in relationships when they sense God is saying, “No,” I do believe that it is wise to operate in the unknown for longer than many Christian singles are willing to do. No one likes confusion, so I understand the desire to make a quick decision just to have clarity one way or the other. But life is messy, and sometimes God would prefer us to rest in him more rather than seeking to make everything so clear right away.

2. If Someone Has the Biblical Characteristics of a Godly Husband or Wife But You Are Finding It Difficult to Connect with Them Right Away, God Could Be Leading You to Give Them More Time

Point 1 should not be applied if you are being tempted to sin or if the person you are interested in does not have the biblical qualities of a husband or wife. You can read passages like Ephesians 5:22-33 and 1 Peter 3:1-7 to see what a Christian marriage should look like. So if you are in a situation where you know this person is not biblically mature enough to be a godly spouse, you don’t need to give this person a chance because you already have a biblical answer that God would not want you to date or marry someone who will lead you into sin intentionally.

Sometimes, however, Christian singles meet someone that checks all the biblical boxes for a godly spouse but there is not an instant romantic or personal connection with this person. Checking the biblical boxes is where you have to start, but it’s not enough. So I am certainly not saying to deny your feelings and just marry someone who has great character even though you don’t really have strong feelings for him or her.

What I am saying is that if you see great potential in someone but you are finding it difficult to connect with them personally, I would just give it some time to make sure your feelings for one another don’t grow over time. We often have preconceived ideas of how our future husband or wife will come into our lives. No one imagines meeting their future spouse and not liking them that much at first. But sometimes it does happen this way. Two people don’t always have instant chemistry. Sometimes one of them might be a little more socially awkward or immature so it can take longer for that person to open up and relax enough to show their true self.

In short, God could be telling you to give someone more time before ending it with them if they have great characteristics but you just have not personally connected with them yet. It is possible that you just need more time to get to know one another before those feelings begin to build.

3. If You Truly Like Them as a Friend But They Like You as More Than a Friend, God Could Be Telling You to Give Them a Chance

Even though friendships between single men and women are often more complicated, I believe they are essential for Christian singles for a variety of reasons. For one, through friendships you meet other Christians singles, which is an essential part of the equation of meeting the one God has for you. If you don’t have friends, it will be unlikely that you meet other Christian singles in social settings thus minimizing your relationship opportunities.

Another reason I believe friendships with the opposite sex are important for Christian singles is that oftentimes a romance is built out of a friendship. While many Christian singles try to avoid this from happening, in reality this is good and often should happen. Man and woman friendships are not built to last. Once they get married to someone, their friendships with other people from the opposite sex are going to change anyways. Therefore, Christians singles, in my opinion, who are friends should be open to dating one another if they feel led because those friendships will not last anyways. I don’t think you should try to date all your friends from the opposite sex, but if there is a connection I think it is worth the risk to give it a shot.

One common problem, however, in a scenario like I am talking about is that oftentimes one friend likes the other but the other person is not interested in dating. If you really, really can’t see yourself dating one of your friends that likes you, then certainly don’t force it. If it’s not meant to be it’s not meant to be. But I do think that it is wise to at least give this person a chance if you truly do have a great friendship with this person.

There’s a reason you two are friends. There’s something about one another that you enjoy. Perhaps your connection is not meant to go past friendship. That’s totally fine, but you should also recognize that if one of your friends does open up and express that they like you as more than a friend, you should know the friendship will never be the same at this point anyway. Since the friendship is going to change now that this person has crossed over that line, it might be worth the risk to at least give him or her a chance to see if your romantic feelings might grow.

Friendship is a great foundation to romance, so you never know what might happen if you give them a chance. This point is more of my opinion rather than me applying a specific biblical truth, so certainly pray about it and obey whatever God is leading you to do personally.

4. If You Truly Enjoy This Person’s Company But You Are Not Overly Attracted to Him or Her, God Could Be Telling You to Give Them a Chance

How important is physical attraction in a Christian relationship? As Christians, I do believe that we should not value attraction as much as the world values it as 1 Peter 3:3-5 explains. Sadly our culture has elevated sex and attraction to a place that God never intended. With that said, we also do not want to throw out the baby with the bath water so to speak. God is the one who made sexual attraction between a husband and wife.

Physical attraction is not anywhere near the top of the list for the most important elements to a deeply satisfying and enjoyable marriage. Two people can be really attracted to one another in dating and then get married and be totally miserable together if they lack the Christian maturity that is required to honor God in marriage.

While it is not at the top of the list of importance, I do believe physical attraction should still be on the list of importance. If you are truly not attracted to someone at all and this is not changing, then it is highly unlikely that God is calling you to be with this person. However, attraction can be a funny thing. Oftentimes is grows the more you get to know someone. When your emotional connection grows stronger with someone, oftentimes your body reacts by feeling more attracted to him or her.

So if you like someone and you truly enjoy their company but you are not that attracted to him or her, God could be telling you to give them a chance just to see if your attraction grows as your feelings increase as well.