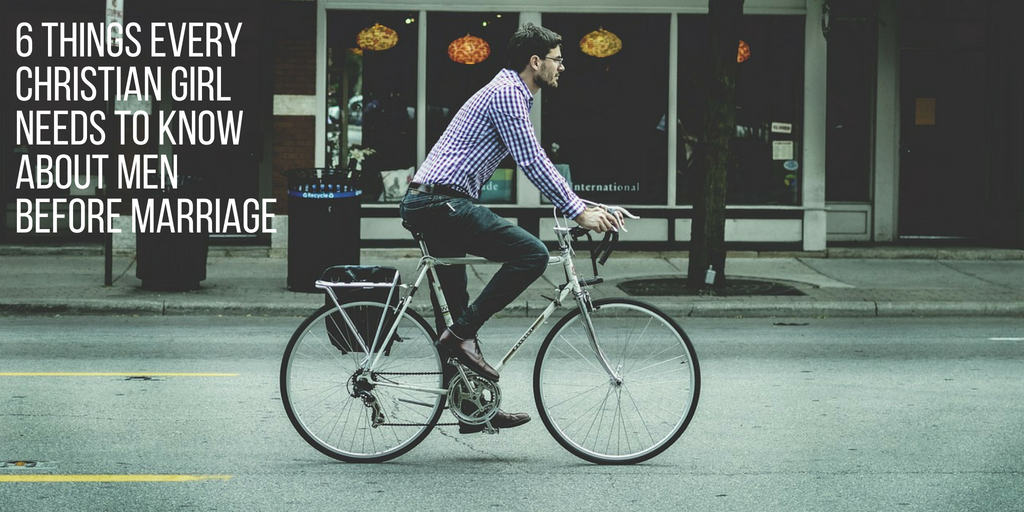 If you are a Christian single woman who wants a healthy marriage one day, what do you need to know about men? What will make your husband’s heart tick? What will he find offensive? What will he need from you?

Obviously every man is different, but here are 6 things I believe every Christian girl needs to know about men before getting married to her husband.

1.Men Are Different Than Women

The reality is that within American culture, there is a raging debate on gender. While I’m not here to engage with that debate right now, I do believe you will be doing yourself a great disservice if you enter into your marriage believing that men and woman are essentially the same.

All humans, whether man, woman, or child certainly have some common needs within their hearts: Love, community, safety, respect, and identity. However, the way the core human needs are expressed in men and women are usually different. Of course every man is different than other men and the same goes for women. However, in general men have unique differences compared to women.

For the sake of time I will not get into the specifics of these differences, but I do believe that if a woman enters marriage thinking her husband will think, act, and feel the way she does, she will be confused and offended by his behavior. So just remember, your future husband will have different needs than you because men and women really are different.

All humans need respect. Generally speaking, however, the way a man craves respect is much more intense that in the way a woman craves respect.  I don’t think it was an accident when Paul specifically used these words in Ephesians 5:33, “Let each one of you love his wife as himself, and let the wife see that she respects her husband.”

If a man is not liked by people, gossiped about, or if someone tells him he’s ugly, most likely he will be offended just like any other human would be. But when a man feels like someone is using authority over him in an unjust way, his level of offense will be at an all-time high. If he feels like someone is stripping him of his strength or trying to control him in a disrespectful way, his level of frustration will not be at the same level as when he is wronged in other ways.

Likewise, if you complement a man’s appearance, if you laugh at his jokes, of if he feels very accepted by others, this will make him feel good just like all humans would feel. However, when a man feels like other people respect him, he will feel better than at any other point.

3. Men Want to Be Good Providers for Their Families

One of the core characteristics of a godly husband is provision. Every man wants to be a good provider. Not all men care about having lots of friends. Not all men want to be leaders in the church. And not all men desire a lavish life-style. But all Christian husbands want to be good providers for their families.

“In the same way husbands should love their wives as their own bodies. He who loves his wife loves himself. For no one ever hated his own flesh, but nourishes and cherishes it, just as Christ does the church . . .” (Ephesians 5:28-29)

A man’s worse fear is to have a wife and kids and not be able to provide for them. The reason this is important for a woman to know this is because his career is not just a career to him. Generally speaking, I believe men and women view their work differently. When a man does not have a job, something slowly dies in him. He was designed by God to work and to provide for his family.

Therefore, a woman should know that this area of his life could be a sensitive subject at times. If he is not making as much money as he would like and his wife criticizes him for this, he will be deeply offended. If his wife is always discontent with what they do not have and can never enjoy what they do have, this will wear a man out.

4. Sex Is Important to a Husband’s Emotional Stability

The reason a husband generally craves sex more than his wife is because of what he receives through the sexual encounter they share together. While most people believe sex is just about sex for men, the reality is that sex makes a man feel loved in a deeper way than I think it does for women. If a husband does not have sex with his wife for a week or two, I believe he will feel more emotionally empty by this compared to his wife.

In short, I believe Christian women should know that sex is important to a husband’s emotional stability and to him feeling loved. If a man does not have sex with his wife, he will feel disconnected and unloved by her. Many women think this is shallow, but it’s not. This is how God made a man. From what I’ve heard from the female’s perspective, this is how they would feel when a husband is not communicating with the wife. Generally speaking, a man needs sex like a woman needs conversation.

5. A Man Does Not Naturally Understand a Woman

While both genders struggle to understand each other, I think it is safe to say that in general, women understand men better than men understand women. I think it’s because women generally are better at relationships and communication. While most boys were outside beating each other with sticks, most girls were inside role playing or having much more mature conversation with their friends. From an early age, women have more relationship training in general than men.

The reason it is important for a woman to know that a man does not naturally understand her is because she will interpret his ignorance as being intentionally unloving. A good man will not naturally understand a woman and he will make a lot of mistakes in his attempt to love her. But a good man will be willing to learn if a woman is willing to teach him.

So just know that when you get married, your husband will need your help to understand you and your needs.

6. A Man’s Heart Dies When He’s Domesticated. He Needs Some Form of Meaningful Adventure in His Life

Every man is different, but every man needs some form of meaningful adventure in his life. A man who is not a part of something bigger than himself slowly dies inside. When a man lives an overly domesticated life, meaning his world revolves around safety and comfort, he loses something core to his being.

I believe the reason so many men become angry, bitter, and annoyed the older they get is because their lives keep growing more and more insignificant. The term “angry old man” exists for a reason.

This is important to know as a woman so you choose to marry a man who is choosing to live for a higher purpose. When you get married, you must encourage him to serve others and link arms with other men who are also on a similar mission as him. You must sacrifice some of your time with your husband so your husband can spend time being involved in a meaningful adventure that is glorifying to God.