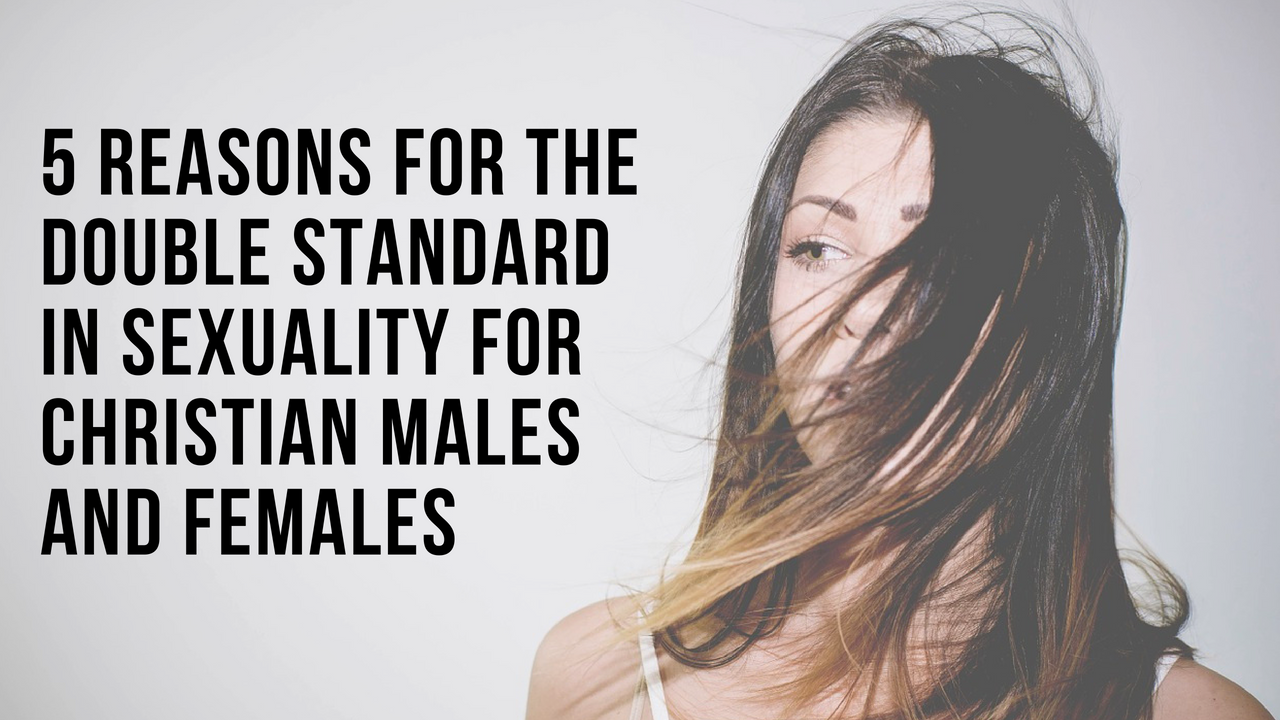 Before we can talk about why there is a double standard in sexuality among Christians for males and females, we first need to define what that double standard actually is. The double standard for males and females is when a man and woman commit sexual sin but that sexual sin is held against the woman in a more severe and longer lasting way. Christians often do not look down on men as much when they are not virgins like they do to women. Also, a virgin Christian woman is celebrated more than a virgin man. In summary, a woman’s virginity and sexual history is judged much more seriously than a man’s virginity and sexual history.

Here are 5 reasons there is a double standard between Christian males and females regarding sex outside of marriage.

I think the main reason there is a double standard in sexuality for Christian males and females is because males are the ones who idolize sex most. Certainly some women idolize sex, but I think it’s clear that more men on average idolize sex than women.

Because many men believe sex is the secret treasure box to everlasting happiness, they also believe to unlock this treasure they need a perfectly pure virgin. Since not as many women believe sex with a man is what will make them deeply happy for the rest of their lives, they do not value a man’s virginity as high as men value a woman’s virginity.

I’m not saying that Christian women don’t value a man’s virginity. I’m just saying they value it in a more appropriate way than men do. Most women do not view a man through the lens of virginity like many men do to women. Because many men have idolized sex and made it their god, they place an overabundance of value on virginity. Obviously being a virgin is a good thing. But being a virgin does not mean you are pure in Christ and that you will be a great Christian spouse.

There is not one biblical command about sexual sin that applies to women and not men. For example, 1 Corinthians 6:18 states, “Flee from sexual immorality. Every other sin a person commits is outside the body, but the sexually immoral person sins against his own body.” Notice this Bible verse says “person” and not “woman.”

While this is what the Bible says, this is often not what preachers teach, especially youth pastors. Many times when a pastor or youth pastor teaches on sexual purity and virginity, it seems like the focus is directed more at young ladies than it is at young men.

While this is certainly the fault of the pastor and church leadership for allowing this unbalanced teaching to occur, I believe the church as a whole must be held responsible for not confronting this double standard in preaching. Until those in the congregation start challenging unbiblical teaching, these bad sermons that promote double standards in sexuality for males and females will continue.

(For more on this read/watch Save Yourself for Marriage: 5 Lies About Sexual Purity Many Christians Believe.)

3. There’s a Double Standard Because Common Christian Dating Advice Gives All the Power to Men When Initiating a Relationship

While I believe the Bible clearly states that a husband should lead his wife, I also know for a fact the Bible does not say a man should pursue a woman in dating. The reason I know it doesn’t say that is because Christian dating is never mentioned in the Scriptures.

With that said, I believe a Christian man should pursue a Christian woman because this is good evidence that he will be a good leader in marriage. However, I also believe that Christians have way over applied the biblical roles of husbands and wives and extended those roles into dating. Dating is totally different than marriage and therefore I believe it is a misapplication of Scripture to directly apply marriage truths to dating.

In short, I believe women can be way more proactive than many of them have been taught. I would not go as far to say that a woman should pursue a man, but I do not believe Christian women should feel like they must just wait on the auction stage hoping a male will finally purchase them. In other words, I don’t believe a woman must just wait to be pursued and that men should hold all the power in initiating everything.

The reason I’m bringing that up in this article is that when we give all the leverage to men in starting relationships in dating, they are the ones who get to be overly choosy and critical of the other gender. By men having sole responsibility for initiating relationships, they are more likely to have a higher view of themselves and a lower view of women.

Men are also more likely to feel like they have the upper hand because generally there are far more eligible Christian women compared to eligible Christian men. Because of this it seems at times women have more pressure to be seen as perfect so they will be chosen by a man rather than a woman feeling like she is choosing a man just as equally as she is being chosen.

When women are empowered to be more proactive in the early phases of dating, I believe this will help more men stay accountable and realistic about their own imperfections.

(For more on this you can read/watch Should a Christian Girl Pursue a Man?)

4. Because Christian Women Are Not Correcting Their Brothers Who Have a Double Standard

In the secular culture, this double standard in sexuality for males and females has been felt as well. However, the world’s way of correcting this double standard is to encourage women to live sexually sinful lives just as the men are doing. The world says everyone should be free to have sex with whoever they want without any type of consequences.

For Christians, however, the solution must not be to lower the moral standard for women so they can get away with sexual sin like men. Rather, the church, including the women in the church, need to hold the Christian men to a higher standard and expect more of them. Neither gender should idolize the virginity of the other, but if women want the double standard to stop, they need to hold the men in their lives more accountable for their actions.

Christian women should obviously continue to honor Christ with their bodies without idolizing virginity or thinking that they have a greater worth because of their own works. That is anti-gospel. All of our worth and purity is based in the free grace of Jesus Christ, not in what we did or did not do (Ephesians 2:8-9). However, they should also look for men who are ready to honor Christ with their bodies as well.

Lastly, there is a double standard in sexuality for Christian males and females because men are not calling out other men who are doing this.

If we as men see other men treating women in a way that these men do not treat themselves, we should lovingly correct our brothers who are sinning in this way:

Brothers, if anyone is caught in any transgression, you who are spiritual should restore him in a spirit of gentleness. Keep watch on yourself, lest you too be tempted.” (Galatians 6:1)