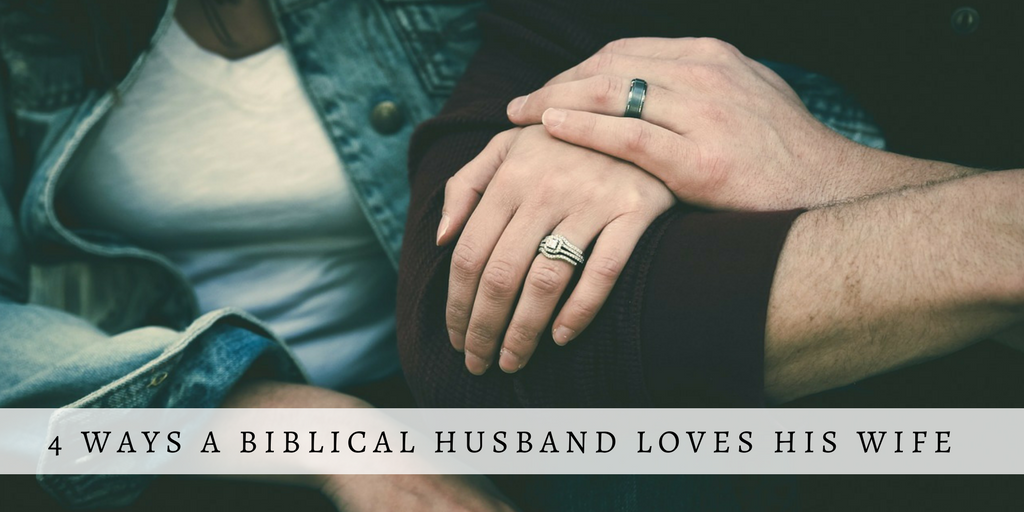 How can a Christian husband be the spiritual leading in the marriage? What does it mean for a husband to fulfill his role in the marriage with his wife? What is a “good husband” according to the Bible?

One place to discover what the Bible actually says about the specific role of the husband in a marriage is Ephesians 5:22-33. Certainly the qualities listed here are helpful to Christians in general, but if a husband is not offering these expressions of love to his wife, he is to not fulfilling his role according to the Bible.

So here are 4 ways a Christian husband is called to love his wife.

A Christian Husband Loves His Wife Through Leadership

I am intentionally not saying that these are 4 ways to “lead” his wife because I believe his leadership is the way he is called to love. Love is the underlying motivation for what a husband is called to do for his wife. His main job is not to lead her. His main job is to love her, and one of the ways he loves her is by leading her.

A wife is called to “submit” and her husband is called to lead. The reason that sounds so offensive to so many is because they are substituting their own definition for these words rather than God’s intended meaning. The world can’t stand the idea of a husband “leading” his wife because they are using a worldly definition for leadership. But notice in Mark 10:42-45 what Jesus says about biblical leadership:

And Jesus called them to him and said to them, “You know that those who are considered rulers of the Gentiles lord it over them, and their great ones exercise authority over them. 43 But it shall not be so among you. But whoever would be great among you must be your servant, 44 and whoever would be first among you must be slave of all. 45 For even the Son of Man came not to be served but to serve, and to give his life as a ransom for many.”

When God tells a wife to submit to her husband and a husband to lead his wife, this is the context. You should be offended if you think God tells us husbands to lord their authority over their wives. But God does not say that! By studying the life and words of Jesus, we can see that Christian leadership uses authority to serve and sacrifice for the wellbeing of those being led. That’s how a Christian husband is called to lead his wife. Ephesians 5:25 state, “Husbands, love your wives, as Christ loved the church and gave himself up for her.” How did Jesus love the church? By dying for her. Likewise, as Christ leads the church through sacrificial love, so all Christian husbands should lead their wives.

A Christian leader is the person who takes the primary responsibility for the wellbeing of those he leads. Leadership is not about telling someone what to do. Christian leadership is about helping those you lead to live the right way and making sure they have everything they need to accomplish the goals they have to glorify God.

When the church submits to Jesus, it doesn’t mean she is degrading herself to his iron-fisted rule. She submits by allowing herself to be served by him and by following his leadership. How can Jesus sacrificially lead his church if she will not submit and follow him? This is also the context for a Christian husband leading his wife.

(For more on this, see Complementarianism in Context)

A Christian Husband Fulfills His Role in Marriage Through Protection

By nature, whether you are a Christian or not, you know that it is a man’s job to protect those more vulnerable than him. Of course women are capable of protecting themselves, but it’s also a clear fact that God has biologically created men to generally be physically stronger than women. Certainly some women are stronger than some men, but on average men are stronger.

God gave a man his strength not to abuse women but to protect women. I believe abuse is terrible whether a man is abusing a woman or a woman is abusing a man. However, I do believe there is generally more outrage and outcry when a man abuses a woman or child rather than when the opposite occurs because human’s inherently know that this is an extreme violation of what God intended for the stronger male. When a man abuses a woman or a child with the strength God has given him, it sickens us to our core because this is a direct violation against God’s design. He intended a man’s strength to be used for a woman’s protection, not her abuse.

The spiritual leader is also the first one willing to go to battle when there is a spiritual fight against his family (Ephesians 6:11-12). Ephesians 5:29, “For no one ever hated his own flesh, but nourishes and cherishes it, just as Christ does the church.” A husband loves his wife by protecting her to the best of his ability in every way he is able.

Another way a Christian husband leads and loves his wife in the marriage is by providing for her. This does not mean that he must always make more money, that a woman cannot work, and that he must be the sole person in charge of the finances. A Christian man is not the hoarder and the giver of the gifts. Rather, he has made it his personal responsibility to make sure his wife and family have what they need.

Barring some disability or abnormal situation, a Christian man should have a full-time job and provide the necessary resources for healthy living. He does not need to make a lot of money to be a good Christian husband. However, he does need to make money. His paycheck is not the scoreboard for his life or his love. But if he cannot hold a job and does not ensure that his family has the basic needs, he is not fulfilling is Christian role for a husband. Ephesians 5:29, “For no one ever hated his own flesh, but nourishes and cherishes it, just as Christ does the church.”

In cases where a single man cannot work and cannot make any money, I think marriage is usually not the best option unless there are unique circumstances that ensure he and his wife will not be a burden to others. If a man is married and then gets disabled and cannot work, he should still, to the best of his ability, take responsibility for the provision of his family through being involved in the finances in the ways he can. His wife may need to work, but a godly man will still shoulder the responsibility in the ways he is able to.

A Christian Husband Loves His Wife in Marriage By Prioritizing Her

A godly Christian husband loves his wife and leads her by never leaving or forsaking her. She and he are one while they are on this earth. A husband and wife are unique individuals with their own thoughts and beliefs but they are also joined in a special way that only a husband and wife can be united.

This mystery is profound, and I am saying that it refers to Christ and the church. 33 However, let each one of you love his wife as himself, and let the wife see that she respects her husband.