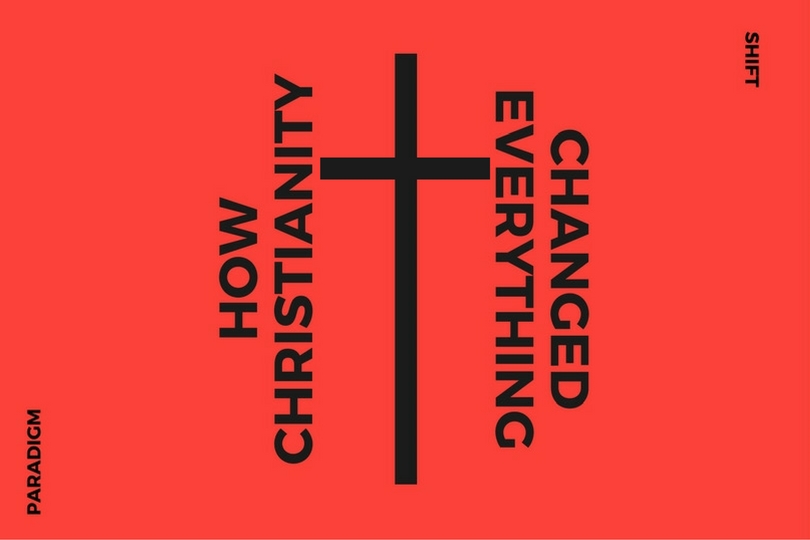 Have you ever taken hold of an idea that completely changes the way you view the world?

A paradigm is one’s theoretical views or beliefs that create one’s perceptions of the world, shaping the way one thinks and lives. A “paradigm shift” happens when a new idea or viewpoint changes the old way of seeing.

For example, people use to believe the earth was flat. This belief shaped the way they lived because they feared they would fall off the face of the planet if they traveled too far. This was their paradigm.

However, once the truth was revealed that the earth was round, a paradigm shift happened in the minds of men. It changed everything.

Christianity Is the Greatest Paradigm Shift Ever

When someone embraces the gospel and becomes a Christian, the scales fall and suddenly they can see the same old world in a brand new way. Only a relationship with Jesus Christ can cause this shift.

Christianity is the greatest paradigm shift ever because it totally transforms the way we can relate to God. Jesus, fully God, came to earth to have intimate relationships with people. When asked what the greatest commandment was, Jesus said it was to love God (Matthew 22:37).

This is so opposite of the religious lifestyle so many of us have been trapped under, thinking religious activity was the thing God was mostly offering. Religion says the goal of life is to be moral, to be pure, to be devoted, and to be a loving person. Not bad things if you are a goal oriented person.

But the paradigm shift comes when you start seeing that God is offering a relational invitation, not religious goals.

Christianity Is a Paradigm Shift Because It Replaces Rules with Relationship

All religions, except Christianity, form a paradigm where life becomes an act of becoming a better and better person through the rules of that specific religion. Christianity, however, creates a totally different way to view life. Jesus Christ is the greatest paradigm shift that has or ever will exist. He takes religion and turns it on its head.

Christianity shifts the goals of a human from following rules to become a better person, to following a person (Jesus) who then gives you the power to joyfully live by the rules.

Religions are about self-improvement through personal effort. Christianity shifts all that because it is about receiving power from God which enables us to love him through a righteous life.

Religion offers a contractual love where you must do certain things to get God’s love. In Christianity Jesus offers love not based on who we are or what we’ve done but on who he is and what he’s done for us (2 Corinthians 5:21).

Christianity starts at the other end of the line compared to all religions. In religions, you work to become perfect. In Christianity, Jesus makes you perfect, and then you spend the rest of your life learning how to work for him (Hebrews 10:14).

Having a religious paradigm shaping your view of reality is like living as though the world were two-dimensional when actually it is three-dimensional, just waiting to be enjoyed and explored in a much fuller way.

To live in a false religious paradigm based on personal effort and self-improvement will cause you to live a fearful life. It will cause you not to venture too far, fearing you might fall of the cliff because you know how unable you are to appease God.