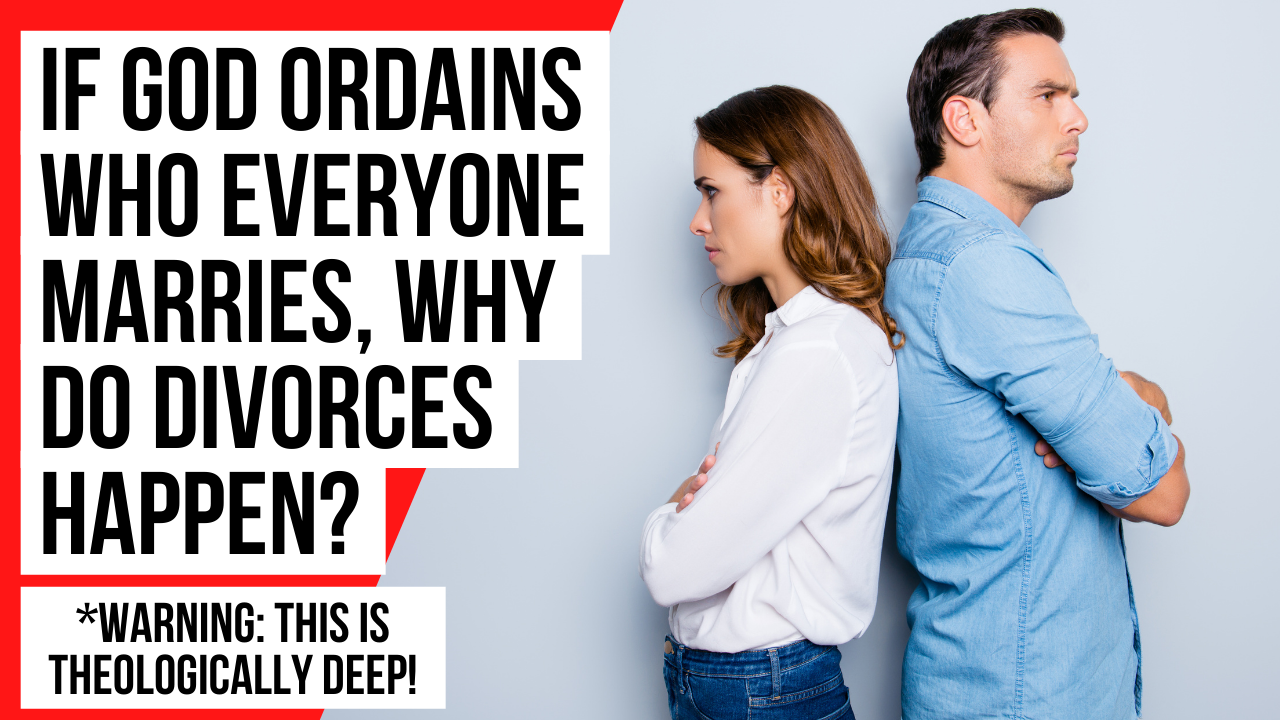 If you’ve been following this ministry for a while, you know that I believe in the concept of “the one.” One follow up question I often get goes something like this, “If God sovereignly puts people together in marriage, why do divorces happen? If God plans who we marry, why do some marriages turn out so badly?”

These types of questions are difficult to answer because they touch on a lot of different theological themes that overlap, so there are layers to the answer for this type of question. Some of those layers I’ve already addressed in previous articles which you can review here:

What Does the Bible Say About “The One”?

Can You Miss God’s Will for Your Life and Relationships?

Does God’s Will Always Happen in Relationships?

But in this article, I want to expand on one angle that I haven’t talked much about before which revolves around God’s sovereignty over sin even though God is not the one who causes sin.

All I mean by “the one” is “the person God has planned for you to marry.” By “the one” I’m not referring to God’s promise to put you with the perfect one or your other half, like a soul mate (a concept I don’t believe in). I’m not saying that there is someone for everyone. All I mean by “the one” is that God is the one who will put you with who he wants. The fact that God plans who you will marry is not a promise that your marriage will be perfect because God uses and works through our imperfect choices to bring about what he wants in the end.

As I will explain further in a moment, divorce is not possible without some sort of sin in the equation. And all sin comes from the human heart (James 1:14-15). So either both people are sinning or at least one person in the marriage is sinning if a divorce occurs.

But how does God’s sovereign will include sin?

I bring this up because I do believe God sovereignly ordains who you marry but he takes into account the choices we make in our lives as we disobey or obey his commands in the Bible. God’s sovereign will and prescribed will intersect constantly. While God will never sovereignly force someone to sin, he does sovereignly direct the outcomes of sinful choices.

Never in the Bible does God take a righteous, obedient person and then make them do evil. But God does take people who were already choosing to sin and then he directs them to sin in specific ways to create the specific outcomes that he wants.

Or when David counted the peope, it’s important to notice that God was already upset with Israel (which includes David himself) and then caused this specific outcome to their free choices to rebel against him. 2 Samuel 24:1 says, “Again the anger of the Lord was kindled against Israel, and he incited David against them, saying, ‘Go, number Israel and Judah.’” 1 Chronicles 21:1 also says, “Then Satan stood against Israel and incited David to number Israel.” These verses seem contradictory. Was it God or Satan who incited David to sin? And if it was God, doesn’t that contradict James 1:13 which states that God cannot tempt anyone to sin?

When you understand that God does not cause sin but he still has the power to direct people who are already choosing to sin, then you can see how God arranged for this specific sin to occur by using Satan and the sins of those involved.  Again, no one is ever living a righteous life and then God comes in and sovereignly ordains that they choose a sinful path. But if someone is already living in sin, God can still sovereignly direct that person’s path for his purposes.

Another example of this is the crucifixion of Jesus. To kill Jesus was a sin. But God ordained that Jesus should be killed. God didn’t take righteous men and then sovereignly direct them to kill Jesus. Rather, God took unrighteous men who were already walking in sin and then sovereignly directed them down this specific path so that they would crucify Jesus. As Acts 2:23 clearly states, “This Jesus, delivered up according to the definite plan and foreknowledge of God, you crucified and killed by the hands of lawless men.” Again, notice that God planned for this to happen but he didn’t cause obedient men to become disobedient. Rather, he took disobedient men and ordained that they disobey God in the exact way that he wanted.

In other words, God’s sovereign will still reigns over man’s free will to reject God’s prescribed will. Even when we freely choose to break God’s commands the outcomes still produce what God wants (Genesis 50:20, Proverbs 16:4, Proverbs 19:21).

Again, he would never cause two people trying to obey him to then get divorced. He won’t take two single Christians who are trying to live righteously and then sovereignly ordain that they marry and sin so badly that they need a divorce. But if one or both of these people were living in sin, God could sovereignly take that sin and direct it in such a way that two people marry each other so that they experience a terrible marriage or divorce if God wants them to experience that so he can bring about the outcome that he wants through this.

Please note, if you are someone who has been divorced, I’m not saying that you sinned and that’s why you got a divorce. I would never say that about someone I don’t know. Sometimes one person is not sinning and all the blame is truly only on one person in the marriage and not the other. But someone in the relationship was sinning, even if it was not you. Divorce is only biblically permitted for two sins: the sin of adultery (Matthew 19:9) or the sin of an unbeliever continuing to reject Christ and then wanting to leave the believing spouse (1 Corinthians 7:15). If a divorce occurs for any other reason than these two sins, that divorce in itself is sin because it goes against God’s prescribed will about divorce. Thus, divorce always involves sin one way or the other.

My point is, anytime divorce occurs it was never caused by God because sin is always involved with divorce and God can’t cause sin (James 1:13). But God can direct the steps of someone living in sin. Thus, it’s theologically consistent to believe that God is still in control of who you marry even though sin is involved and divorces still happen.

Divorce is always connected to sin, but God is still sovereign over sin and can still use sin to produce the outcomes that he wants. What possible outcomes could God want to produce through divorce or through a difficult marriage? There are endless possibilities. Here’s a few examples:

Divorce is not the final outcome for two souls. God can use divorce as a part of someone’s testimony of how they came to faith. God will allow people to choose the path of sin (2 Corinthians 5:10), and in God’s sovereignty he can even use that path of sin to lead people to God’s salvation one day.

Additionally, even if someone rejects God forever and goes to hell, in love God will still provide that person with plenty of warning signs throughout their life on earth that they are headed in the wrong direction. God can use the pain of divorce as a warning sign to someone who is living in sin that they are headed in the wrong direction. God wants us to see the consequences of our sins and wake up. But some people will still choose to ignore his warning signs that their sinful life is leading them to hell. When they stand before God’s judgment when they die, they will not be able to say they were not warned (Romans 1:20). God uses the consequences of sin on earth to lovingly warn rebellious people about the eternal consequences of sin for eternity. If we reject God’s warnings on earth, we will not receive anymore warnings when we die. We will just suffer the punishment our sins deserve if Christ is not our propitiation (1 John 2:1-2).

In summary, God will never take two obedient Christians who are trying to follow his word and then put them together and sovereignly ordain that they will get divorced. God will only ordain that a couple marry each other even though he knows it will end in divorce if both (or at least one) of those people is willfully already sinning against God.

There’s a lot more that needs to be said, but I’ve already covered that in some other articles, like this one: Can You Miss God’s Will for Your Life and Relationships?

You may also want to read, What Does the Bible Say About Divorce and Remarriage?