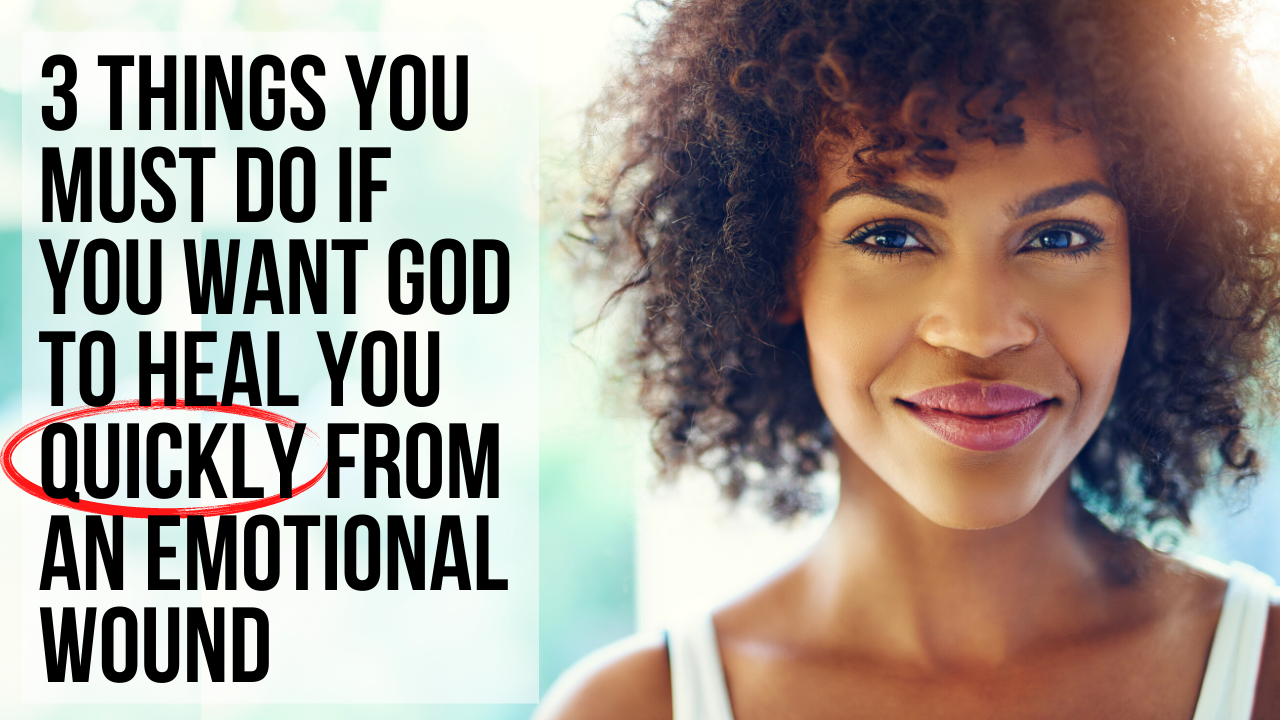 If you want God to heal you from an emotional wound in the fastest way possible, here are 3 things you must do.

1. Accept that You Are Hurt and Need His Treatment

One of the surest ways to slow down your healing is to pretend like you are not hurt. When we are in denial about an emotional wound, we are actually going to make the wound even deeper and thus it will take longer to heal it once we can no longer deny that it’s real.

This is a lot like a sports injury. Some athletes are so dedicated to their sport that they can’t admit to themselves that they have an injury and need time off the field. But when an athlete keeps running and jumping and putting force on a part of their body that is hurt, all they are doing is making it worse and thus delaying the healing process that is going to need to happen one way or the other.

We can admit we have an emotional wound or we can pretend like we don’t, but either way it’s going to catch up to us eventually. Sometimes you can tough it out for a while; but if you keep putting pressure on your weakness, eventually that weakened area will just break completely.

This is why some people end up having a total emotional breakdown. It can look like it came out of nowhere, but that’s because there was an emotional issue under the surface for a long time that was just getting worse and worse because the person would not admit to themselves that it was there.

So if you want to heal faster, you can’t deny you have an issue that needs healing. If you do, eventually it will catch up to you and you will be forced to go through a season of healing but it will take a lot longer now because you ignored it for so long. As Psalm 32:3-5 states:

Blessed is the man against whom the Lord counts no iniquity, and in whose spirit there is no deceit. For when I kept silent, my bones wasted away through my groaning all day long. For day and night your hand was heavy upon me; my strength was dried up as by the heat of summer. I acknowledged my sin to you, and I did not cover my iniquity; I said, ‘I will confess my transgressions to the Lord,’ and you forgave the iniquity of my sin.”

2. Make Sure Your Beliefs (Emotional Bones) Are Set Properly Before You Try to Start Moving Forward

When I was a young boy, I was playing tag with the neighborhood kids. As I was running through my backyard and into the front yard, to save time I decided to jump the fence instead of opening the gate. But right as I did, our giant Rottweiler jumped on the fence too and thus sprung me forward into the side of our garbage cans. To protect my head, I put my arm out. In the process I broke my elbow and dislocated it.

What made this really bad, however, was that our family doctor misdiagnosed the issue. Even the radiologist misread the x-rays. Thankfully my mom worked in the OR at a level 1 trauma center at the country hospital, so after days of me still complaining about really bad pain, she showed my x-ray to a specialist. That night I had emergency surgery to reset the bone. The doctor said if we would have let my arm heal the way it was, I would have had permanent damage and it would never have worked right.

I’m not sharing this so you feel bad for me. Rather, I’m highlighting the importance of making sure our beliefs are properly set by pointing to the metaphor of how our bones must be properly set before our bodies start permanently fusing those misaligned bones in an unnatural and painful way.

Our beliefs are like the bones to our emotions. Our beliefs give our emotions structure to form around. What we believe will dictate how we feel. When you have a bad belief, your heart will hurt. If you never reset that bad belief and correct it, you will live the rest of your life under a lie that will keep hurting you.

You have to break the agreements you’ve formed with these lies. You have to reject unbiblical statements. You have to make sure your beliefs are pointing in the true direction outlined in Scripture. If you start trying to move on when you are still believing the lies you’ve learned through that emotional wound, you are going to be internally handicapped until those beliefs get reset and recast.

Once you reject the lies and believe the truth, then you can start healing and moving on. As 2 Corinthians 10:5 states, “We destroy arguments and every lofty opinion raised against the knowledge of God, and take every thought captive to obey Christ . . . .”

3. Don’t Reinjure Yourself By Jumping Back Into Life Too Soon

Going slow is the fastest way to heal. This may not be the answer you wanted to hear, but healing doesn’t usually happen quickly. Maybe it will for you. I’m sure it has for some. But normally healing takes time.

Sometimes there’s nothing you can do to speed up your healing. All you can do is slow your healing down. In other words, if you try to jump back into life too soon, oftentimes you are just going to reinjure an old wound that was not fully healed yet.

If you start dating too soon after a breakup, if you start trying to forget someone before you have had time to unpack what really happened between you two, or if you start trying to counsel others when you still need counseling yourself – oftentimes you are going to slow down your healing by masking your wound and putting too much pressure on yourself too soon.

There’s nothing wrong with trying to heal as fast as possible. You don’t want to linger in the past if you don’t need to. Eventually we all need to move on and keep moving forward. But again, sometimes the fastest way possible to heal is to remember to go slow.

Sometimes we just need to accept that this is going to take more time that we want. But by accepting this, we are choosing the fastest road to healing. As Proverbs 19:2 explains, “Desire without knowledge is not good, and whoever makes haste with his feet misses his way.”