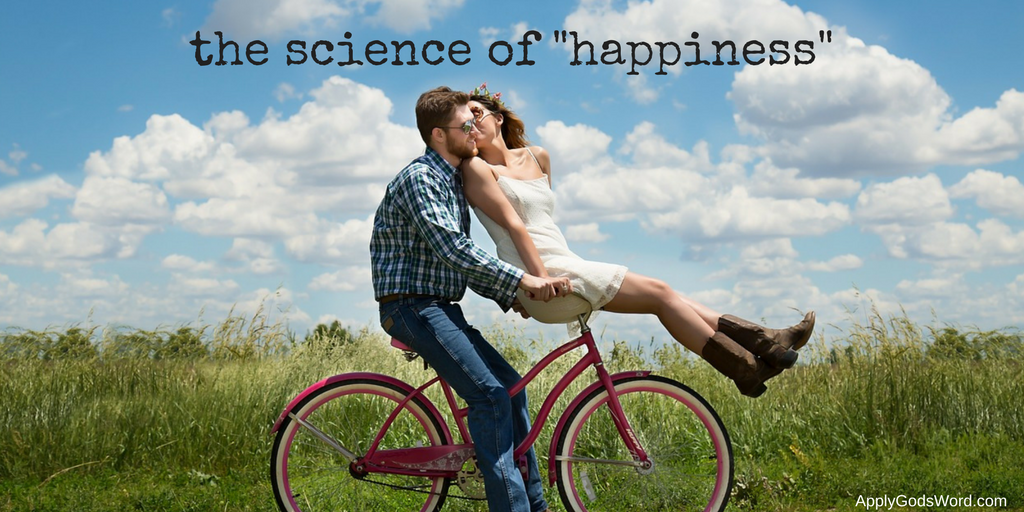 To talk about happiness seems so trite, doesn’t it? Corny even. It certainly doesn’t feel like it has much impact on the weightier matters in life, most importantly our walk with God. As Christians, happiness is great, but obedience, that’s the real point to all this. Right?

Everyone wants to be happy. For most of us, however, to verbalize this desire we first have to face our fear of being misunderstood as whimsical teenagers still too idealistic for the adult world in which we find ourselves. I don’t know about you, but to bring up the idea of happiness makes me feel uncomfortable. Perhaps my theologically minded peers might perceive me as wanting everyone to sing “Happy birthday” at every opportunity or that we should all giggle more or wear goofy hats.

While happiness has certainly not been a topic commonly associated with serious theology, Bible study, and “God talk,” science, of all places, is perhaps reminding us it should. When I read my Bible, joy seems to be a higher, more important theme than most of my big doctrine books imply.

Within the last few decades, when the fields of positive psychology and neuroscience (some have termed this union positive neuroscience) started truly gauging with empirical data people’s SWB (subjective well-being), the findings have reinforced how happy God’s commands can make us if we truly obey them with a full and willing heart.

Certainly this was not the intention of the scientific community who have studied happiness, but when we view their findings through a Christian lens, it’s darn near impossible not to see the connection between happiness and obeying what the Bible says.

What Happens Neurologically When You Are Happy?

Happiness is commonly defined as that feeling of joy, satisfaction, freedom, or contentment. It’s really a subjective term, though, so that word “feeling” is important. For happiness is not merely a set of external circumstances that we can add together like a mathematical equation to get our desired outcome for every human on earth.

Biologically, “happiness” is a physical sensation resulting from the way our brains perceive and then react to our external circumstances, which varies from person to person. A body feels a certain way because our brains release different types of neurotransmitters, which are basically chemicals sent along our neural pathways that make us feel different ways depending on which chemicals are being released and in what amount.

It’s kind of like our brains are bartenders serving up chemical cocktails to the rest of the body, mixing and matching all different types of neurotransmitters. From person to person the brain regulates, disperses, and mixes these chemicals slightly differently. Thus we all have unique moods and temperaments.

Obviously these examples are overly simplified since the chemical balance in our bodies is much more complex; but the general idea here is that the brain releases chemicals and thus we feel different ways because of this.

The key question in the search for happiness, therefore, is what triggers our brains to release certain chemicals at certain times?

It’s All About the Stimulus

When a brain is functionally normally, it reacts to stimulus. A stimulus is “That which influences or causes a temporary increase of physiological activity or response in the whole organism or in any of its parts.”

In other words, if you step out of the jeep on your Serengeti safari, and suddenly you see a lion a few paces away hiding in the bushes, your brain is going to react to that stimuli (the lion) by sending sensations of fear throughout your neural pathway.

During the winter months when there is more darkness, your brain responds by producing more melatonin, which is a hormone associated with helping to regulate sleeping cycles. The more melatonin you have, the more sleepy and lethargic you will feel. This leads to feeling depressed or SAD (seasonal defective disorder). (Is it any wonder people look so much happier in the summer months?)

This is where the fields of positive psychology (with the help of neuroscience) has provided empirical data we haven’t always had. And if you are someone who reads the Bible, you will be familiar with the most powerful stimulus there is for producing feelings of happiness by the brain.

What Does Scientific Research Say Is the Most Powerful Stimulus to Happiness?

Positive psychology started gaining steam in 1998 when Martin Seligman became president of the American Psychology Association and chose this field of study for his theme as president (each president chooses a theme of study for their term).

Since that time, many stimuli have been tested to see what causes good emotional responses in humans. For example, The University of Berkley has created The Greater Good Science Center, which studies the psychology, sociology, and neuroscience of well-being. They have identified core themes that they believe stimulate feelings of well-bring, which include but are not limited to: gratitude, compassion, empathy, forgiveness, and mindfulness.

(Notice the Bible commands us to be grateful (1 Thessalonians 5:18), compassionate (Colossians 3:12), empathetic (Galatians 6:2), forgiving (Ephesians 4:32), and mindful (1 Peter 4:7). But this is not the most interesting findings for Christians).

I could present article after article that show stimulus encouraged in the Bible produce emotions of well-being and sensations of happiness, but if we wanted to cut right to the heart of the scientific data, we will also find ourselves right at the heart of God’s commands. In an interview conducted by Harvard Business Review, Professor Daniel Gilbert discloses his findings on the science of happiness:

If I had to summarize all the scientific literature on the causes of human happiness in one word, that word would be “social.” We are by far the most social species on Earth. Even ants have nothing on us. If I wanted to predict your happiness, and I could know only one thing about you, I wouldn’t want to know your gender, religion, health, or income. I’d want to know about your social network—about your friends and family and the strength of your bonds with them.”

As reported by Harvard Magazine, when Nobel Prize winner Daniel Kahneman of Princeton did research involving thousands or participants tracking different episodes in their normal days which correlated to happiness (more specifically their SWB), he found what most of us would expect. Commuting to work was a happiness killer. Sleep influenced happiness a lot. TV watching was average. What topped the list? Intimate relationships.

The Bible and Science Agree: Giving and Receiving Love (Relationships) Bring Humans the Most Happiness

While I highly doubt researchers at Berkley and Harvard consulted the Word of God in their study on happiness, it’s remarkable to me that the data reinforces what so many good theologians and pastors have been trying to tell the world for centuries. When we study the Bible, it’s impossible to deny that God’s commands are not there to hinder or decrease our joy, but to enhance it for his glory. For example, in Deuteronomy 10:12-13, Moses explains:

But the one who looks into the perfect law, the law of liberty, and perseveres, being no hearer who forgets but a doer who acts, he will be blessed in his doing.”

So according the Bible, God’s commands are not just there to give the Judge a basis for condemning people. Rather, God’s commands are like a treasure map leading us to a deepening relationship with him, and in his presence is fullness of joy (Psalm 16:11).

Once we put our faith in Jesus and rely on his grace for salvation (Ephesians 2:8-10), we are not then given all possible joy, but rather we are given the possibility to receive maximum joy through being empowered to obey God’s commands, which bring joy. Summary: if we obey God’s commands, we will be blessed and experience the good God desires for us.

So what are God’s commands? Romans 13:8-10 summarizes the entire law for us:

Let no debt remain outstanding, except the continuing debt to love one another, for whoever loves others has fulfilled the law. 9 The commandments, “You shall not commit adultery,” “You shall not murder,” “You shall not steal,” “You shall not covet,” and whatever other command there may be, are summed up in this one command: “Love your neighbor as yourself.” 10 Love does no harm to a neighbor. Therefore love is the fulfillment of the law.”

So while the pursuit of happiness may sound trite, corny even at times, the pursuit of love is the most serious endeavor for any Christian, for it is at the heart of what God commands. To not love is to not know God, for God is love (1 John 4:8). When Jesus was asked what are the greatest commandments, he stated the first is to love God and the second is to love people (Matthew 22:37-39). When you study the Ten Commandments, it’s not hard to see that the first four relate to our relationship with God and the last six to our relationship with other people (Exodus 20:1-17).

When we get to the heart of what God’s commands are all about, we have to conclude they revolve around relationships, first with God and then with other people.

So what’s the correlation between the scientific data, happiness, and God’s greatest commands? God’s commands are meant for our good (Deuteronomy 10:13). And God’s commands are all about love (Romans 13:10). Therefore the Bible is saying that if you want good, love God and people in relationships.

Science is saying the same thing. It shows us the end result of what the Bible has promised. The data proves that if you want happiness, you need to have strong relationships, a sense of “social” belonging. What science doesn’t show us is how to have those bonds; it just reports the benefits of those bonds. Thankfully, God, through the commands in the Bible, does show us how to have great relationships.

In conclusion, could it be that God designed the human brain to release the most pleasurable neurotransmitters when we live a life most glorifying to him? We glorify God by reflecting his image. And we reflect his image best when we love people. Science, therefore, has supported what most of has have known all along – obeying and loving God produces the happiest life possible, and as Christians this is the most serious of pursuits.