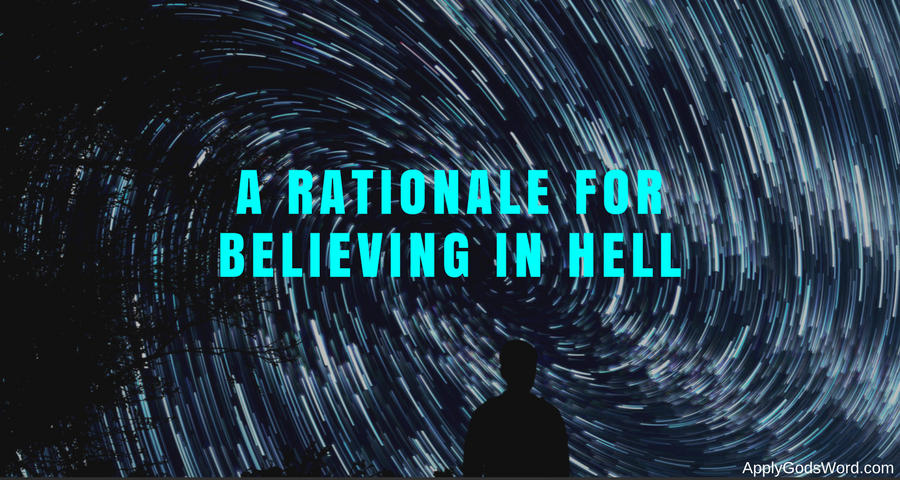 Whenever questions like “Is hell real?” or “What reasons are there for hell?” or “Does hell really exist since God is love?” are asked, emotional answers are often given.

And rightly so. Although I believe the doctrine of eternal hell to be reality, the idea of hell is truly heartbreaking and mindboggling to me as well. Eternity is an idea too big for humans to grasp. How much more the idea of an eternity of real torture?

To flippantly spout off Bible verses about hell is often not the right response when someone asks about the reasons for hell. These emotional questions often meet our “traditional Christian” ears only to receive defensive answers from our lips, “Of course hell is real! Don’t you believe the Bible! Obviously not . . . .”

So to me, rational reasons for the reality of hell are usually not helpful to give right away. I think most people need you to listen first, identify with their confusion, and empathize with the feelings being expressed. Eventually, however, there is a place to talk about the rationale for an eternal hell.

What follows are just one reasons for hell. Missing are the obvious answers found in plain black and white all throughout Scripture. Because the Bible says hell exists is the biggest reason to believe it is real. That is enough for me and it should be enough for everyone. But there are more reasons why hell is rationale too. Here’s just one.

Hell Is Real Because Moral Lines Exist for Everyone, But God’s Moral Line Matters More

While the idea of eternal punishment in hell is difficult for people to grasp, the concept of punishment for wrong doing is not. Everyone believes consequences for intentional wrong doing is right. Certainly people disagree on what criminal behavior really is and on what appropriate punishments there should be. But everyone agrees there is a time and place for punishment of crimes. No rational person says society should be free of any punishment for evil deeds.

For example, I may think people should go to prison one year for cussing (I obviously don’t think this). Another person, on the other hand, would first laugh at me, but then they would be outraged at my suggestion, “How dare you send people to prison against their will for doing something that’s not even wrong. Who is to say cussing is even bad, let alone a crime punishable for a year in prison. You are an unloving lunatic!”

Why are they outraged? Because they feel no moral line has been crossed by cussing. Nowhere in the argument, however, are they upset about the idea of prison being real. They are angry, rather, that someone could go to prison for a reason they felt was unjust.

They would most likely reply with something like, “Robbing a store with a gun, assaulting someone, identity theft . . . I don’t know? Something that actually deserves prison time.”

Here’s where I’m going with all this. We don’t have a problem with prison, but we have innate desire for just judgements. We want “the time to fit the crime.”

Let’s take this a step further. Most people find it appalling that “good people” go to hell just because they never became a Christian. However, what if I asked, “Well, what would you send someone to hell for?”

Being Hitler, murdering someone, child molestation, genocide, and other terrible sins would be identified. Again, the problem most people have is not with the idea of hell but the belief that most people who go to hell don’t deserve it.

All rational humans believe in the idea of punishment for wrong doing. Hell just detests us because we feel there is no moral crime (or very few sins bad enough) that deserve a punishment that extreme. In effect, we want to be God. We want to say what the rules of the game are. God has defined the requirements for heaven and hell, we just don’t like them. And disbelief and dislike are two very different things.

The problem for us is that God’s moral line is the one that matters. God is God and we are not. God has the same principle in operation that we all do: Evil deserves punishment. The difference is that God has a much higher standard for what is truly evil and thus a much more severe penalty for crossing that moral line. He is perfectly holy, just, and pure. We are not. Thus it makes sense we disagree on what true justice looks like.

We don’t like the idea of hell because we disagree with God on the standards of morality. We don’t disagree with God on the reality of justice being right. Our moral lines are just different. While you would think my moral line is cruel to put people in prison for cussing, the world thinks God is cruel (or not real) because he decides to send people to hell for eternity if they have not lived a sinless life or have not been made perfect through faith in Jesus Christ who lived a perfect life for us.

So the real question is, whose moral line is right? Simply put, God’s moral line is the only that truly matters because he is God and we are not. God is perfectly holy, so holy it is beyond comprehension. Our morality is so skewed we think offenses against an eternal God don’t deserve and eternal punishment. God, through is word, has communicated otherwise.

So hell is very rational when your reality includes the existence of a holy God whose standards are eternally greater than ours.