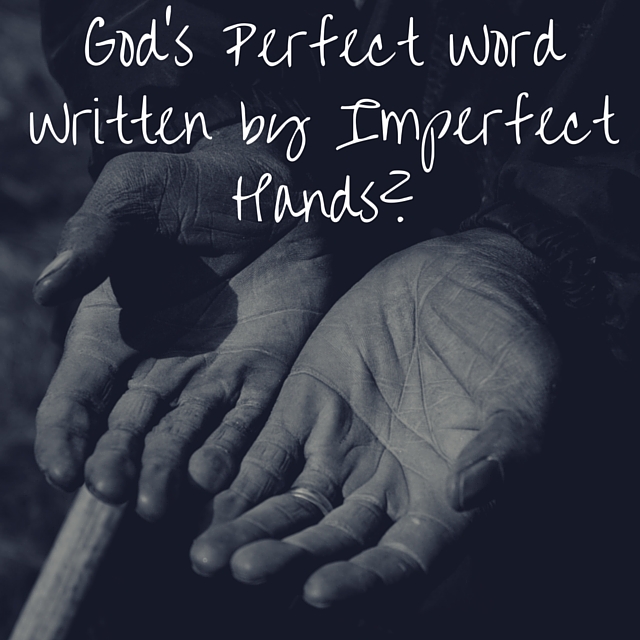 For no prophecy was ever produced by the will of man, but men spoke from God as they were carried along by the Holy Spirit.-2 Peter 1:21

One common objective to the Bible being the perfect and divinely inspired word of God is that it was written by the hands of men. Why would God use imperfect people to write his perfect Scriptures? On the surface this seems like a very valid complaint. But if one is to believe in God at all, one must also admit it is God’s normal and regular pattern to use man for most of what he does.

Right from the beginning of creation, God made man to work the garden (Genesis 2:15). God could have worked it himself, but he used Adam to do it. God told Adam and Eve to be fruitful and multiply (Genesis 1:28). He could have populated the earth by producing people himself as he did with the first man and woman, but instead he chose to use Adam and Eve to produce other people. God could have made the Ark, but God used Noah to do it. He could have struck down Goliath, but he used David to cast the stone. God could have set the infant Jesus in the manger himself, but he used Mary’s body to host the Savior and Joseph’s fatherly care to guide Mary and Jesus along in the early years. Jesus could have stayed to make disciples throughout the earth, but he commissioned the eleven and all of us to do it through his power.

On and on you see that God has ordained man to be used as his tool to accomplish his will. It is a profound mystery how God brings about his will through the free will of man, but he does it nonetheless. Only a real God could produce this feat. In our human minds we cannot imagine how God can be in control and have his will produced by using free agents like us. When faced with this reality, in doubt we begin to question God because we see him in our own image, and we know that no human could use other free will humans to produce exactly what one wants. This, therefore, should not be a reason to doubt God, but rather a reason to believe that the God of the Bible really is God. If God could not do things that surpass our understanding or human ability, such as use imperfect people to produce his perfect word, then this would be cause to doubt God. If you understand the Creator perfectly, this is evidence that he is probably not really the Creator. It is right for the created to not fully comprehend the Creator.

With all that said, it should be no surprise that when God wanted to produce a perfect written record, which we have come to call the Bible, that he used man to do it. God has used man for almost everything, therefore it would be far odder and less believable if I was told God wrote a book with his tangible divine finger and dropped it out of the sky one day. If that was the story of how the Bible came to us, the origins of this divine book would be an outlier compared to the stories contained within this book. When you read the Bible, dropping things from heaven to earth without using human means is not the type of thing we see God doing very often. Again, even with the miracle of the Incarnation, God produces a miracle but he still used a human host.

If you were to read the Bible, and then were to ask yourself, “If God made a divine book, how would you expect him to do it?” The answer would not be that you would expect the God who uses man to suddenly not use man but drop a book from heaven out of the sky. I would expect him to use multiple authors, so no one man would get the glory but only God. I would expect it to explain the beginning and tell the future, to be written in different parts of the world, and be written over a period of time that is longer than any one human life could last. I would expect it to have a human feel written with different styles and genres according to the humans’ preferences, but I would expect its content to never contradict and have consistent themes and truths. I would expect there to be an element of faith in what we have not seen, not having all our questions answered with our own eyes since this book itself states that to love God we will need to put our faith in him. I would expect unbelievers to doubt its perfection, and I would expect the book itself to predict that there would be doubters of its truth.

After honestly reading the Bible, the Bible we have is the one any honest person should expect to have. Surely if God where to drop a book out of the sky, man would worship the book and miss the Creator of it. Is this not the reason the manna which was dropped from the sky would spoil after one day, so that the Israelites would not begin to worship the manna itself but continue to worship and trust the God who provided it? People worship the silliest things. I once saw a news report that an entire restaurant stopped what they were doing because a woman’s pancake had taken the form of what they imagined Mary the mother of Jesus to look like, as though she was manifesting through the pancake. Look through the churches’ history and see how sinful it has been with “relics.” Can you imagine what sinners would do with a tangible book fallen from heaven?

The fact that the Bible claims to be written through human hands by the inspiration of the Holy Spirit, amongst other facts, fits perfectly with the rest of reality God has made clear through the Bible. The fact that God used imperfect people to write his perfect words should be cause for more faith in such a powerful God, not less.