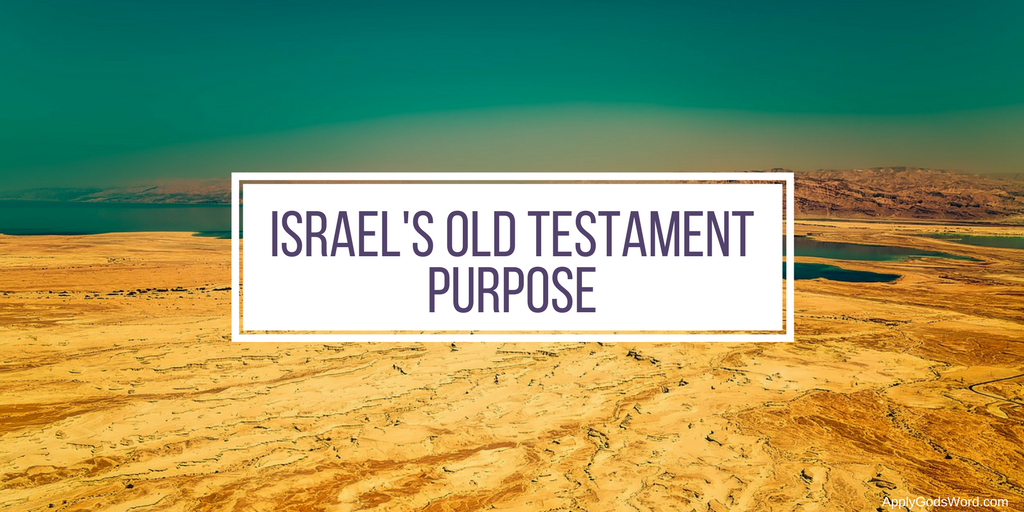 As Christians, it is easy to read the New Testament and understand God’s plan for the world. He wants to save people from sin through Jesus Christ.

Sin has corrupted everything. Not only is the punishment of sin to go to hell, it brings hell into every area of life. You cannot live your purpose of imaging, serving, and glorifying God while under the curse of sin. So it’s no wonder God seeks to reverse the effects of sin and make us into new creations. But as we read the Old Testament, things can get a bit murkier.

What was God’s purpose for Israel? Why did he choose the Jews if he knew they would fail him? Why did God not just send Jesus Christ immediately rather than have so much Old Testament history?

If God would have done nothing, every human after Adam and Eve would be eternally separated from God in hell, aimless on earth, and never able to fulfill their purpose of reigning as God intended. But God did do something. God made a way for people to be brought back into fellowship with him and empowered for his kingdom service now on earth and in the age to come.

Right after they sin, God promises a Redeemer to come through Adam and Eve who will crush the head of Satan (Genesis 3:15). God then makes a special covenant with Abraham (Genesis 12:2-3, Genesis 22:17-18). As God multiplied Abraham’s line into the nation of Israel, through Moses he gave them the law and reaffirmed his covenant to them (Exodus 19:5-6). After Israel became a nation with laws and land, God then made a covenant with their king, David (2 Samuel 7:16, 1 Kings 9:4-8).

God did not choose Israel because of their greatness but because of their weakness and insignificance (Deuteronomy 7:7, 9:4-6). The whole world was being condemned and was alienated from God. Only through Israel did God offer salvation. And while many think this salvation was offered to Israel only, it is important to see that God’s salvation was offered through Israel to all. Right from the first covenant God made with Abraham, God made it clear that his purpose for Israel was about offering salvation to the world:

And I will make of you a great nation, and I will bless you and make your name great, so that you will be a blessing. 3 I will bless those who bless you, and him who dishonors you I will curse, and in you all the families of the earth shall be blessed.” (Genesis 12:2-3)

The gospel was the reason God chose Israel. God’s purpose for Israel was to bring the gospel to the world. Through the gospel humans are cleansed from sin and regain their purpose. Through Israel came Jesus. This was Israel’s main purpose right from the start. Galatians 3:7-9 shows us how we are to interpret God’s promise to Abraham:

Know then that it is those of faith who are the sons of Abraham. 8 And the Scripture, foreseeing that God would justify the Gentiles by faith, preached the gospel beforehand to Abraham, saying, “In you shall all the nations be blessed.” 9 So then, those who are of faith are blessed along with Abraham, the man of faith.

So how did God offer salvation to the world through Israel? As Dr. Iain Duguid explains:

To fulfill God’s purposes, another, better Israel would be required, a servant who would take Israel’s place, doing what Israel was unable to do, fulfilling her calling to bring light to the nations (Isa. 49:6).

This servant “Israel” took flesh in the person of Jesus Christ. From the moment of His birth, He reenacted Israel’s history, going down to Egypt so that He could be the true son whom God called out of Egypt (Matt. 2:15, quoting Hos. 11:1). Just as Israel passed through the Red Sea, Jesus passed through the waters of baptism (Matt. 3) before being led out into the wilderness, where He successfully faced the same temptations that Israel had failed to endure (Matt. 4). At the beginning of His ministry, Jesus read aloud Isaiah 61:1–2, declaring that the Scripture had been fulfilled in His hearers’ presence (Luke 4:18–19): He was Himself the promised Servant upon whom God’s Spirit rested. As the new Israel, Jesus perfectly fulfilled the demands of the law. The new covenant that Jeremiah anticipated was established in His blood (Luke 22:20).

What Was Not God’s Purpose for Israel?

God’s purpose for Israel was not to bring the law to the world as a solution to the world’s problems. Israel, without Christ, was never meant to be God’s solution for anything. If the law was not meant to be a solution, what was the purpose of the law given to Israel? Galatians 3:19-26 explains:

Why then the law? It was added because of transgressions, until the offspring should come to whom the promise had been made, and it was put in place through angels by an intermediary. 20 Now an intermediary implies more than one, but God is one.

21 Is the law then contrary to the promises of God? Certainly not! For if a law had been given that could give life, then righteousness would indeed be by the law. 22 But the Scripture imprisoned everything under sin, so that the promise by faith in Jesus Christ might be given to those who believe.

23 Now before faith came, we were held captive under the law, imprisoned until the coming faith would be revealed. 24 So then, the law was our guardian until Christ came, in order that we might be justified by faith. 25 But now that faith has come, we are no longer under a guardian, 26 for in Christ Jesus you are all sons of God, through faith.

The law was not God’s solution for mankind’s problem. When Adam and Eve sinned, every human was then destined to be sinful. Our main problem was not only that we needed our bad deeds wiped away, although we do. The deeper problem is that we ourselves are bad before we come to Christ, thus are unable to reign as God’s children, unable to fulfill his purposes for us.

The law was added to show us our trespasses, to guide us towards our Savior (Messiah), and guide us like a guardian while we were unable to obey God, like young heirs in need of guardians while they were too immature to rule on their own. The laws were meant to show us what God is like. But the law was never a prescription to our sickness, “I do not nullify the grace of God, for if righteousness were through the law, then Christ died for no purpose” (Galatians 2:21).

The church did not replace Israel. Rather, Israel, from the beginning, was the seedlings of the church. A redeemed church, a new people able to be in fellowship with God and able to fulfill his purpose, was God’s plan from the beginning. God gave Israel the law to guide her like a child until she could come of age through Jesus
Christ, and at that time God did away with the law because now we have the Spirit guiding us (Galatians 4:4).

Through Israel the Messiah came and created a new people, the church. Israel was not replaced. Israel was transformed and expanded to include Gentiles too. Now God sees his chosen people not through an ethnic lens but through Jesus’ blood. Now everyone who has faith in Jesus is God’s chosen people. Israel was not replaced. For we who are in Jesus through faith are now the true sons and daughters of Abraham (Galatians 3:7, 27-29).