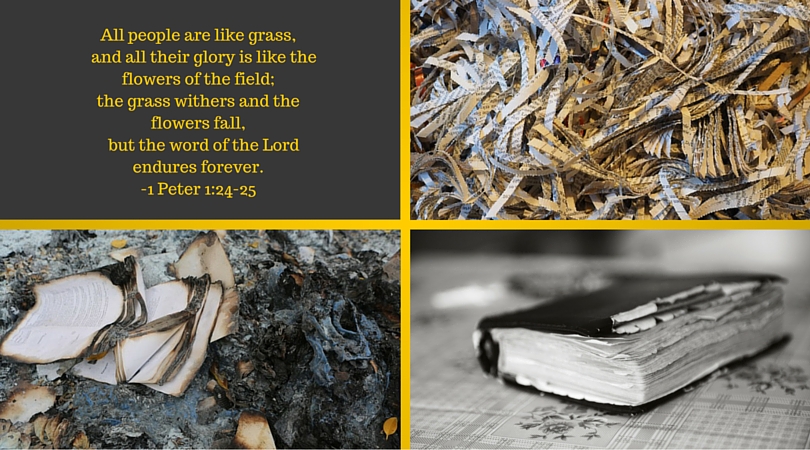 Bible Verse:
Heaven and earth will pass away, but my words will never pass away.-Mark 13:31

Throughout the history of the world, God’s word has been under attack. The Old Testament is full of condemnations for the many false prophets seeking to replace the true word of God with their own (Ezekiel 22:28). As early as the seventh century BC, the sinful kings and leaders before King Josiah tried to forget God’s written law, but God allowed Josiah to find the book of the law once more (2 Kings 22). Antiochus IV Epiphanes, around the time of 170BC, made it punishable by death to have a copy of the Scriptures in one’s possession.
During the first 300 years after Christ, the Roman Empire did all it could to burn every copy of the New Testament. As time went on, the Catholic Church forbade anyone from reading and interpreting the Scriptures other than the official Catholic Church. Many during the Reformation lost their lives over the fight to have the Holy Scriptures printed and accessible in the people’s common languages.
But despite all the opposition to the Scriptures, there are still more copies of the original manuscripts than any other book written in all of history. (For a more thorough understanding of the Bible’s origins compared to other ancient texts, read the article “Is the Original Bible Still in Existence?” at gotquestions.org).
Within the last 50 years, the Bible as been printed nearly 4 billion times. Coming in at a distant second is Quotations from the Works of Mao Tse-tung at 820 million copies printed, with third place going to Harry Potter at 400 million. 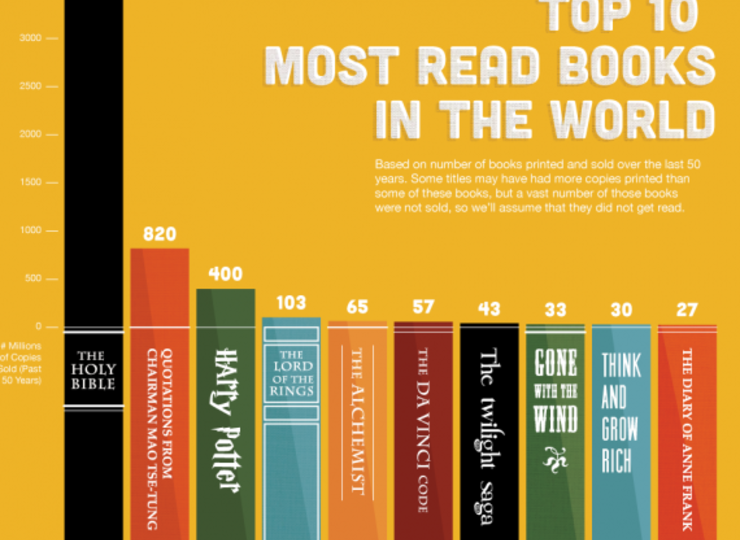 Graphic taken from Relevant Magazine Article: The Bible Tops the List of the Most Read Books in the World

Why is this important? This is important because it proves that what the Bible says is true. Jesus said in Mark 13:31, “Heaven and earth will pass away, but my words will never pass away.” Despite all the opposition, despite all the time that has passed, despite all the claims that the Bible is not reliable, the Bible’s claims and predictions are still coming true. We can trust the Bible because the Bible proves itself true. Jesus said that his words will never pass away, and they haven’t despite many attempts by unbelievers.
This is also important because this is another reason why we must never trust “new discoveries” of books people think should be added to the Canon. For example, many people claim that the Gospel of Thomas found in 1945 in Egypt should be a part of the Bible. Besides that fact that the content of this book does not match with the doctrines of the true word of God, the true word of God would never disappear for such a long period of time.
God authenticates his word through making his word come true. Jesus said his word will never pass away, and so far the Bible hasn’t, which is great evidence that it really is the word of God. God’s word can be trusted because it’s true, and as much as people have tried to destroy it and deny it, they have not been successful. The fact that those who have denied the word have tried to destroy the word and yet have failed should cause everyone to see the truth of the claims the Bible makes.
You can deny God’s word, but you can’t destroy it. Therefore it really makes no sense to keep denying it because it keeps proving itself true.