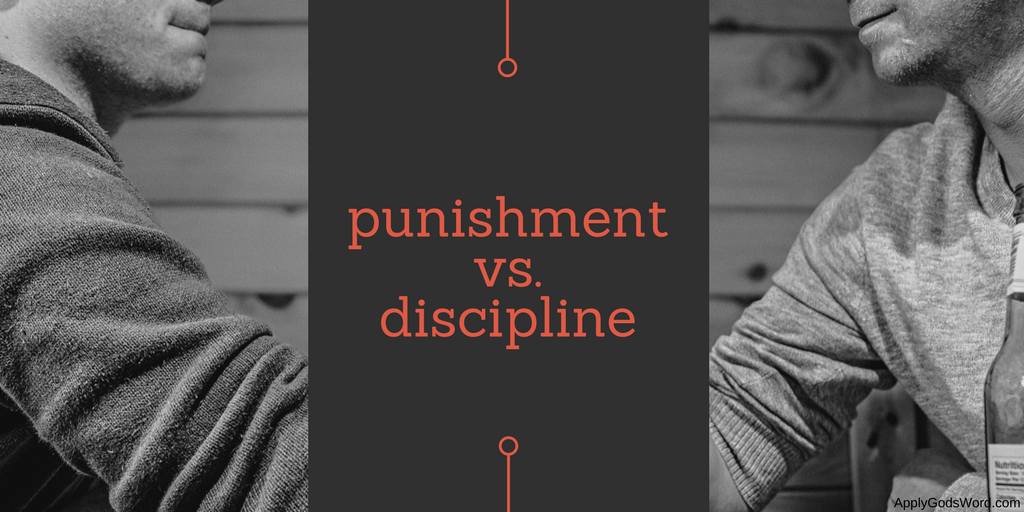 According to the Bible, God’s grace saves Christians from the punishment we deserve, but it does not always save us from the consequences of our actions and it never saves us from God’s discipline.

When it comes to leading, parenting, responding to offenses, or just having authority over people in all the varies roles that exist on earth, it is crucial to know the biblical differences between punishment, discipline, and consequences.

Punishment Is Condemning. Discipline Is Correcting. Consequences Are Causational

Whenever you try to define words in the Bible, you cannot be overly dogmatic since words are often used in a variety of ways depending on the context. Also, due to translation issues from the original languages of the Bible, sometimes different words will be used in different versions of the Bible.

So not everyone will use these three words with the definitions I am about to give, but I believe there is a difference between God’s punishment, God’s discipline, and earthly consequences.

Another major difference between biblical punishment, discipline, and consequences has to do with the past, present, and future. Punishments deal with the past. Consequences are often what we deal with in the present. And discipline looks towards a better future.  In Dr. Cloud and Dr. Townsend’s book, Boundaries, they explain:

Discipline and punishment have a different relationship to time. Punishment looks back. It focuses on making payment for wrongs done in the past.  Christ’s suffering was payment, for example, of our sin. Discipline, however, looks forward. The lessons we learn from discipline help us to not make the same mistakes again: “God disciplines us for our good, that we may share in his holiness” (Hebrews 12:10).

When it comes to God dealing with his children, the Bible says God only disciplines those he loves.

It is an abuse of grace to assume that God has promised to rescue us from all three of these results of sin. God only promises us that grace will save us from the penalty of our sins. Romans 3:21-23 (NLT) explains:

For everyone has sinned; we all fall short of God’s glorious standard.24 Yet God, in his grace, freely makes us right in his sight. He did this through Christ Jesus when he freed us from the penalty for our sins.25 For God presented Jesus as the sacrifice for sin. People are made right with God when they believe that Jesus sacrificed his life, shedding his blood.”

We abuse grace, however, when we get mad at God for disciplining us. God does not save us from discipline because discipline is for our good. It might feel like punishment in the moment, but when we receive God’s true intentions for us, our lives will change through his grace:

My son, do not regard lightly the discipline of the Lord, nor be weary when reproved by him.6 For the Lord disciplines the one he loves, and chastises every son whom he receives.” (Hebrews 12:5-6)

In general I believe the more we receive God’s discipline, the quicker we escape the natural consequences of our sins. Consequences occur when we break from the natural order of God’s ways. When we return to God’s path, our lives begin to come back under his leading and naturally the chaos of our rebellious lifestyles (consequences) begin to fade away. The more we are in submission to God’s intentions for our lives the less consequences we experience.

For example, if a husband has an affair, one of the consequences (besides having a ruined marriage in need of restoration) might be that he must leave the home, see his kids less, and no longer have the benefits of a dual income family. God and the wife might not be trying to punish this man, but these painful life circumstances are consequences of his sin.

But the sooner the man returns to God and begins to repent of his sin the more likely the consequences of this adultery will begin to go away as well. If he reconciles with his wife or at least apologizes so they can be on speaking terms, perhaps he can move back in or at minimum she will allow him to see the kids more often, thus some of the consequences will begin to fade the more the man returns to God.

Or in a different circumstance, a husband might commit adultery but never be forced to move out, he sees the kids just as much, and he experiences no financial consequences relating to the adultery. In this way he was spared of some consequences.

Biblical Punishment and Discipline in Parenting

Perhaps one of the best places to look when it comes to the biblical differences between punishment and discipline is Christian parenting. While the following advice is aimed at parents, it can be applied to anyone who is in authority or is seeking to help someone living in sin. Pastor Rick Warren states:

The attitude behind punishment is anger. The attitude behind discipline is love. . . . God doesn’t want you to punish your kids. He wants you to discipline them. In fact, when you correct in anger, it always producers one thing: resentment. What God says to do is to correct while looking toward the future, making sure the mistake won’t be repeated. Focusing on the future is redemptive, not destructive.

The Bible says in Proverbs 19:18, “Correct your children while there is still hope; do not let them destroy themselves” (NCV). You are setting your kids up for failure if you don’t correct them.”

When it comes to the differences between punishment and discipline in parenting, Chip Ingram says:

The idea of punishment implies repaying someone with what he or she deserves. That’s the antithesis of the gospel. Punishment produces a child laden with guilt and determined to get out from under it, and Christ likeness is never the result. An effective parent has to learn the difference between punishment and discipline.”

In summary, to lead well and love well, we must know the biblical differences between punishment, discipline and consequences.