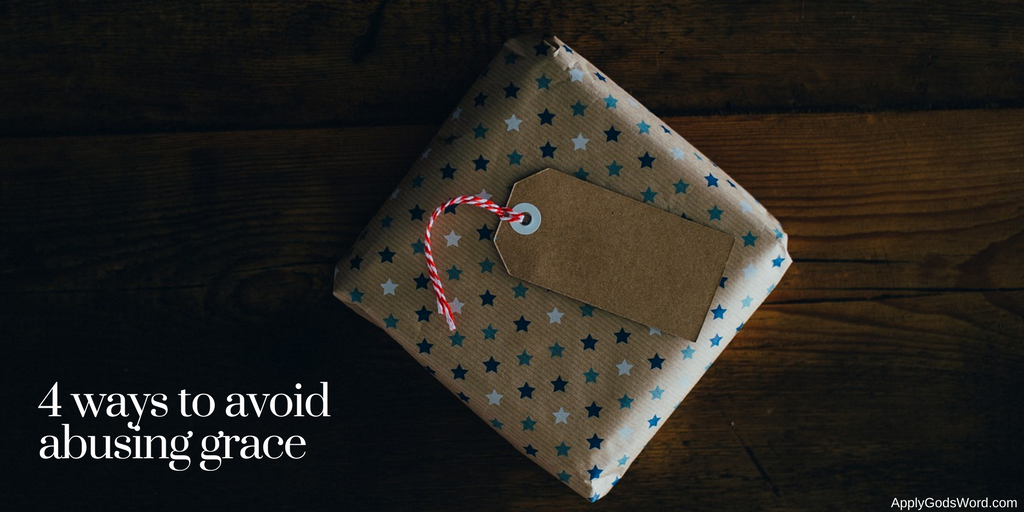 If you were forced to explain the difference between Christianity and every other religion that has ever existed, you could do so in many ways, but also with just one word, “grace.” Grace is God’s gift. Grace is undeserved. Everything good God gives us, including our very salvation, is through Jesus Christ and then given to us in grace. Grace, however, can be abused so easily.

When we over emphasize one truth in the Bible at the expense of other truths, heresy is not far behind. Perhaps worse than theological heresy is the affects abusing grace will have on our relationship with God.

So here are four ways we commonly abuse grace which we can resist through commitment to the full truth as revealed in the whole of Scripture.

1. We Are Abusing Grace When We Feel Free to Sin More

We sinned, we deserved death, but God sent Jesus to offer us grace (Romans 6:23). And even after we accept this gift and become a transformed person (a Christian), God continues to cover us with grace when we break his commands. For as Romans 5:20-21 explains:

Now the law came in to increase the trespass, but where sin increased, grace abounded all the more, 21 so that, as sin reigned in death, grace also might reign through righteousness leading to eternal life through Jesus Christ our Lord.”

Abusing grace occurs when we read Bible verses like this and then feel free to sin more. Grace is not the freedom to sin. Grace is the freedom to choose not to sin. Justification is always connected to sanctification. After Paul explains the truth of God’s endless grace, he gives us Romans 6:1-3 so that we will not abuse grace:

What shall we say then? Are we to continue in sin that grace may abound? 2 By no means! How can we who died to sin still live in it? 3 Do you not know that all of us who have been baptized into Christ Jesus were baptized into his death?”

If we abuse grace by sinning more when we think we have been covered by God’s gift of salvation, this is evidence we have not received grace at all.

2. Grace Is Abused When We Complain About the Consequences of Our Sinful Actions

While God’s grace saves Christians from the punishment we deserve, it does not always save us from the consequences of our sins and grace never saves us from the discipline God lovingly gives us in response to sin.

Not everyone will use these three words with the definitions I am about to give, but I believe there is a difference between punishment, discipline, and consequences.

It is an abuse of grace to assume that God has promised to rescue us from all three of these results of sin. God only promises us that grace will save us from the punishment and penalty of our sins (Romans 3:21-23, NLT).

It might feel like punishment in the moment, but when we receive God’s discipline, our lives will change through his grace (Hebrews 12:5-6).

The point here is that if we get mad at God because we thought grace was an escape from discipline and consequences when in fact the Bible only states it is an escape from the penalty of sin, we are abusing grace.

3. We Abuse Grace When We Remove Rules for Society

There is a difference between an individual relationship between two people and the relationship each individual has within society. Often times, in a spirit of graciousness, people want to remove the consequences, punishment, and discipline for people’s behavior. To do this on a personal level is acceptable. But to stretch the biblical idea of grace over into society is unbiblical and often an abuse of grace.

For grace to be grace it must be given by the offended person. No one has the right to remove the penalty for sin other than the person wronged. Grace is abused when it is forced rather than given. We cannot force people to give offenders grace and we should not make decisions for society as a whole by offering “grace” to those who are a threat to the public.

To hide the crimes of someone, to give sentences that hurt society, or to enable people’s abusive behavior is not an extension of biblical grace. There must be rules in society for the safety of all. To offer “grace” to someone when this will potentially be harmful to others is not wise. God supports rules for society (Romans 13:1-7) and to be gracious does not mean we must put others at risk for the benefit of one.

To have a lawless, policy-less, and accountable-less society in the name of grace is a warped view of God’s intentions and an abuse of biblical grace.

4. We Abuse Grace When We Ignore God’s Law

Do not think that I have come to abolish the Law or the Prophets; I have not come to abolish them but to fulfill them. 18 For truly, I say to you, until heaven and earth pass away, not an iota, not a dot, will pass from the Law until all is accomplished. 19 Therefore whoever relaxes one of the least of these commandments and teaches others to do the same will be called least in the kingdom of heaven, but whoever does them and teaches them will be called great in the kingdom of heaven. 20 For I tell you, unless your righteousness exceeds that of the scribes and Pharisees, you will never enter the kingdom of heaven.

The point of grace is not only to free us from the penalty of sin (which is actually the point of mercy) but to empower us for righteous living:

What Does the Bible Say About Abusing God’s Grace?

In summation, anytime we sin more, repent less, obey God less, have laws which promote societies with less morality, make void God’s commandments – anytime we disobey what the word of God actually says and we do this under the guise of grace, we are actually abusing grace.