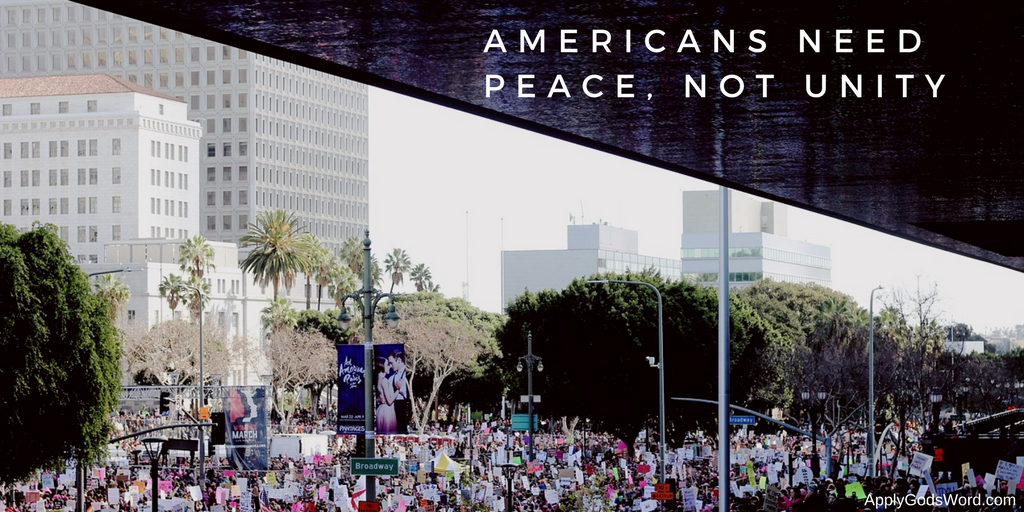 As a thirty-one-year old, these are by far the most conflict-ridden times of my life. Regardless of the network or political persuasion, the word that seems to come out of every news anchor’s mouth to define these days is “divisive.”

Unless they are extremists, the next word that usually follows is “unity,” coming in a phrase such as, “Well I think we can all agree we are in need of unity in this country.” The last thing I’m here to do is challenge the benefits of unity or to diminish the seriousness of the division in this country right now. It’s real, it’s raw, it’s painful, it’s affecting real people, it’s hurting people’s lives, it’s about serious life and death situations, and there is absolutely a problem in the US right now that needs to be solved.

But my goal here is not to dissect or define the problems we are facing. My aim in this article is not to offer solutions. Rather, I simply want to talk about the importance of knowing the difference between “unity” and “peace.” I’ll be coming at this from a Christian’s perspective, but I don’t think you need to be a Christian to benefit from knowing the differences between these two states of being.

Unity Is About Agreeing, Peace Is About Respecting

I’m not one to debate the meaning of words very often. I find people use words very differently at times, therefore to really understand what someone means you must keep each word in the context it was originally spoken.

So I know the way I am going to define unity and peace might be different than you. When you say “unity” you might even mean the exact same thing that I mean by “peace.” Therefore my goal here is not simply a vocabulary lesson but rather to highlight two different ideas which I believe “unity” and “peace” represent.

Unity is about agreeing, it’s about being on the same page, it’s about having the same beliefs. As one common definition puts it, unity is “the state of being united or joined as a whole.” Unity is morally neutral. What I mean is that people can be unified over good or bad things. The fact that they are unified has no bearing on the morality of the object or topic they are being unified over.

Peace, on the other hand, is not about sharing ideas, beliefs, or being joined as a whole. One common definition of peace is “freedom from war or violence.” Peace is about respect, it’s about a lack of danger, it’s about giving people freedom to live in ways they choose (as long as their freedom does not infringe on the freedom of others).

Peace is not morally neutral, for as Romans 12:18 states, “If it is possible, as far as it depends on you, live at peace with everyone.” There will be times when peace is not possible. When others’ lives are in danger because of an enemy, we are not called to live at peace with that enemy. I’m not proclaiming pacifism. But if peace is possible and you refuse it, you are disobeying God.

The Bible Calls for Peace Amongst Disunity

Unity and peace are not synonymous. There can be disunity and peace at the same time. It’s an immature belief to assume that to have peace you need unity. One of the main calls of Jesus was to treat people with respect regardless of whether they deserve it or not (Matthew 5:38-48).

We Can Want Unity, But We Must Always Remember We Need Peace

Again, I’m not here to offer solutions right now. Rather, I think it’s just important to first define what the aim of a solution should even be for America. Are we really going to work to make everyone think the exact same and believe the same things? Or should this country be defined by its freedom to be diverse?

Freedom and diversity are what make this country amazing to me. While I would want people to be unified over the things I believe (because like everyone else I believe my beliefs are right) I know this is not going to happen because the Bible says it won’t (John 15:17-19).

So while I want unity, I know that to retain the freedom’s I enjoy and to believe whatever I want, there must be disunity. If I want to be free to think and believe whatever I want, others must be free to disagree with me. But I also know to retain this freedom our disunity must not overflow into violence and disrespect. So while I want unity, what I know we all need is peace.

People who don’t believe in Jesus are not going to believe the same things as me, they are not going to view right and wrong the same as me, and they are generally going to view the world much different than me because faith in Jesus is an all-consuming belief that shapes all my other beliefs as well. It would be impossible for us to be unified without one of us compromising on our core beliefs. While I know I can never be unified with some people, it must still be my goal as a Christian to be at peace with all people so far as it depends on me (Romans 12:18).