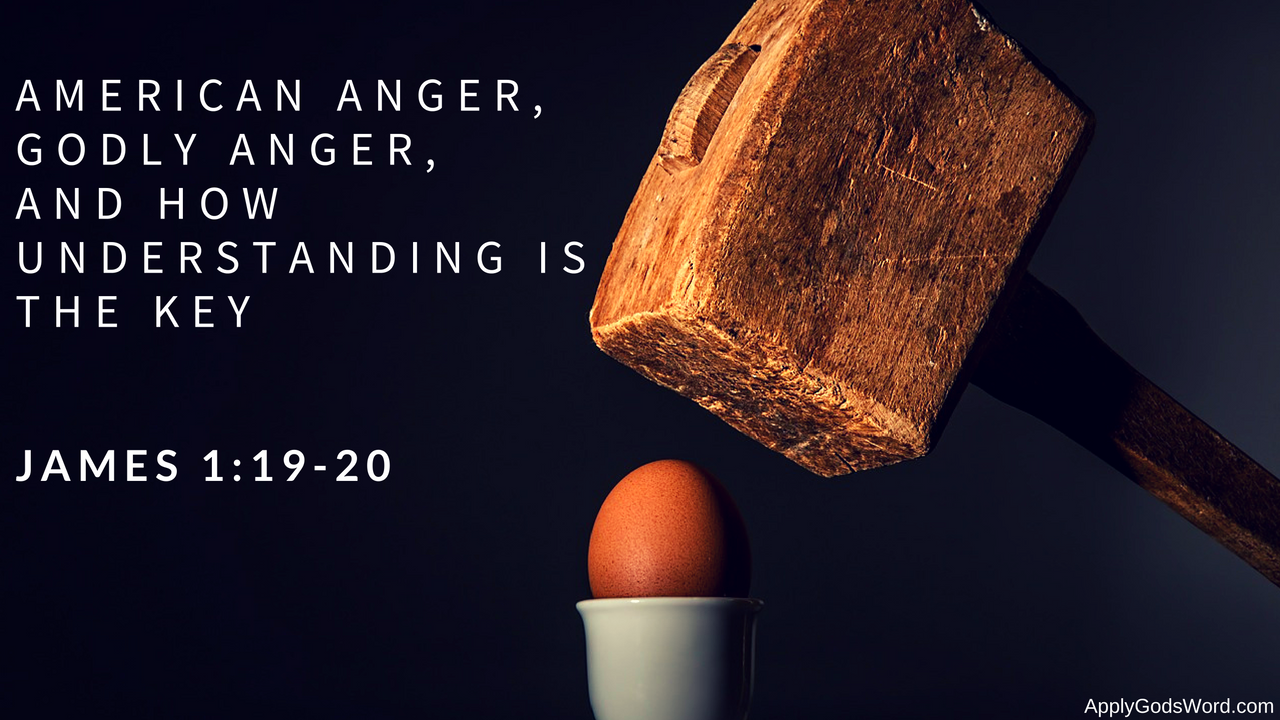 “Know this, my beloved brothers: let every person be quick to hear, slow to speak, slow to anger; for the anger of man does not produce the righteousness of God.” – James 1:19-20

What does the Bible say about anger? It’s a poignant question considering the state of American affairs right now. I’m sure you’re as sick of talking about politics as I am after one of the most brutal Presidential elections in recent history, so I won’t turn this into another online vent sessions – God knows there’s enough of those at this moment in time.

But people are angry right now, on both sides of the political ticket and the ideological spectrum. So what does the Bible say about anger and bitterness? Where does anger come from and how can we manage it? Is trying to manage anger even biblical? Can we be angry without sinning?

The Bible says a lot about anger, so we won’t be able to cover it all here. But what follows is some practical pointers the Bible gives us which may help us deal with all the anger in the air these days.

The Bible Says Anger Is Rooted in a Lack of Understanding

A while back I purchased a computer program which was supposed to help make graphic design super easy. Since I am a Bible teacher and writer at heart, I thought this would be a great purchase to help me in my blogging. Boy was I wrong.

The tutorial video on how to start a new document was five minutes long all by itself . . . just to open a new document! The guy teaching the video sounded really smart, but also like he rarely interacted with normal people. A few hours into trying to learn this program, I was really frustrated, annoyed, and just plain mad. While wasting my money and time was certainly adding to my emotions, the thing that most fueled my anger was my lack of understanding. This programs was so confusing, I just couldn’t understand it! (Mark angry [beating chest] . . . .)

The Bible explains a lack of understanding is deeply connected to sinful anger. As I’m sure you’ve experienced, misunderstanding someone usually leads to frustration. We don’t naturally like people we don’t understand. And on the flip side, we usually become great friends with those people we understand and naturally connect with. We like people who are like us because we can understand people who are like us. Different often translates to distrust, and a lack of trust only adds to being justified in our anger. 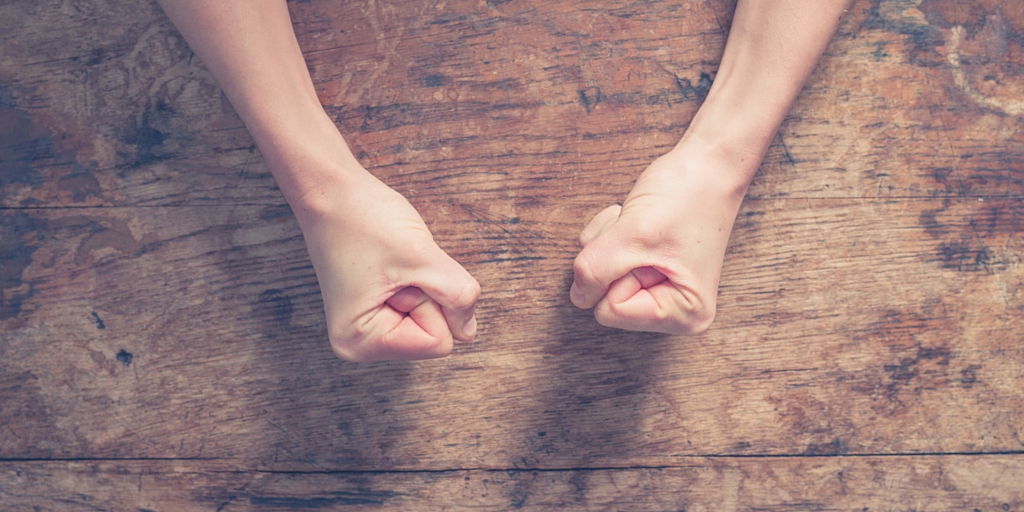 Perhaps there is so much anger in the air right now because there is so little understanding between different groups of people. When we don’t take the time to truly understand the other side, the Bible implies we will become angry.

Understanding someone doesn’t mean you agree with them. So even when we wholeheartedly disagree, we can choose to understand the way others think and process, which will then help us remain in control and not become so angry.

The Bible Says the More You Understand Someone, the More Understanding You Will Be Towards Them

The Bible says “Good sense makes one slow to anger, and it is his glory to overlook an offense” (Proverbs 19:11) and “A fool gives full vent to his spirit, but a wise man quietly holds it back” (Proverbs 29:11). One quick read through the Gospels and it won’t be hard to see how angry the foolish Pharisees were at Jesus because they lacked biblical sense.

To the Pharisees, Jesus was the guy who spoke in parables and talked about the Scriptures in a totally different way, “When Jesus went outside, the Pharisees and the teachers of the law began to oppose him fiercely and to besiege him with questions, waiting to catch him in something he might say” (Luke 11:53-54). Notice they opposed him “fiercely,” attacking him with “questions.” Again, these Bible passages about the Pharisees are showing the link between a lack of understanding and anger.

Matthew 15:12-14 states, “Then the disciples came to him and asked, ‘Do you know that the Pharisees were offended when they heard this?’ [Jesus] replied, “Every plant that my heavenly Father has not planted will be pulled up by the roots. Leave them; they are blind guides. If the blind lead the blind, both will fall into a pit.”

The Pharisees where offended by Jesus because they were blind to his teaching, blind to the truth he was proclaiming. They just didn’t understand this guy, and so they tried to kill him in their anger. Likewise, we won’t be understanding towards people if we never take the time to try and understand them. Foolishness is always a prerequisite to sinful frustration.

The Bible Says We Can Be Angry Without Sinning

Jesus understands us completely. Perhaps this is one of the reasons we cannot frustrate him like we do to those who don’t understand us. Jesus is the most understanding, wise, and loving person ever because he is God and man, having the knowledge of God and the experience of a man (Hebrews 4:15).

Jesus has lived it all, knows it all, and therefore has an understanding of all – which only adds to his ability to love all without sinning in anger. Therefore, if we hope to overcome our anger and love like Jesus, we must seek spiritual understanding like Jesus.

But just because Jesus was not easily angered does not mean he did not have a righteous anger. The Bible says that people can be angry and still not sin, just like God can be angry and not sin.

Be angry and do not sin; do not let the sun go down on your anger, and give no opportunity to the devil.” (Ephesians 4:26-27)

“Know this, my beloved brothers: let every person be quick to hear, slow to speak, slow to anger; for the anger of man does not produce the righteousness of God.” (James 1:19-20)

“The LORD is merciful and gracious, slow to anger and abounding in steadfast love.” (Psalm 103:8)

So the Bible does not say that all anger is sin. God is slow to anger, but that does not mean he never gets angry. When injustices happen, there is a righteous place for anger, but we must not sin in anger. Losing control and being disrespectful to our fellow humans in anger is when sin happens.

Jesus became angry during his time on earth (Luke 9:41, John 2:12-25) but he never lost control. He understood everyone so well, therefore he never grew frustrated out of confusion. In these days of anger, may we seek to be like Jesus: understanding, compassionate, slow to anger, and in control when we express righteous anger over the evil we see in the world. 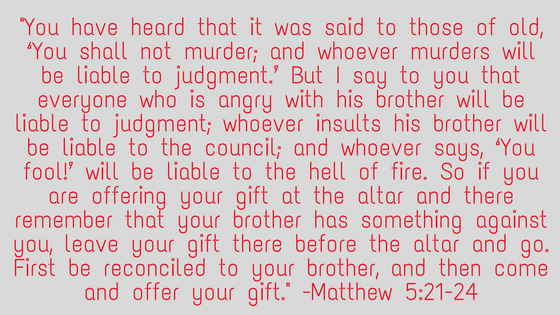