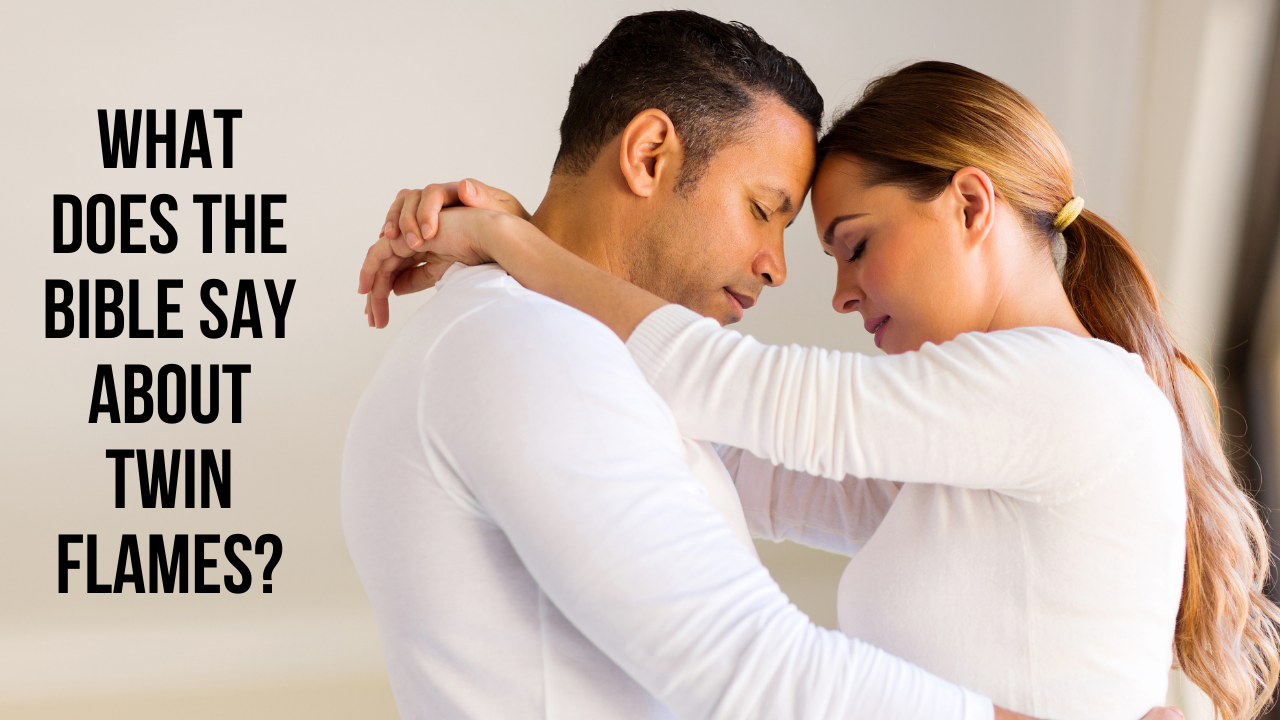 As many of you know, I do believe in the concept of “the one.” But I use that phrase very differently than most people. All I mean by “the one” is the person God has planned for you to marry. Because I believe God is sovereign and actually is in control, I believe even our marriages are in God’s hands. Of course this raises all kinds of questions about man’s free will, but I’ve already answered those questions in my article called What Does the Bible Say About The One?, so feel free to read that for more information.

But what about twin flames? Is it biblical?

What Do Most People Mean When They Use the Phrase “Twin Flame?”

From the research I’ve done, the concept of a “twin flame” seems to be a very subjective idea that emphasizes people’s personal experiences. Some people define it one way and others in a different way. There is no central text or authority that clearly defines “what is a twin flame?” Some say examples in Scripture are couples like Adam and Eve, Ruth and Boaz, or Isaac and Rebekah, but nowhere in Scripture does it mention “twin flames.” These were simply married couples in the Bible. So what follow is simply my summary of what I felt most people were saying when they used the phrase “twin flame.”

I’ve heard people define “twin flame” as the person who is yourself but in another body. They say it’s like looking at a mirror and seeing more of yourself in this person than in anyone else in the world. Everyone I researched who talked about twin flames emphasized that it is different than a soul mate. A soul mate is simply the person you feel completes you, whereas a twin flame is someone who actually shares the same essence as you. Many people say that one flame is female and the other is the male, but at one point you were actually just one flame.

People say when you meet your twin flame it is a very immediate and intense connection, thus your life will never be same after you meet this person – kind of like “love at first sight” but more powerful.

Another emphasis that seems to appear when people talk about a twin flame is the messiness of the connection. Unlike a traditional relationship that has normal boundaries and expectations, it seems people who believe in a twin flame say that this relationship is less controllable and is actually meant to disrupt the traditional meaning of a relationship.

This is where the “flame” part of the name comes it. This relationship is hot burning and forces you to constantly question your previous understanding of relationships. It can be so disruptive that people often pull away from their twin flame because they can only take the intensity for so long before needing a break. But then when they are ready, the pair comes back together because ultimately they can’t stay apart. There is always an emphasis on “energy” when talking about twin flames. This energy keeps you together even when there is physical distance.

Lastly, there seems to be an emphasis on reincarnation being associated with the idea of a twin flame. People often say that this connection with your twin flame is a very old connection that even spans into past lifetimes.

What does the Bible say about twin flames? So is this biblical? No. Here are 4 reasons Christians should not believe in the idea of a twin flame.

1. Self-Control Is a Fruit of the Spirit

Again, there seems to be an emphasis on a lack of control associated with a twin flame relationship. I even heard one person say that twin flames actually repel attachment, so when you try to relate to your twin flame through the normal rules of relationship, this causes chaos.

If you are reading between the lines, it sounds like many people who believe in a twin flame may be advocating for a type of “open relationship” type of situation where it’s not seen as cheating when you have other sexual partners, but rather it’s expected. So your twin flame is not necessarily the person you will have a committed relationship with. Rather, they are the person you have the strongest, most uncontrollable connection with.

Anything that causes you to be less controlled over yourself is not from God.

2. Real Relationships Are Not About “Energy.” They Involve Observable Commitment, Respect, and Love

It’s clear that the teachings around “twin flames” are rooted in New Age ideas and mysticism. From a biblical perspective, however, we can say that teachings that emphasize spiritual truths that contradict Scripture are actually from demons (1 Timothy 4:1-2).

Contrary to a mystical, hard-to-define, and overly spiritual connection between two souls, the Bible emphasizes a more holistic relationships between men and women. In other words, the Bible does emphasize the spiritual realm but it’s always connected to the physical realm. The relationship between people, according to the Bible, should be marked with tangible examples of love, commitment, and respect rather than a vague “energy” that connects two people in a mystical way. As Romans 12:9-13 teaches:

Let love be genuine. Abhor what is evil; hold fast to what is good. Love one another with brotherly affection. Outdo one another in showing honor. Do not be slothful in zeal, be fervent in spirit, serve the Lord. Rejoice in hope, be patient in tribulation, be constant in prayer. Contribute to the needs of the saints and seek to show hospitality.”

Really, the “twin flame” idea seems like an attempt to justify idolization. It’s just an over spiritualized, New Age teaching meant to make you feel good about the sin of infatuation. It justifies relationship idolatry. It’s not healthy.

3. Transformation Comes Through Jesus, Not a Twin Flame

As explained earlier, those who believe in a twin flame say that the purpose of this connection is different than the purpose of a soul mate. While a soul mate is really about loving and enjoying a relationship in a more traditional sense, they say a twin flame comes into your life to disrupt you in order to transform you.

According to Scripture, however, any man-made method of transformation just ends the same old way. The Bible says that our issue is not about thinking wrong, doing wrong, or not being developed enough yet. Rather, the Bible says the problem is much worse. We are literally born with a sin nature, and when we grow, this sin nature grows, giving birth to sin and death in our lives (see Romans 3-6). Therefore the only real solution is to be born again (John 3:16). If you and me are the problem, we cannot be the solution.

As 2 Corinthians 5:17 states, “Therefore, if anyone is in Christ, he is a new creation. The old has passed away; behold, the new has come.” The false idea of a twin flame distracts us from the centrality of Christ – our only true hope for transformation.

4. Reincarnation Is Not Biblical

The Bible says that when you die, you either go to heaven or hell (2 Corinthians 5:8-10, Matthew 25:26). If we all were reborn and got multiple chances to live on earth, there would be no need to be saved from your sin since we just would keep getting more and more chances.

Some people point to the connection between Elijah and John the Baptist as evidence of reincarnation. But if you actually read what the Bible says when it mentions these two, it’s clear Jesus was referring to their calling and purpose (Luke 1:17, Matthew 11:14). Additionally, Elijah never died since he was taken up to heaven (2 Kings 2:11), and Elijah appeared with Moses to visit Jesus while on earth (Matthew 17:11-13). Thus, even using logic associated with reincarnation, John the Baptist being Elijah reincarnate would make no sense.

Any teaching that is rooted in the false idea of incarnation, like the teaching of a twin flame, is unbiblical.

As Christians, we should reject this idea of a twin flame. However, I do believe the Bible points to the idea of “the one.” For more on that topic, feel free to read my article called What Does the Bible Say About The One?