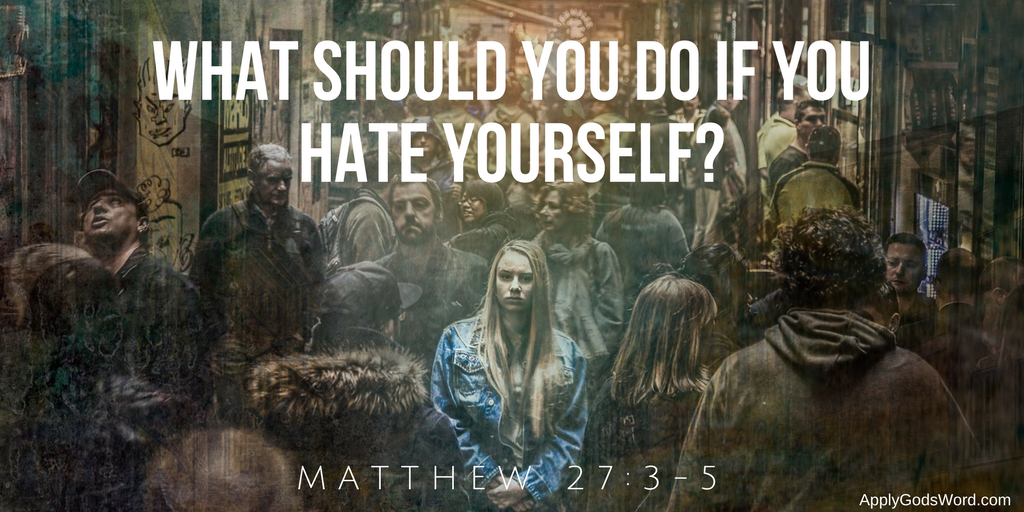 First off, if your hatred for yourself is causing feelings or thoughts of suicide, please speak with a pastor, counselor, or even call 911 if you feel endangered by yourself. This article is not meant to be clinical or professional advice. I’m simply here to offer a biblical perspective on what you should do if you hate yourself.

You Are Called to Love Yourself, Not Hate Yourself

Christians are called to self-sacrifice, picking up our crosses, dying to self, and a whole host of other things which can make us feel a bit uneasy when we start talking about “Loving yourself.”

“In this same way, husbands ought to love their wives as their own bodies. He who loves his wife loves himself. 29 After all, no one ever hated their own body, but they feed and care for their body, just as Christ does the church . . . .” (Ephesians 5:28-29)

So we can see that having a healthy love for yourself is biblical and right. In the verse above it states, “no one ever hated their own body.” This does not mean there has never been anyone who hated themselves or neglected their own needs. Rather, it means this is not normal. Self-hatred is not natural. Something has gone terribly wrong if you have begun to hate yourself.

Why do some people hate themselves?

People Hate Themselves for True and False Reasons

I think people hate themselves for two reasons. You could hate yourself because you have an accurate understanding of your very real flaws and past sins. If you’ve done something heinous to another human, there are only three responses you can take: Receiving God’s mercy, denial, or self-hatred. Receiving God’s forgiveness and redemption through the gospel is the best option.

But no one can live under the shame of their own sin. All humans have to cope somehow. Denial is usually the first trick, “I’m really not that bad. I have a mental illness, that’s why I did that. Lots of people have done terrible things. I’m no different.”

If people do not repent and receive mercy, and they can no longer deny their own sinfulness, then self-hatred is the only other option. God has put his moral law on the human heart. Our consciences are seared, but they are not completely gone. So even if you have denied your God given conscience, it is still there and thus you know you have done wrong. This causes you to look at yourself with disgust because you know you have done evil.

Again, the world tries to solve their hatred from themselves through denial and by trying to claim what they feel guilty about is not actually wrong. Rather than repent of greed, lust, homosexuality, or anger, we try to tell ourselves these things are not wrong.

But we know they are wrong which is why we need to tell ourselves they are not wrong in the first place. You don’t have to convince yourself giving to the poor is not wrong because our conscience tells us it is good. But when we feel convicted by the moral law God has put on our hearts (conscience), we often just try to deny it. And when we can no longer deny it and we refuse God’s grace, we hate ourselves. Romans 2:14-15 explains:

Indeed, when Gentiles, who do not have the law, do by nature things required by the law, they are a law for themselves, even though they do not have the law. 15 They show that the requirements of the law are written on their hearts, their consciences also bearing witness, and their thoughts sometimes accusing them and at other times even defending them.”

Satan wants to destroy human life. He often does this by feeding us lies that cause us to hate ourselves. If you hear, “God hates you. You are irredeemable. What you have done will cause everyone to hate you.” These are lies and if you believe them you will hate yourself.

So people hate themselves when they believe things about themselves that are ugly and undesirable. These beliefs may be based in truth or lies. Jesus alone is the remedy for either reason for self-hatred as we will discuss in the next section below.

However, while Jesus is the only true cure to self-hatred, we must also note that seeing Jesus can also increase self-hatred at times because when we come close to the light it exposes the darkness in us. If we are in the denial stage and seeking to cope with our flaws through ignoring them and denying them, then we will start to hate Jesus because his presence will make it impossible for us to deny our sins.

When you see how good someone is at basketball, or singing, or leading, or typing, you can then begin to see your own flaws in these areas. I grew up playing hockey. I was always the best on my team. I was the captain on my high school team and we were one of the best programs in Ohio. However, I also played on a travel team when I was not playing in high school. One year we won the state championship and thus went to nationals. Here I played kids who played in higher leagues than high school hockey and I suddenly realized there was a higher skill of hockey than I had never been exposed to. These kids shot harder, passed the puck better, and were just plain more developed than me. Only when I was exposed to a higher level did I realize my own insufficiencies.

Likewise, when we compare our humanness, morality, and goodness to other fallen humans, it is easy to deny our own flaws. They are around the same skill level as us, so our skill seems acceptable. But when we begin to look at Jesus and his purity convicts us, we again only have a few options. We can run away and just ignore him. We can repent and ask him to transfer his purity to us and put our sin on the sacrifice of the cross (2 Corinthians 5:21). Or we will hate him because he is making us hate ourselves more as we see our own flaws more clearly next to his perfections. People often hate Jesus because he forces them to remember their own flaws and they do not like hating themselves. So rather than just hate themselves they hate Jesus for making them hate themselves.

One person who exemplified these things we are talking about was Judas. Judas was constantly stealing and living an evil life (John 12:6). But he remained in Jesus’ presence. To me this is why Judas began to hate Jesus. He felt convicted by Jesus but since he did want to change he hated Jesus for the way Jesus’ purity was making him feel (I’m speculating of course since the psychology of Judas is not revealed in Scripture. It seems plausible though.) In Matthew 27:3-5 states:

Then when Judas, his betrayer, saw that Jesus was condemned, he changed his mind and brought back the thirty pieces of silver to the chief priests and the elders, 4 saying, “I have sinned by betraying innocent blood.” They said, “What is that to us? See to it yourself.” 5 And throwing down the pieces of silver into the temple, he departed, and he went and hanged himself.

When Judas “saw” Jesus he realized “I have sinned.” He did not repent, he could no longer deny his crimes, so he began to hate himself –this is always the only option remaining when denial and mercy are passed over. Seeing Jesus’ innocence highlighted Judas’ own guilt. Judas could no longer deny his own depravity. Since he did not turn to Jesus, he was consumed by his own self-hatred.

Sadly, this is the path of all those who do not turn to Jesus. We can deny our sinfulness for a while. But one day, in this life or the next, we will be able to deny our evilness no longer and thus we will hate ourselves. May we all turn to Christ while there is still time.

What Should You Do If You Hate Yourself?

While people often hate Jesus because in some ways he causes them to hate themselves more because they do not know how to handle the sin that he exposes in them, Jesus is also loved by many because he takes away the reasons (sin) for our own self-hatred.

If you hate yourself for a true reason, Jesus can truly change you. Whatever evil you have done, whatever evil is in your heart, Jesus came to earth to heal, restore, and save you from your own sin (Luke 19:10). To receive the offer of the gospel, you must put your faith in Jesus, accept his grace, and follow Jesus the rest of your life. (For more on this, read How to Be Saved By Jesus.)

If you hate yourself because you believe lies, here too Jesus is the only answer. Jesus is the way, the truth, and the life (John 14:6). When you come into the family of God, he gives you his Spirit and teaches you truth through his word (1 Corinthians 2:12-16). You can only break the lies when you know the truth. When you come to know Jesus, you will know the truth, and the truth will set you free (John 8:32). You will know you are now pure and new because of Jesus Christ (Romans 6:4).

People love Jesus because he saves them from what they hate about themselves. “What should you do if you hate yourself?” If you want to stop hating yourself, you must turn to Jesus and your hatred for self will die when you receive God’s love and you love him in return.