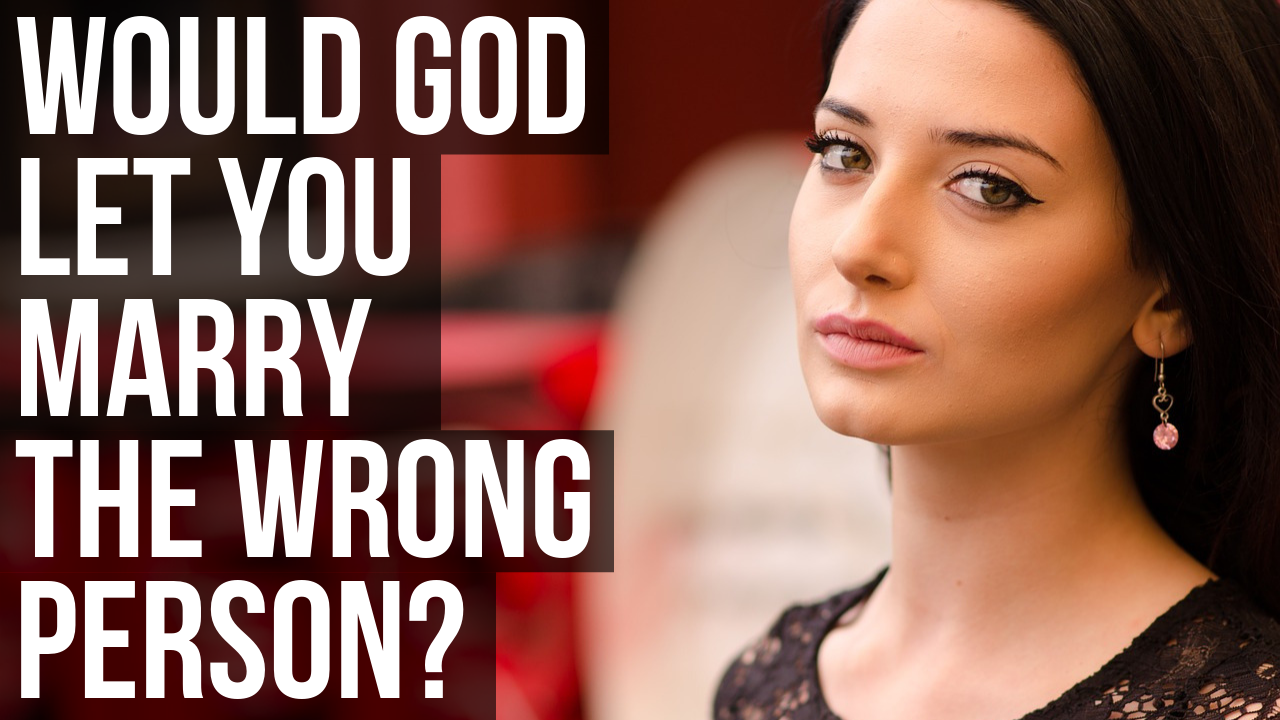 This is one of those articles that you have to read the whole thing because I will be answering this question from different angles. In one sense God will let you marry the wrong person but in another sense God will not let you marry the wrong person. Much of the confusion that will undoubtably occur in the comment section below will be based on language and misunderstanding how we are using phrases to mean different things.

However, I do believe in God’s sovereignty as described in the Scriptures which means I believe that everything, including who you will marry, is ultimately under God’s control. That’s why I have titled my book The One: How to Know and Trust God’s Sovereign Plan for Your Future Marriage.

And as a quick side note, if you are one of the many people who enjoyed this book of mine, you might be interested to know that I just finished writing my newest book called 100 Relationship Signs: How to Know What God Is Saying to You in Singleness and Dating. I’m hoping to finish the editing process and have it printed by the end of May, 2019, God willing. So make sure you subscribe to my channel so you won’t miss the announcement of when this new book is ready.

With that said, here are 4 answers to the question, “Would God let me marry the wrong person?”

Answering this question is notoriously difficult because when you are dating, it is right to question if you are about to marry the wrong person. However, once you actually get married, this is no longer the right question to ask.

It’s impossible for our human minds to fully grasp the power of our sovereign God. But one of the best ways to simplify the questions that come up when you begin to ponder how man’s free will and God’s sovereignty intersect is to simply focus on obeying what the word of God has said. God’s will for your life is ultimately for you to obey his word in your life.

When you get married, God says he wants you to stay married in almost all instances, although there are a few biblical reasons God would allow a divorce as explained in Matthew 5:31-32 and 1 Corinthians 7:10-16.

So would God let you marry the wrong person? If you are single, yes, you could marry someone who God is telling you not to marry. However, if you are married already, God is now telling you that this is the person he wants you to be married to.

Another way to answer this question is to study the truths in the Bible regarding sin. God is sovereign over everything, which means that he allows or causes everything that happens. The Bible is clear that God never causes sin as James 1:13 and 1 John 1:5 teach us.

The reason sin happens in our universe is because God allows humans to make choices. Sadly, in our sin we often take credit for the good God freely gives us in our lives while simultaneously blaming God for the bad we ourselves have produced through our own sinful choices, “A person’s own folly leads to their ruin, yet their heart rages against the Lord” (Proverbs 19:3, NIV).

Another reason I think we have to say that “Yes,” God would let you marry the wrong person in one sense because it is clear that God lets people live unbiblical lives if they choose to do so.

It would be unbiblical to think that God’s grace always nullifies every bad choice you make in life. God will always, always forgive you of any sin you commit if you confess and repent to him. Romans 5:20-21 proclaims, “Now the law came in to increase the trespass, but where sin increased, grace abounded all the more, so that, as sin reigned in death, grace also might reign through righteousness leading to eternal life through Jesus Christ our Lord.”

This truth of God’s abounding grace should produce an eternal hope in us that never goes out. However, God’s grace is not a free pass to disobey the word of God and avoid all consequences for our bad choices. For example, let’s say I slip into the sin of gluttony for a few years, gain a lot of extra weight, and then finally come to my senses and repent. Would God forgive me as soon as I repented? Yes, of course. But does that mean I will wake up the next morning after my repentance with a six pack and a healthy body. Of course not. God would forgive me of my gluttony, but I would still experience the negative consequences for my poor choices. The weight would remain and I would need to start making good choices over a long-period of time to get a healthy body back.

So I believe we simply have to say that God would let you marry the wrong person because God would let you marry an unbiblical person, and how can marrying an unbiblical person be marrying the right person? There are specific commands in the Bible meant to guide our choices in who we marry such as 2 Corinthians 6:14, 1 Corinthians 7:39, and 1 Timothy 2:22. We are free to ignore God’s commands thus we are free to marry the wrong person.

4. While I Believe in the Literal Sense that You Can Marry the Wrong Person, I Believe It Is More Helpful to Focus on Honoring God in Marriage Rather than Trying to Avoid Pain

Personally I struggle with this term “marrying the wrong person” because to me it implies that a hard marriage is the wrong marriage. But nowhere in the Bible does God say that if you follow him he will allow you to enter into an easy, stress free marriage that never has problems. It is unbiblical to think that you are only married to the right person when you are married to someone that is exactly the way you want them to be.

That’s not love. That’s not a marriage. That’s a business deal. It’s like you are saying, “If you act this way and I act that way, we both agree to love each other. Right?” That’s not what God wants a Christian marriage to look like because that is not what Christ’s relationship with the church looks like.

We have to remember that a Christian marriage is actually supposed to reflect the love relationship between Christ and the church as Ephesians 5:22-33 explains. Is the bride of Christ easy to love? Do we, the church, always do what Jesus wants us to do and act the way he desires? Obviously our relationship with God is filled with all kinds of problems, but he still loves us. He would never say he married the wrong bride because of all the issues we have. Rather, God shows his love for us by remaining committed even after we mess up again and again.

Likewise, a Christian marriage is not primarily a storybook romance novel or some cheesy Christian movie where everything always ends up easy and clean after the main character finally prays a magical prayer. That’s not real life and that’s not real love. Read the book of Hosea if you really want to see the type of love God can express through marriage.

Will your marriage likely be much happier and enjoyable when you obey God? Absolutely! But all you can do is obey God. You can’t guarantee what the exact results of obeying God will be in the natural world. And you can’t make your spouse obey God. Thus there is no way to guarantee a pain free marriage no matter who you marry.

So if God leads you to marry someone but that person changes and starts living in sin, this does not mean God has made a mistake. God has called a husband and wife to love each other even when they seem unlovable because that is exactly how Christ loves the church. Just because a marriage is hard does not mean you married the wrong person. It’s a lie to think that to be happy your spouse needs to be perfect. In fact, since the Bible says true joy comes through service, the more love and grace that fills a marriage, the more opportunity for joy one has, for as Acts 20:35 states, “It is more blessed to give than to receive.’”

In summary, I only answered this question and used the phrase “Can you marry the wrong person?” because that’s how people talk and ask this question and I always try to apply the Bible to the questions people have. Personally I think it’s best just to avoid worrying about “marrying the wrong person” and focus more on trying to marry a biblical person so you both can be in a biblical marriage together, flaws and all.