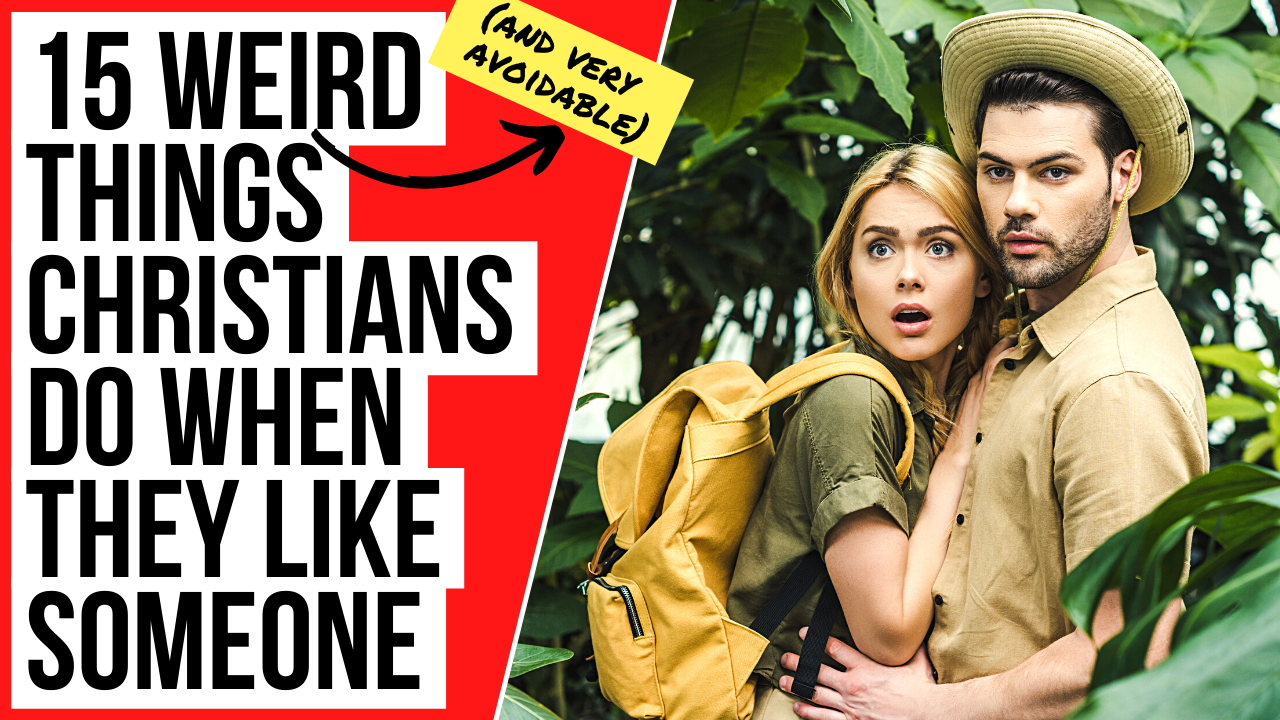 Here are 15 weird things many Christians do when they like someone.

1. Christians Often Ask God About Marriage Before Asking God About Dating This Person

This is strange because this defies how we all normally live our lives. We know God will reveal the distant future by helping us take the next step. So rather than asking God about marrying someone you are not even dating, it makes a lot more sense to ask about dating this person first.

As Ecclesiastes 3:1 states, “For everything there is a season, and a time for every matter under heaven.”

2. Christians Often Pray for Grand Signs to Take Small Steps Forward With the Person They Like

It’s extremely biblical to pray about everything we do in life as Philippians 4:6 tells us to do. But it’s odd to ask God for a huge miraculous sign to take a small step forward with someone.

Ask God about this person, and if you don’t sense God saying no, just go out to coffee and see what happens. Whether it goes great or it’s horrible, the consequences don’t really matter that much so there’s no point to overthink it.

3. Christians Often Only Make a Move Once They Sense They Missed Their Chance

4. Christians Often Feel the Need to Ask Other People for Permission

Whether it be your pastor, a close friend, or even someone on the internet like myself, it’s easy to want to pass the burden of responsibility onto someone else when trying to decide if you should make a move.

Asking for advice is wise, but don’t ask someone for permission to run your own life that God has called you to steward. In the end, God will judge each of us for own decisions, so we shouldn’t let other people tell us how to live.

As Galatians 6:4-5 states, “But let each one test his own work, and then his reason to boast will be in himself alone and not in his neighbor. For each will have to bear his own load.”

5. They Treat the Person They Like the Same as Everyone Else to Hide the Fact That They Like This Person

I think this is odd if you ever want to get married one day because if you treat the person you like in the same way you treat everyone else that you don’t like, then this person will never know you like them. If someone never knows you like them, nothing will ever happen.

6. Christians Often Worry About Ruining the Friendship with the Person They Like

Christian singles of the opposite sex will not be friends forever regardless if they never date. Eventually one of them will get married and then their friendship won’t be the same anyways at that point.

So to me it’s always worth ruining a friendship if you like your friends as more than a friend because you aren’t going to be friends forever anyways. Who knows, by being something more you might then be able to stay together forever on this earth because you will be married rather than two single friends.

7. They Wait to Commit But Then Get Mad When the Other Person Keeps Talking to Other People

If you want someone to change their interactions with the opposite sex, you have to give them a reason to. You can’t expect them to start avoiding potential dating partners if you are not dating them. It’s fine if you are not ready to commit, but you can’t then expect the benefits of being in a committed relationship.

It’s amazing how great of lengths some Christians go to keep an eye on their crush while making sure their crush never notices them keeping an eye on them. If you are interested in someone, don’t be a ninja lurking in the shadows. If you want to get to know them one day, you have to make yourself visible to them.

9. Christians Often Get Stuck Waiting for a Non-Believer to Become a Believer

Biblically speaking, when someone becomes a Christian, they actually become a new person (2 Corinthians 5:17). So if you are Christian who is waiting for a non-believer to become a Christian, you are actually waiting for someone who doesn’t even exist right now.

The odds of you dating and marrying someone who doesn’t exist yet is a lot less likely than you focusing on people who are Christians already and thus who already do exist in reality.

10. Christians Often Live With Regret Even Though There Is Still Time to Do Something

If you like someone, do something about it. Feeling bad for yourself is a sign of passivity and fear because it gives you an excuse to do nothing.

11. Christians Often Take Personal Responsibility for Every Other Part of Their Life Except When They Like Someone

Every Christian knows that to get a job you have to apply for that job. No one just waits for someone to walk up to them and offer them a job. We all know if our car is broken, we have to take it to the mechanic. The mechanic isn’t going to knock on our door and say, “Hey, I noticed your car is broken. May I fix it for you?”

But when it comes to relationships, for some reason many Christians release all their personal responsibility and put it all on “someone out there.” They expect someone out there somewhere to approach them first, reveal their feelings, and do all the pursuing.

It makes more sense to treat relationships like the rest of your life. Yes, pray. Yes, wait on God. But also accept relationships are not much different than everything else in life. They take work and wisdom.

12. They Associate This Person’s Actions With God’s Intentions for Them

Let God speak for himself. Don’t link the actions of a sinful person with the intentions of our loving God.

13. Christians Often Feel Like God Is Silent Even Though Their Bible Is Closed

If you ever say God is silent with your Bible closed, it’s like saying no one is calling you even though you don’t have a phone. Yes, God speaks through his Spirit and through circumstances. But God speaks the most clearly through his word. It’s literally in black and white lettering.

If you want to know God’s will about you and someone, make sure you are assessing this person and your relationship with them by God’s written words to you in Scripture.

14. Christians Often Want Deep Love But They Are So Nit-Picky About Surface Details They Can Never Get to Know Someone

But oddly we often are so nit-picky in singleness we can never get into a relationship that would require real sacrifice. “I don’t like dogs and she does.” “I don’t like cats and he has one.” “His car was so messy.” “I like blonds but her hair is black.”

Okay, I get it. We all want someone we get along with. That’s fair. But in the end, marriage is going to require way bigger sacrifices than the stuff we get hung up on in dating. If you want a deep love one day, you can’t be too nit-picky about surface details.

15. Christians Often Get Stuck in a Prayer Paralysis When They Like Someone

Of course you should pray about someone that you like. But prayer is just one step to take. Prayer is like packing your bags before the trip. But if you just pack your bag and never go on a trip, that’s weird.

Prepare in prayer but try to avoid getting paralyzed in prayer. Ephesians 6:19 (NIV) states, “Pray also for me, that whenever I speak, words may be given me so that I will fearlessly make known the mystery of the gospel . . . .” Paul knew that prayer should result in living for Christ, not just analyzing life for Christ.