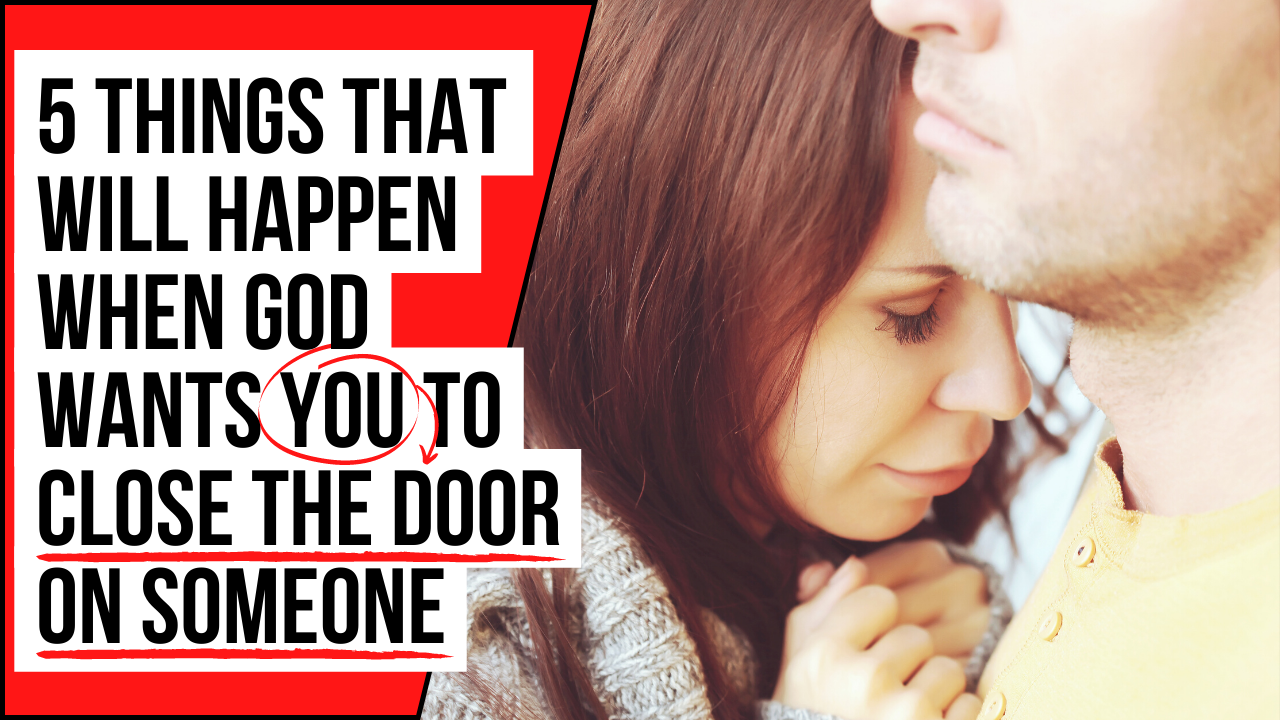 Is God telling you to close the relationship door on someone? Here are 5 things to look for that can help you answer that question.

1. If You Have Been Staring at This Open Door for a Longtime and This Person Is Not Walking Through It, This Is Often a Sign God Is Telling You to Close that Door

Life is a precious gift from God. None of us have an unlimited amount of time here on earth. God wants us to wisely use each minute he gives us. As Ephesians 5:15-16 states:

Look carefully then how you walk, not as unwise but as wise, making the best use of the time, because the days are evil. Therefore do not be foolish, but understand what the will of the Lord is.”

Therefore, it’s safe to say that God would never want you to waste the life he has given you by waiting for something he’s not calling you to wait for. One sign you are waiting for something that he is not calling you to wait for is when there is no valid evidence of it ever happening. Thoughts, hopes, dreams, and feelings are not valid evidence a relationship is going to happen one day if you just keep waiting. Real evidence would be if you and this person are connecting the more time you have together, so you just need more time and thus you should keep the door open.

But when you are leaving a door open and looking at it over and over again even though this person is not even getting close to walking through it, this is getting dangerously close to wasting precious time in your life. And again, God doesn’t want that for you.

Really think about it. Would God put you with someone who is ignoring you? God loves you too much for that. He wants you with someone who wants to be with you. As Proverbs 14:15 says, “The simple believes everything, but the prudent gives thought to his steps.” Don’t believe something that is causing you to waste your life by waiting for a relationship that lacks valid evidence for it ever occurring.

2. If You Actually Want the Door to Close But You Fear the Other Person’s Response If You Close It, This Is a Sign The Lord Is Telling You to Close the Door on This Person

Many times someone will charm their way into your life, get you attached to them, but then they will make your life miserable through drama, manipulation, or verbal abuse. You then want them to leave but you are also attached to them in an unhealthy way that makes it difficult for you to force them out. You know they will put up a fight and won’t just leave easily. So you keep putting it off, you keep letting them infect your life, and you just keep hoping they will leave on their own so you don’t have to make them leave.

If you are in a situation similar to this, just know God does not want this for you. Romance is optional in the Bible. It’s for those who want it. If you don’t want to be someone you are dating or on the verge of dating, don’t be with them. Marriage is different, but when you are not married it’s time to close the door on someone once and for all if you are only leaving the door open because you are afraid of how they will react once you tell them to leave.

Notice what Proverbs 20:11 says, “Even a child makes himself known by his acts, by whether his conduct is pure and upright.” Your fear of this person’s reaction is a sign they are not the one for you. They have shown you through their bad actions in the past that they don’t deserve to be in your life anymore. It’s time to close that door.

3. If the Open Door Is Letting Nothing but Bad Things Into Your Life, This Is a Sign The Lord Is Telling You to Close that Door on Someone

Relationship boundaries are like doors on a house. A door is different than a wall because it can be opened. But a door is different than a giant opening because it can also be closed. You as the owner of the house get to lock the door to keep people out you don’t want in and you also get to open the door for those people you do want in your house.

Problems arise when we have poor relationship boundaries that resemble walls or giant openings rather than doors that can be opened and closed. If your boundaries are unhealthy you will either be a stuck door that never lets any good in or you will be an open door that never closes and thus allows all kinds of bad in. Healthy relationship boundaries allow you to thoughtfully let healthy people in rather than rashly letting just anyone in. As Proverbs 20:25 states, “It is a snare to say rashly, ‘It is holy,’ and to reflect only after making vows.”

Don’t let your past mistake of rashly letting them in keep you from making a good choice now by making them leave.  If someone’s presence in your life is not producing good and is only producing bad things in your life, this is a sign you have a bad boundary with this person. You need to close the door on them.

4. If This Open Door Is Distracting You from the Other Open Doors in Your Life That Are Bringing Good Into Your Life, This Is a Sign God Is Telling You to Close that Door on This Person

Many times Christian singles will say, “What’s the harm in leaving this door open? I can pursue other relationships now but maybe down the line something will happen with this person I’ve been waiting for.” Hypothetically this makes sense. Perhaps some people can actually live this way. But it’s been my experience while working with Christian singles that leaving the door open to one person usually causes you to focus less on other opportunities.

Again, we are just limited beings. Your heart only has so much emotional energy to give. If you are giving your energy away through an open door to someone God does not want you with, you will have less energy for the person God may be trying to match you with. It’s like heating a house. The heat is for those in the house. The open door just lets the heat out. Likewise, your emotional energy is better spent on those in your life rather than on those you wish would come into your life but who are staying outside.

Proverbs 21:25-26 states, “The desire of the sluggard kills him, for his hands refuse to labor. All day long he craves and craves, but the righteous gives and does not hold back.” I bring this verse up to point out the need for hard work. You may be inadvertently refusing to work on what God wants you to work on because you are craving something he doesn’t want for you.

5. If The Door Is Only Open Because You Are Holding It Open, This Is Often a Sign The Lord Is Telling You to Let That Door Close

There will always be some tension in the human mind when wondering, “How much do I need to do and how much should I just wait for God to do?”

In the end, God will require us to take action but he always has the final say. Proverbs 16:33 (NLT) explains, “We may throw the dice, but the Lord determines how they fall.” You will need to walk through the open doors but he will need to be the one who opens those doors. I bring this up here because it’s possible God is not opening a door for someone to come into your life. It’s possible you are holding that door open.

When God is the one truly opening a door, it won’t take endless striving on your end to keep it open. If the door would just naturally close if you stopped trying everything in your power to keep it open, this is often a sign God is telling you to let that door close.