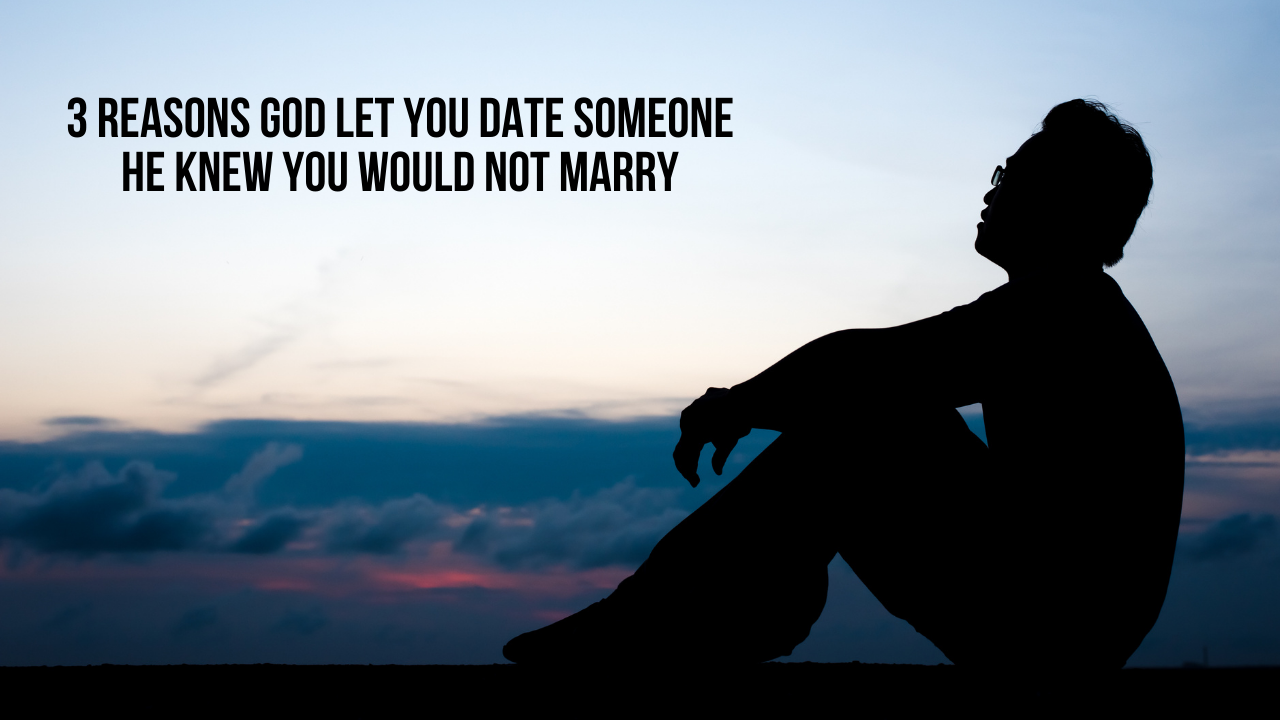 Why would God let you date someone if he knows the future and thus already knew you two would not end up getting married? Here’s 3 possible answers to that question.

1. God May Have Let You Date Someone He Knew You Would Not Marry to Help You Find the Answer to the Marriage Questions You Were Asking Him

While we sometimes wish that God would just look into his crystal ball and tell us what he sees, God often speaks to us through the events and outcomes that occur in our lives. This can be seen in what Jesus said to the disciples in Matthew 10:11-14. He did not give them a list of towns to visit and stay in. Rather, he gave them a process by which to assess each town to know whether or not the Holy Spirit wanted them to stay there.

Dating is best used as a process of figuring out if God does or does not want you to marry someone. Like getting an inspection on a house you are considering buying, the goal is not to convince yourself to buy that house no matter what. Rather, the goal is to properly assess that house to make sure you know what you are getting into before you buy it.

Likewise, dating should not be seen as a process of getting someone to marry you but rather a process by which two Christian can discern what God wants for them. If through dating God shows you that you two should not get married, you have also achieved the purpose of dating just as if you learned that God did want you to get married. The goal of dating is to find clarity about the future. The only failure in my view for Christians is when they date someone they already know they will not marry or they endlessly date each other with no intention of breaking up or getting married.

So one reason God may have let you date someone he already knew you would not marry was because he wanted you to also know this is not the person he wants you to marry.

2. God May Have Let You Date Someone He Knew You Would Not Marry to Help Refine Your Willingness to Follow Him When It Comes to Relationships

As I mentioned in point 1 of this article, it certainly is possible God did actually tell you to date someone even though he knew you would not marry him or her.

But it is also possible God did not tell you to date this person but he let you date this person out of respect for your humanness. What makes humans truly human and not mindless robots is freedom to reap what we sow. God is sovereign and produces the outcomes he wants through our free choices. But he also ordains that we all reap what we sow. As Galatians 6:7 (NIV) says, “Do not be deceived: God cannot be mocked. A man reaps what he sows.”

With this said, it is also biblical to point out that God can stop us from doing things if he wants. Everything that happens God still allows to happen because he has the power to stop or produce whatever he wants. So why did he not stop you from dating someone he did not want you to date?

You’ve probably heard the old saying, “Give a man a fish, feed him for a day. But teach a man how to fish and you will feed him for a lifetime.” That’s why God lets us do things he does not want us to do. If he just stopped us from doing things all the time rather than teaching us to truly listen and obey his voice, then what would be the point of speaking to us at all? In fact, what would be the point of making us at all if he just controlled us like that?

So God may have let you date someone he knew you would not marry to help you be more willing to listen to him in the future when it comes to relationships.

3. God May Have Let You Date Someone He Knew You Would Not Marry to Prepare Your Heart Through Pain for the Pleasure Ahead When He Does Reveal the Person He Wants You to Marry

God loves us too much to spare us of all pain. Unlike a well-meaning doting parent who inadvertently ruins their child because they never allow them any pain or discipline, God is too wise to know what would happen to us if he spared us of all hardships.

After reading countless emails from Christian singles, I am convinced that one of the most powerful and most common ways God brings us back to himself when we stray is though relationship pain. As Hebrews 12:7-11 (NIV) explains:

Endure hardship as discipline; God is treating you as his children. For what children are not disciplined by their father?  If you are not disciplined—and everyone undergoes discipline—then you are not legitimate, not true sons and daughters at all. Moreover, we have all had human fathers who disciplined us and we respected them for it. How much more should we submit to the Father of spirits and live! They disciplined us for a little while as they thought best; but God disciplines us for our good, in order that we may share in his holiness. No discipline seems pleasant at the time, but painful. Later on, however, it produces a harvest of righteousness and peace for those who have been trained by it.”

It’s possible that without the pain from this past relationship you would never be prepared for the coming pleasure of the future relationship God desires to give you for your good and his glory.