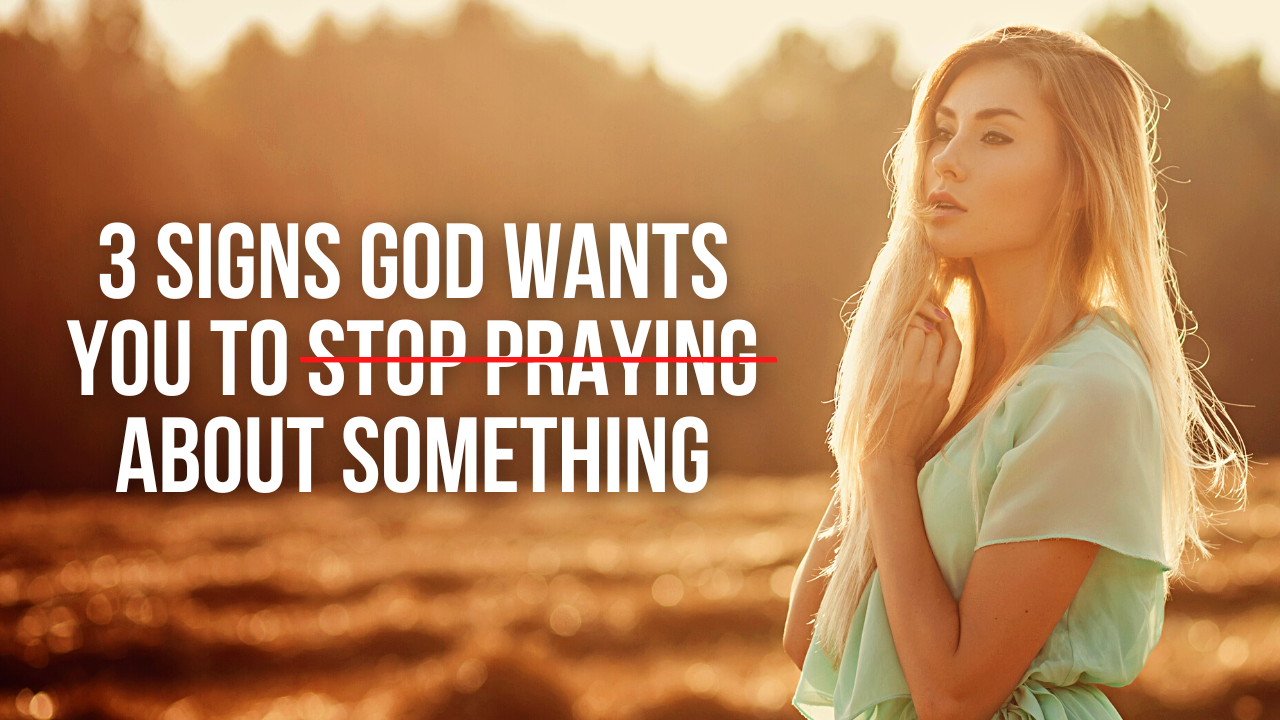 Throughout Scripture, we are commanded to always be praying (1 Thessalonians 5:17, Ephesians 6:18, Philippians 4:6). However, this does not mean God wants us to always keep asking him for one specific thing until he gives it to us. Sometimes God will actually lead us to stop asking for something we have been relentlessly asking for.

Therefore, here are 3 signs God is telling you to no longer pray for something.

1. If God Has Already Given You a Very Clear “No,” You Should Stop Asking About That Thing He’s Said No About

There’s a belief among some Christians that God will move once we finally offer up enough prayers, as though there is a heavenly scale that will one day finally flip over to “Yes” once we weigh it down enough with our prayers. This is not biblical.

Certainly God may lead some people to pray for years or even decades for one particular blessing. I’m certainly not saying that is always wrong to do. That may be exactly what God is telling you to do. But if he does one day answer that prayer you’ve been asking for, it won’t be because you worked so hard for it in prayer. It will be because of his grace and divine timing.

I say all of that because in many cases, people pray and pray and pray because they think God is just waiting for them to beg him enough. If you don’t get a clear no from God, then certainly keep praying if you feel led to. But if God has said no, it’s not right to keep begging because you think God needs you to beg more.

God always does what is most loving (Matthew 7:7-11). If he’s said no to something you want, trust that he’s doing this for your good.

2. If You Have Tunnel Vision Because You Are Asking God to Give You Your Idol, This Is a Sign You May Need to Stop Praying About This

The reason I just said “you may” need to stop praying about this is because sometimes when we have an idol, we don’t need to give up the good desires we have; rather, we just need to confess and repent of the idolatrous reasons we want this good thing.

For example, if you really want a spouse, this is a good desire; and more than likely, God will give you this spouse one day. Marriage pleases God, so God doesn’t want you to give it up if he’s given you a desire to be married (1 Corinthians 7:7). Rather, you need to repent of the idolatry of marriage rather than giving up wanting to be married.

With that said, sometimes an idol can be so consuming in our hearts that it causes us to have tunnel vision. We become unable to focus on anything or anyone besides this one thing or person that we want God to give us. In moments like these, God may lead you to stop praying about this thing you want as a way of repenting of this idol. By no longer praying about this, it can allow you to recalibrate and focus on other things in a healthy way.

3. If God Has Already Answered This Prayer But You Are Overlooking His Answer

Perhaps the most common example for this point would be when it comes to the forgiveness of a particular sin in our past. Many people confess and confess and confess but still feel that God has not forgiven them. This is where we have to accept Scripture and ignore our feelings. Once you confess and repent, the Bible says it’s done (1 John 1:9). You don’t need to keep praying about that.

Or maybe you’re praying that God will reveal if you should marry your boyfriend or girlfriend. Perhaps you’ve been dating him or her for a good amount of time, they are extremely loving, mature in the Lord, and you really enjoy them. Through these signs God is saying, yes, you should marry them. Perhaps you, however, want a vision, a dream, or something flashier to let you know God wants you to marry this person. But since God has already answered your prayed through the biblical evidence in the relationship, you should stop praying about this and get married.

Big picture, sometimes we need to stop praying and start looking for the answer to that prayer. Sometimes God has already granted our prayer request but we’ve missed it because all we are doing is asking him and not looking for the signs he’s already sent.