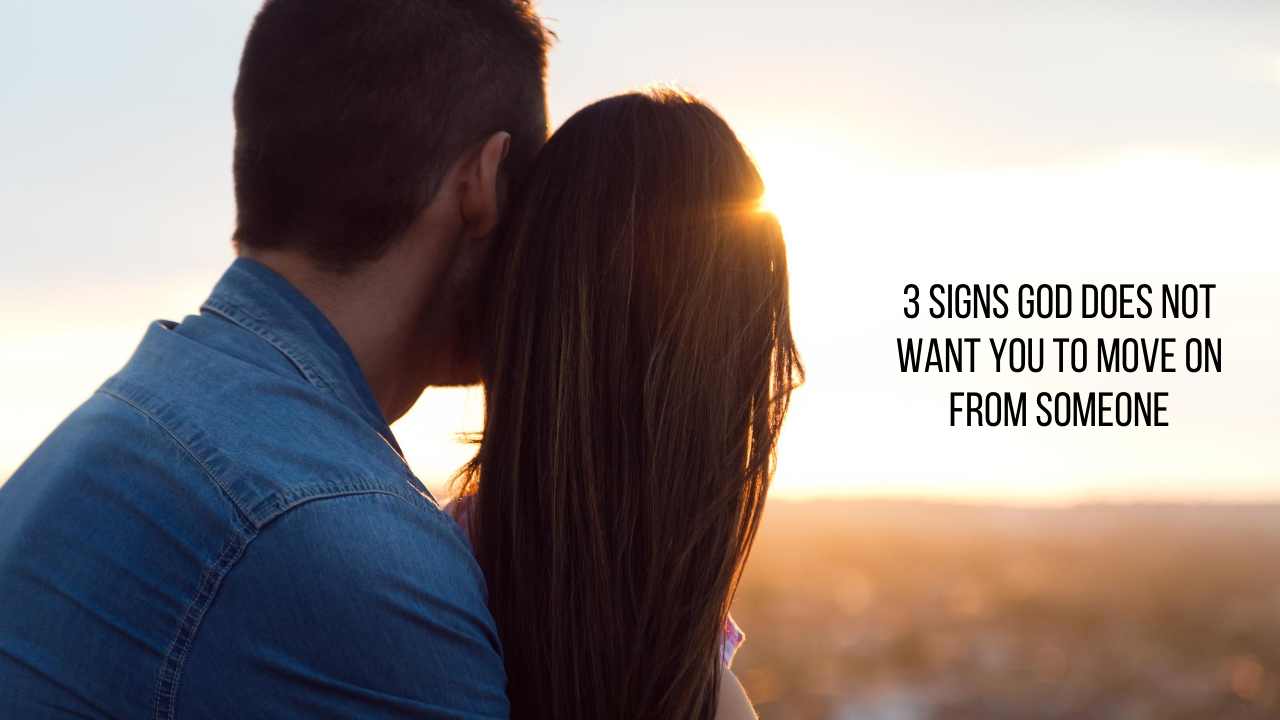 Here are 3 signs that often happen when God is telling you not to move on from someone.

1. If You Are Being Tempted to Run Away Because of Your Own Fears Rather Than the Other Person’s Faults, This Is Often a Sign the Lord Is Telling You to Not Move On From This Person

Before marriage, you should assess someone’s faults in a very practical and biblical way. I’m not saying we should judge people in sinful ways, but that is different than using discernment and assessing whether or not this person is truly living a biblical life that would cause you two to be equally yoked. As Proverbs 12:26 (NIV) explains, “The righteous choose their friends carefully, but the way of the wicked leads them astray.”

Oftentimes, however, a fear arises in the hearts of singles that causes them to want to run away from a great relationship opportunity not because of the faults of this person but rather because of the wounds in their own past. Fear in our hearts can feel very real. It can be extremely controlling. But if we allow ourselves to be controlled by our own emotions that are not rooted in the behavior of the person we are dating or want to date, we will always get stuck missing out on great relationship opportunities.

Again, if your fears of getting hurt are founded on the facts of this person’s true faults and hurtful actions towards you, then those fears should not be ignored. But all too often Christian singles end their relationship with someone or end the possibility of their relationship with this person because they have insecurities and fears inside of their own heart that have nothing to do with this other person.

Don’t assume God is telling you to move on as soon as you feel any fear about this relationship causing you pain. We must be wise, but there is always an element of risk to love. If you always obey your own fears that are not even related to this person’s own faults, you will always be single because those fears will always be there if you don’t deal with them at some point.

2. If You Are Tempted to Move On Because Your Relationship with this Person Is in the Confusing Grey Area and You Are Just Tired of It, This Is Often a Sign the Lord Is Telling You Not to Move On

I can’t tell you how many Christian singles I have talked to who had been emailing me about a relationship they were really confused about to then finally just say something like, “I just couldn’t take it anymore. This relationship was stressing me out too much so I just ended it. I feel so much better now.”

I am in no way saying that this is the wrong choice for everyone. It’s not good to be stressed out and anxious about a relationship because it is so confusing to you. But way too often singles just move on from someone they really liked because they get confronted with some confusion. This is especially true of people who get really excited and anxious right at the beginning of a relationship opportunity. When someone’s emotions are off the charts too early and they can’t stop thinking about this person, one way they deal with this problem is by just ending the relationship. This could be the right option for you, but this can’t always be the option for you if you want to be married one day.

Every relationship goes through an awkward grey phase where the man and woman are feeling each other out. They are both interested, but neither of them wants to express their feelings too strongly yet because neither of them wants to get hurt or scare the other person off. This confusion, this ambiguity, this uncertainty of where this relationship or potential relationship is headed is all very normal. Yes, sometimes it just needs to end if it lingers too long and there is no end in sight to the confusion. But just because you get confused about your future with someone does not mean God is telling you to move on.

Not only that, but we rejoice in our sufferings, knowing that suffering produces endurance, and endurance produces character, and character produces hope, and hope does not put us to shame, because God’s love has been poured into our hearts through the Holy Spirit who has been given to us.”

If we move on too quickly from the trials God allows us to go through, we will miss out on this process of spiritual growth. Oftentimes this same principle is true when it comes to relationships.

3. If You Want to Run from This Person Because They Are Challenging You to Be the Person You Know God Has Called You to Be, This Is a Sign the Lord Does Not Want You to Move On

Sometimes the best people to be around are the ones who challenge us the most. Again, for a relationship to work between a man and woman, there must be mutual respect. One person can’t take the role of the teacher while the other takes the role of a student. That is unhealthy for a romantic relationship.

But sometimes God will put you with a person who will cause you to grow because they will challenge how you have been living your own life. Their ideas about God, dating, and life may contradict some of things you believed before you met them. Your wounds from the past may perfectly clash with their wounds from the past, causing you both to need to deal with these wounds to grow individually and together.

As Proverbs 27:17 explains, “As iron sharpens iron, so one person sharpens another.” This sharpening process is usually painful. When you sharpen a blade, you are literally removing parts of that blade to refine its edge. To make it sharper you have to remove tiny fragments so the metal gets pointed and refined rather than remaining dull and bulky. When our very identity is being sharpened, God will use people to chip away the dull parts from each other so they can both be sharpened. This will be painful, and that pain will tempt you to want to just move on.

But if God is using this relationship to cause major growth in your life, this is often a sign God is telling you not to move on.