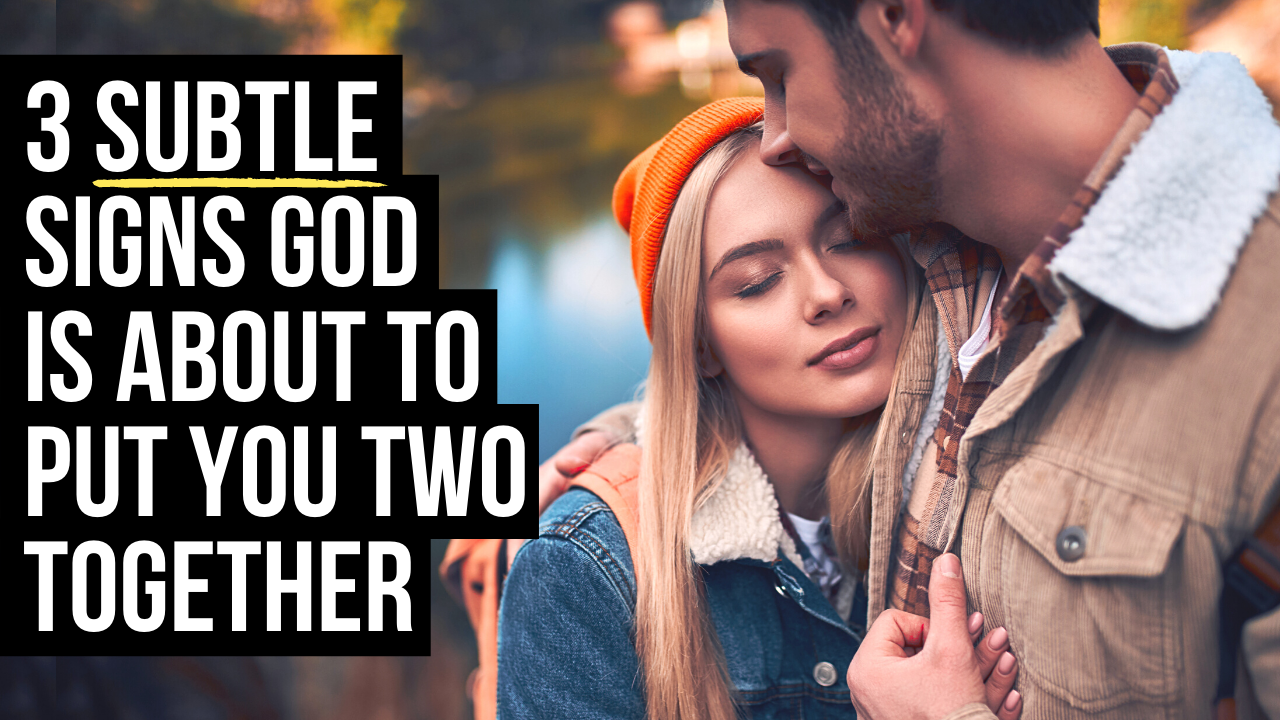 Here are three not so obvious signs that God is actually connecting you with someone that you will date one day.

1. If You Thought You Would Never Date Someone Which Has Now Allowed You to Build a Great Friendship with No Pressure, This Could Be a Sign the Lord Is Actually Preparing You to Date This Person One Day

Ironically, one of the biggest blockers to romance forming is the pressure for romance to form. In other words, when someone has feelings for someone else right away, it puts pressure on the other person to also have those same feelings. Oftentimes this pressure early on causes the whole thing to crumble because when people are not sure, they usually play it safe and just don’t give the relationship a chance. This is especially true of Christians because most of us are focused on guarding our hearts.

This is one of the reasons healthy romance often forms between two Christian singles when the pressure to be romantic is removed. This is actually what happened to Bethany and I. Bethany and I did not think we would date because she is 5 years older than me. This allowed us to form a great friendship that flourished quickly because there was no pressure for us to be anything more than friends early on. But once we became very close friends, it became obvious we would make a great couple and then we started dating. We now just celebrated our 12th year of marriage together.

My point is, it’s often those people that you think you would never date that are the ones God is subtly connecting your heart to. God will often use the lack of pressure between two people who feel like they would never date each other to actually form a bond that will be the bases for their healthy dating relationship one day and often their marriage too.

Proverbs 21:1 states, “The king’s heart is a stream of water in the hand of the Lord; he turns it wherever he will.” Just as God directs the heart of a king as he watches over his kingdom, so too does God direct our hearts as we watch over our lives and relationships.

Don’t be surprised if God directs your heart in a way that you originally thought was impossible. Sometimes God let you think it was impossible for you and this other person to date so that you two could form a bond that would not have formed if there was too much pressure early on.

2. If God Is Using a Mutual Community as the Context for Starting a Connection that Is Growing More and More Just Between the Two of You, This Is Often a Subtle Sign the Lord Is Putting You Two Together

One of the most common ways God puts people together is by connecting them through their mutual involvement in something that they both care deeply about. For instance, it is very common for two Christian singles to join a ministry that they are passionate about but to then form a passion for each other as they serve alongside of one another at that ministry.

Oftentimes God will have you meet someone in the places you go where you were not trying to meet someone. In other words, when groups of people share a common bond or a mutual interest, they come together because of that interest but when they are there they often form bonds and friendships with each other. The same thing happens with romance. You may have not gone to that Bible study, that ministry school, or that mission’s trip for any other reason other than that you care about that topic or mission – but when you are there you will naturally meet other people who are like you. So it’s no surprise that God often subtly pairs couples together through having them meet at places of mutual interest and passions.

3. If Your Connection with this Person is Growing in a Way that Seems Completely Unmanufactured By You, This Is Often a Sign the Lord Is the One Putting You Two Together

There’s nothing wrong with being intentional about trying to date someone. Many relationships will need this intentional pursuit for the connection to be formed. But when God is subtly putting you with someone that you had no idea you would date one day, oftentimes the relationship itself seems to have a mind of its own.

Now, we need to be careful here because I’m not saying you should just let your passions lead you. As Christians we must use our minds to guide our hearts. We must assess people by a biblical standard before dating them or opening our hearts to them in a romantic way. But sometimes God puts two Christians together by allowing their connection to each other to be so natural that it almost seems impossible for them not to date. When the connection between two eligible Christian singles is that strong, dating often occurs in a way that is so unforced the two involved will feel like it almost happened on its own. Notice what Proverbs 30:18-19 (NIV) says:

It doesn’t always happen this way, but oftentimes God puts a man and woman together in such a way that they don’t even fully understand how it happened.

Obviously they will need to talk about it and actually make the choice to become an official couple. Of course there will be challenges, fights, and hard conversations on their road to marriage; but there are times when God subtly puts two Christians together by making their bond so natural that their future together is just obvious.