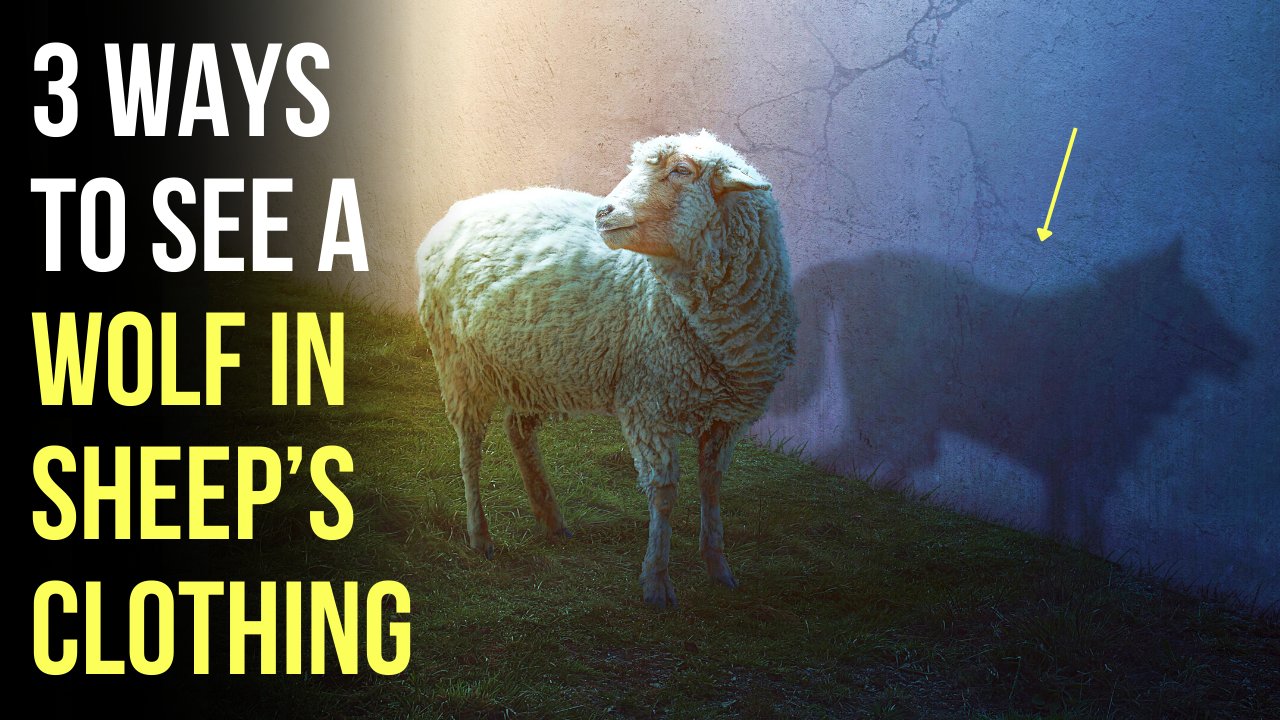 Here are 3 biblical ways to avoid being deceived by a wolf in sheep’s clothing.

1. Don’t Assume the Best Just Because Someone Is in Ministry

Christians are often too nice. We know we are supposed to be kind and loving (1 Corinthians 13:4), but we often misinterpret this call and think we must be naïve and unguarded. Notice what Jesus said in Matthew 7:15-16 (NIV), which states:

Watch out for false prophets. They come to you in sheep’s clothing, but inwardly they are ferocious wolves. By their fruit you will recognize them.”

He didn’t say, “Assume the best.” He said, “Watch out.” Jesus never gives us meaningless warnings. He warns us to “watch out” for false prophets because they aren’t going to be easy to see. He tells us to “watch out” because most Christians aren’t watching out.

You should have no opinion of a spiritual leader until you gather real evidence one way or the other. You should observe their actions, listen to their words closely, and allow time to tell if they are trustworthy or not (Matthew 7:16-20).

2. Notice Who Discord and Disorder Are Following

My point? Anywhere these people go, discord and disorder follow (James 3:17). This is why you should look at someone’s track record in ministry and relationships. Yes, people can change and repent. But when they don’t repent, they keep creating the same problems no matter where they go.

The first few times they cause discord, they will deceive people because they will blame others. But logic says that if one person goes to many groups and has the same issues, it’s not the many groups that are at fault. This person is obviously the common denominator.

Christians are too afraid to ask hard questions. The false prophets shame them and accuse them of gossip whenever they look into the past and ask other people for character references. This must stop. We can’t be afraid to ask questions about negative trends in people’s lives, especially when these people are seeking positions of power in the church. As Paul wrote in Romans 16:17-18, which states:

I appeal to you, brothers, to watch out for those who cause divisions and create obstacles contrary to the doctrine that you have been taught; avoid them. For such persons do not serve our Lord Christ, but their own appetites, and by smooth talk and flattery they deceive the hearts of the naive.”

3. A Wolf in Sheep’s Clothing Won’t Be Able to Confess Their Own Sin and Submit to Discipline

We want our pastors and spiritual leaders to be the best of us, to be an example to follow, and to be further along in their spiritual journey so they can guide us. This is a good desire (1 Timothy 3:1-7, 1 Corinthians 11:1). But, we forget what Christian maturity actually looks like according to Scripture.

Those who claim they never sin are the most immature of Christians, or worse, are not Christians at all (1 John 1:8-10). The mark of a mature saint is not pride and flaunting one’s perfection, but rather it’s their humility and deep awareness of their need for grace (Romans 7:24-25). As 2 Corinthians 11:13-15 explains:

For such men are false apostles, deceitful workmen, disguising themselves as apostles of Christ. And no wonder, for even Satan disguises himself as an angel of light. So it is no surprise if his servants, also, disguise themselves as servants of righteousness. Their end will correspond to their deeds.”

If someone seems too good to be true, they usually are pretending. A wolf in sheep’s clothing will at first appear humble and submissive but over time they will show themselves to be proud, arrogant, and unwilling to submit to discipline.

Here’s a playlist of past videos I’ve done about spotting false prophets: Signs of False Prophets and Evil Leaders in the Church.