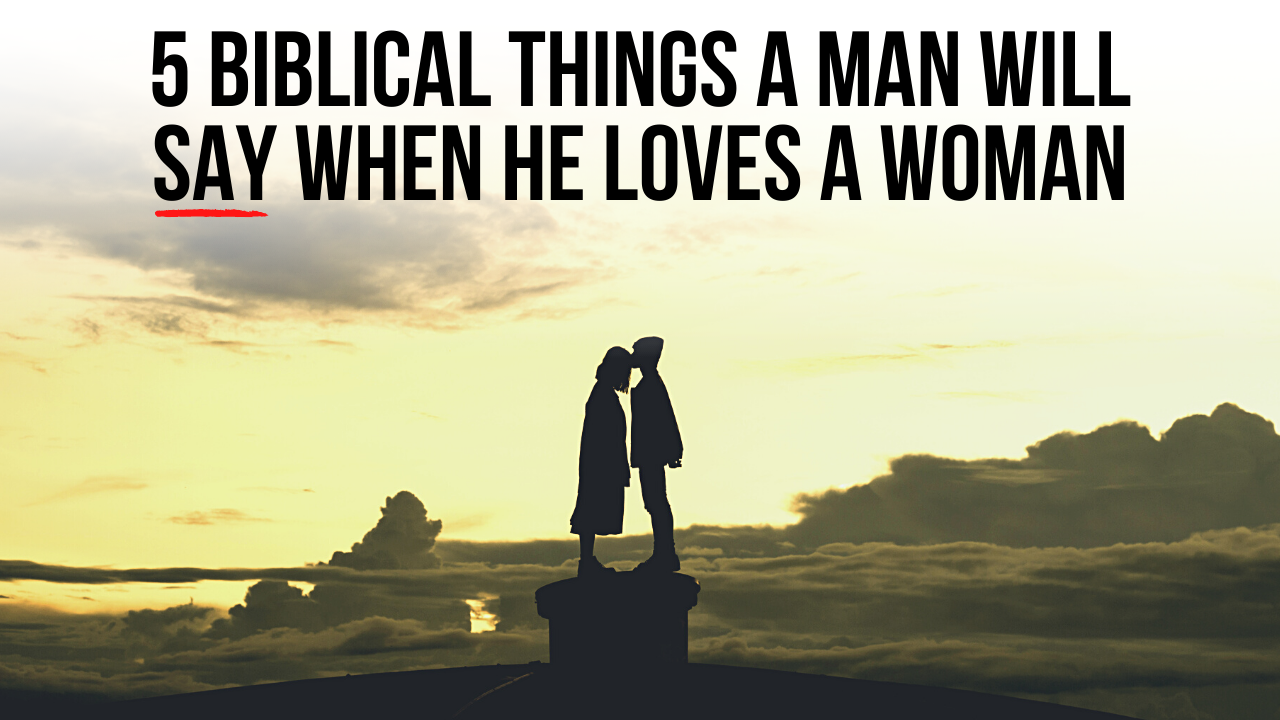 In this article, I’ll be talking about the ideal. No one is perfect. So if a Christian man makes a mistake in one of these areas, I’m not saying he for sure doesn’t love this woman.

I’m simply saying that if a man is seeking to obey the Bible and express his love for a woman in a way that pleases the Lord, he will seek to say and do these 5 things.

1. A Mature Christian Man Won’t Say Anything About His Love Until He’s Ready to Also Back It Up with Actions

Before we can get to the specific things a man will say when he really loves a woman, it’s first wise to state what he will not say.

A man who really loves a woman will be careful with his words. The last thing he will want to do is lead her on, play with her emotions, or say too much which then will increase the temptation to engage in sexual intimacy before marriage.

A woman who has dated many worldly guys may be confused by a biblical man because he won’t be expressing his love verbally too much and too soon like all the other guys she’s dated. But he’s withholding his words because when he says them, he really means them.

The world has spread a lie about true love. People tend to think that when they finally meet the person God has for them and the love is real, that this will somehow mean their relationship will be without any issues. This is just not true.

When a man and woman truly love each other, their love will not erase all problems; rather, it will sustain them through the problems. When a Christian man loves a woman, he will be willing to apologize when he sins and he will be willing to forgive her when she sins (Colossians 3:13, Romans 12:9-10).

3. When a Man Loves a Woman, He Will Say “No” to Other Women

Throughout Scripture, love is always associated with choosing the object of your love over everything else. In love, God chooses a people and sets them apart (1 Peter 2:9). If you love God, you will not love any other god (Exodus 20:3, 2 Corinthians 6:14-18).

Likewise, when a man truly loves you, this will change his relationship with all other women. He will be careful not to put himself in compromising situations. He will make sure other women know he’s treating them as friends and you as more than a friend. And if a woman comes onto him, he will reject her because he wants you, the one woman that he loves (Proverbs 31:29).

4. When a Man Loves a Woman, He Will Tell Her What He Loves About Her

Many guys tell a woman, “I love you.” But when a biblical man truly loves a woman, he will know what he loves about her. In other words, he won’t just say he loves her and then be unable to explain why. If a man can’t articulate why he loves a woman, usually he’s just infatuated with her, likes the way she looks, or is too immature to be able to understand the real value of a godly woman in his life.

When you read through Song of Solomon, for example, there is a back and forth between the man and woman that explains why they love each other. As Proverbs 31:30 states, “Charm is deceitful, and beauty is vain, but a woman who fears the Lord is to be praised.” A godly man knows what to value in a woman.

Give a man time to get to this place. But if he says he loves you but never wants to marry you, he doesn’t really love you. Ideally, soon after he says “I love you,” he will then also be prepared to ask, “Will you marry me?”

Here’s a related article called 5 Things Strong Christian Men Do When They Love a Woman.