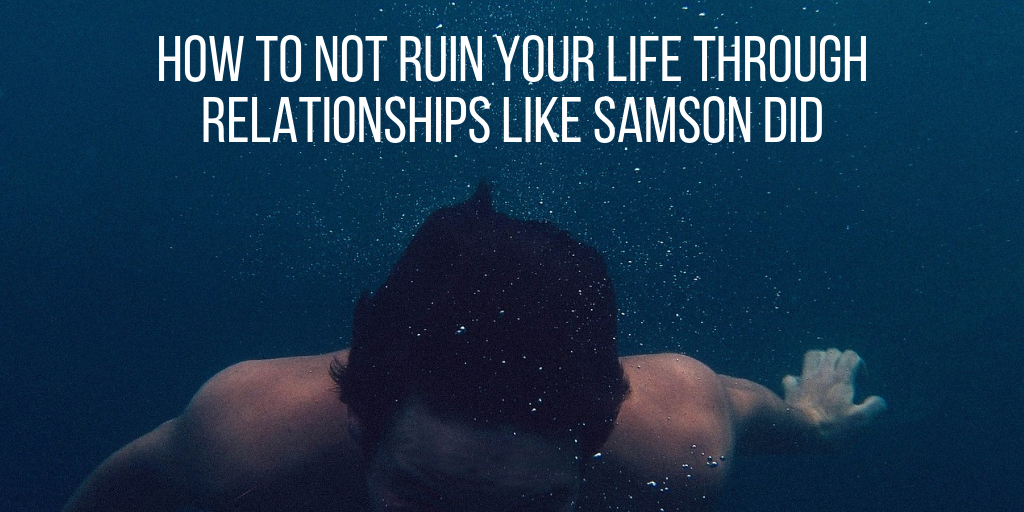 Here are 4 ways to ruin your love life taken right from the life of Samson.

When you read through Judges 13-16, the life of Sampson was a rollercoaster ride caused by poor relationship decisions. One of the primary mistakes that Samson made which Christians can learn from is that he kept falling for women who did not love the one true God.

First Samson falls for a Philistine woman. His parents even warned him not to marry her and they encouraged him to marry a woman who followed the laws of God (Judges 14:1-3). Sampson refused and continued to pursue this woman who did not love God.

Samson’s first marriage ended in disaster and death. As you read through Judges 14 and 15, the relationship started failing right from the wedding day. Samson started to antagonize his wife’s family by making a bet with them that they could not solve his riddle. The family, however, put pressure on his new wife to betray his trust. She gave in to their demands. Judges 14:16-17 explains:

And Samson’s wife wept over him and said, “You only hate me; you do not love me. You have put a riddle to my people, and you have not told me what it is.” And he said to her, “Behold, I have not told my father nor my mother, and shall I tell you?” She wept before him the seven days that their feast lasted, and on the seventh day he told her, because she pressed him hard. Then she told the riddle to her people.”

If you thought Samson would have learned from his mistake, you’d be wrong. In Judges 16:1 Samson sleeps with a prostitute which led to him having to fight off another ambush by the Philistines. In just three verses later, Samson gets entangled with another woman who clearly does not love God:

After this he loved a woman in the Valley of Sorek, whose name was Delilah. And the lords of the Philistines came up to her and said to her, “Seduce him, and see where his great strength lies, and by what means we may overpower him, that we may bind him to humble him. And we will each give you 1,100 pieces of silver.” So Delilah said to Samson, “Please tell me where your great strength lies, and how you might be bound, that one could subdue you.” (Judges 16:4-6)

Samson obviously didn’t trust her because he then lied to her multiple times about the secret to his strength. Even though Delilah continued to show herself as an untrustworthy partner, Samson continued to stay with her for some reason. Eventually Samson caved and told her the real way to make him weak. She instantly betrayed him, “When Delilah saw that he had told her all his heart, she sent and called the lords of the Philistines, saying, ‘Come up again, for he has told me all his heart” (Judges 16:18).

So what’s the lesson for us? Don’t give your heart away to someone who hasn’t given their heart to God. Samson lived a life of constant conflict, turmoil, and fighting because he consistently fell for women who did not love God.

If you want to ruin your love life and sabotage every relationship you get into, just date people who don’t love God and are untrustworthy.

From everything we can tell from Judges 13-14, Samson’s parents seemed to be God-fearing people. One of Samson’s fatal flaws was his refusal to listen to their godly instructions. Judges 14:1-3 states:

Christians are not called to blindly follow their parents, their pastors, or their Christian friends. However, when someone loves us and they know the word of God well, the wise thing to do is to really pay attention to their warnings to us, “The way of a fool is right in his own eyes, but a wise man listens to advice” (Proverbs 12:15).

There’s all kinds of advice in the world, especially when it comes to relationships. So how should we decide who to listen to and who to ignore? A person’s love for you is only half the equation. Sometimes the people who love you the most might mean well but they are unfit to give you relationship advice. Someone’s love for you, therefore, should not be the main reason you listen to their counsel. Rather, you must first listen to godly counsel.

You want to listen to people who truly know the word of God and have learned how to give counsel through a biblical perspective. Not all advice is equal (1 John 4:1). Samson failed here too. Not only did he reject his parent’s advice, he rejected his parents godly advice. His parents really had received special instruction from God (Judges 13:8-14). While Christians today should not rely on someone else’s angelic visitation, Christians can receive words from God through other people when those people are rightly applying the word of God.

Proverbs 30:17 states, “The eye that mocks a father and scorns to obey a mother will be picked out by the ravens of the valley and eaten by the vultures.” Because Samson rejected his parent’s advice and continued to pursue godless women, his sins eventually caught up to him, “And the Philistines seized him and gouged out his eyes and brought him down to Gaza and bound him with bronze shackles. And he ground at the mill in the prison” (Judges 16:21).

If you don’t want to ruin your love life, you should not ignore the godly advice of others.

Another common way to ruin a relationship is to be reactionary rather than learning to prayerfully respond. Samson got into so much relationship trouble because he constantly lived by emotion. He didn’t weigh through consequences of his choices. He just lived in the moment and was controlled by his most immediate impulse.

The only time Samson prayed to God was when he was in a total jam. He didn’t walk with God, but he cried out to God when he really needed something. While God did answer some of Samson’s panicked prayers, if Samson would have lived prayerfully he could have avoided most of that trouble to begin with.

Likewise, God does sometimes rescue us from the consequences of our poor decisions. But not every time. The strategy for a successful relationship and a peaceful life is not to call out to God whenever you are desperate because of your bad choices. If that is how you live your life, eventually God will let you feel the weight of your choices because he loves you. He always disciplines those he loves.

The way, rather, to find consistent peace and health in relationships is by living prayerfully. Samson didn’t live this way. He was constantly in crisis mode and he only called out to God when he finally ran out of other options:

Judges 15:18, “And he was very thirsty, and he called upon the Lord and said, “You have granted this great salvation by the hand of your servant, and shall I now die of thirst and fall into the hands of the uncircumcised?”

Judges 16:28, “Then Samson called to the Lord and said, “O Lord God, please remember me and please strengthen me only this once, O God, that I may be avenged on the Philistines for my two eyes.”

When you walk with God, you will be filled with the Spirit and thus able to give away the love that is being poured into your heart from him. You will not make relationships your god when you are walking with the true God. Rather, when you walk with God, you will seek to glorify him through the relationships you have in your life.

For by the grace given to me I say to everyone among you not to think of himself more highly than he ought to think, but to think with sober judgment, each according to the measure of faith that God has assigned. For as in one body we have many members, and the members do not all have the same function, so we, though many, are one body in Christ, and individually members one of another.”

Sometimes are gifts turn into a curse when they cause us to rely on ourselves. Not only do we need God, for he is the one who gives us the gifts, we also need each other. Christians are the body of Christ, and none of us make a whole body by ourselves. We need support from one another.

Samson really was strong. But his strength ended up being his demise because he relied on himself too much. He ruined his relationships, he ruined his life, and he suffered greatly because of his pride.

If you hope to have a successful Christian relationship that is glorifying to God, in humility you must rely on the power of God and the support of other believers.