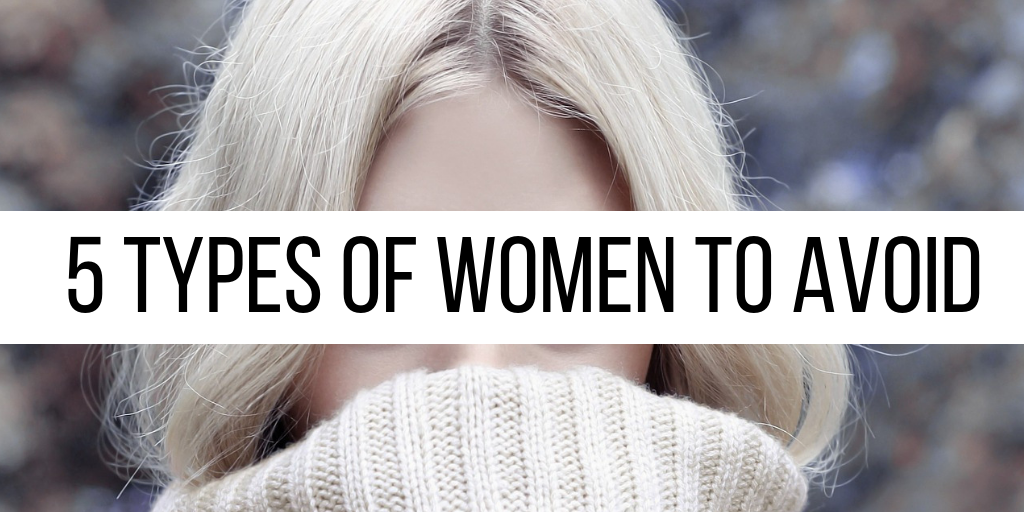 If we wanted to list the red flags to avoid in Christian dating, our list would be never ending. Here are just 5 types of women Christian guys should avoid.

For the 5 Types of Guys Christian Women Should Avoid, click here.

I recently watched a really interesting YouTube video that interviewed men and women while asking them the question, “Can guys and girls just be friends?” What was so interesting was that most of the men said “no” that there will always be some sort of feelings present for something more than friendship. The women, however, said “yes” that guys and girls can be friends.

Now, I know this little video isn’t proof that guys and girls can never be friends. I do think, however, that it is a common thing for women to want a friendship with a guy even though she knows the guy wants something more than a friendship. She is often willing to play dumb and pretend like she doesn’t know that he obviously really likes her.

There’s nothing wrong with this if she isn’t sure if she likes him and just wants to feel it out in friendship first. But when a woman just wants to string a guy along in friendship even though she knows he likes her but she has no intentions of dating, this is the type of woman a Christian guy should avoid.

All he will accomplish by orbiting around her will be causing confusion for himself. He will waste his time pursuing a girl in friendship because he thinks he might get to date her one day. If you really have a chance, go for it. But you could waste months or even years of emotional energy playing these games if you are not honest with yourself as a man.

No one who practices deceit shall dwell in my house; no one who utters lies shall continue before my eyes.” (Psalm 101:7)

Avoid the woman who wants to be close friends even though she obviously knows you like her.

Avoid the Woman Who Flirts With Everyone

I don’t think all types of flirting is sin. However, being flirtatious with everyone you meet is not a good sign. As a man, you will be susceptible to a woman who shows interest in you and is making you feel like she desires you. God wired men to be attracted to women. Attraction itself is not sinful. You should be attracted to the woman God has for you. However, if a woman is trying to get every guy she meets to be attracted to her through her flirtatious demeanor, then you should avoid her.

In Proverbs 7 we are warned to avoid the adulteress woman. The woman described there sounds very similar to a woman who flirts with every guy she meets, “She is loud and wayward; her feet do not stay at home; now in the street, now in the market, and at every corner she lies in wait” (Proverbs 7:11-12).

A woman who likes to be liked by every man is dangerous. Don’t let her fool you. Avoid her. Even if you like the games she is playing with you, just know she is playing those same games with everyone else too.

Another common practice by the woman who just likes to be liked is only showing interest in a guy once he finally starts moving on from her. She doesn’t actually like him, but since she senses that he is starting to not like her, this causes her to give him some attention so he will keep having feelings for her.

If woman only likes you because she is jealous of a new relationship you are having, she doesn’t actually like. She might feel like the does, but in reality her motives for giving you attention all of a sudden are completely self-centered.

If you make the mistake of starting to like her again, once she senses this she will again leave you hanging and you will be right back in no-man’s-land.

Avoid the woman who only likes you once you start to show her less attention.

Sin is when we use a good thing in a bad way. One woman who you will want to avoid is the woman who satisfies her desire for connection in a sinful way through gossip and drama. In 1 Timothy 5 Paul is giving instructions about women to help them in their younger years from straying away from God. When a younger woman does not honor God in her life, Paul states, “Besides that, they learn to be idlers, going about from house to house, and not only idlers, but also gossips and busybodies, saying what they should not” (1 Timothy 5:13).

If you are a man who tries to avoid drama and unnecessary crisis, you will want to avoid these type of women who have a nose for conflict. They are the type of woman who always complains with, “Why does this always happen to me?” Well, drama and turmoil often happen to the same people over and over again because those same people keep trying to find it, “Whoever meddles in a quarrel not his own is like one who takes a passing dog by the ears” (Proverbs 27:17).

There are many other red flags a Christian man should look for while pursuing marriage. But one of the most challenging situations is when you find a girl you really like but she just cannot stop doubting your faithfulness. Usually this occurs when she has been betrayed in her past.

While many times the faithfulness of a man can be used by God to be a part of the healing process for a woman who had been betrayed in the past, there are situations where no matter how hard a man tries the woman is just not able to function normally in a healthy relationship.

If she refuses to trust you, if she constantly accuses you of cheating, if she starts imagining that you are lusting after every woman who walks by, if she refuses to work on this issue in her heart and she just wants you to make her feel secure – there’s really nothing you can do.

This type of woman needs healing from Jesus before she will be ready to trust you in a relationship. If you try to be with her before she works on the wounds of betrayal in her heart, the odds will certainly be against you.

Of course there are levels to our wounds. None of us are perfectly healed people. So if a woman struggles with feeling betrayed but she knows she needs to work on this and is willing to get help, that’s a different story. But if she believes her feelings of betrayal are rooted in your lack of faithfulness and she cannot see that her own wounded heart is manifesting these fears, then this is not the type of woman who is ready for a Christian relationship.